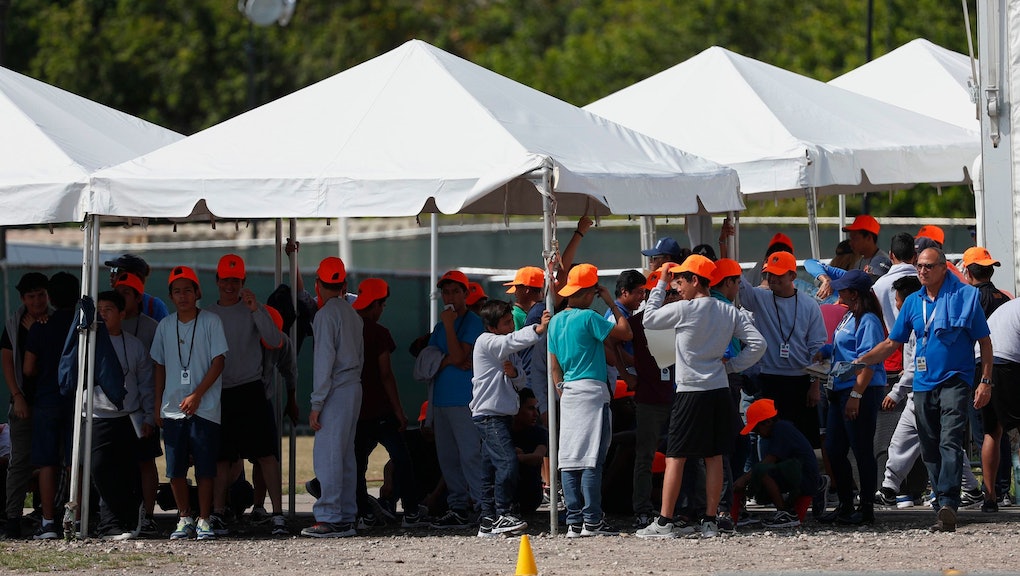 Since 1997, the United States has had a precedent on the books that restricts the amount of time that the government can legally detain an immigrant child. On Wednesday the Trump administration announced a new rule that effectively guts the protections already on the books. Under the planned guidance, Immigration and Customs Enforcement will be able to detain migrant families, including children, indefinitely until they are able to receive a hearing for their case seeking entry — a process that can take up to a full year.

The Trump administration claims that it needs to make this rule change in order to deal with the increased level of migration at the U.S.-Mexico border. The U.S. Customs and Border Protection claims that it has apprehended more than 430,000 families at the border since October. Acting Homeland Security Secretary Kevin McAleenan, who announced the new rule, claims that an inability to detain those families is "incentivizing illegal entry" into the country. Essentially, the administration believes that if people are worried they will be locked up for an extended period of time, they won't bother coming — knowing full well that doing so will also deter asylum seekers who come to the border in search of respite from violence and persecution in their home country.

The administration's rule will go into effect 60 days from Friday, when it will officially be published. However, the rule will have significant obstacles to overcome before being implemented. A legal challenge is all but guaranteed, which could delay the rule indefinitely. The American Civil Liberties Union (ACLU) has taken a firm opposition to the administration's position. "The government should not be jailing kids, and certainly shouldn’t be seeking to put more kids in jail for longer," the organization said in a tweet. "This is yet another cruel attack on children, who this administration has targeted again and again with its anti-immigrant policies."

At issue with the administration's new plan for indefinite detention is the Flores Settlement Agreement, a 1997 court order that set up standards of care and limitations on detention periods for minors taken into federal custody. Under those rules, authorities can only detain minors for a maximum of 20 days. The ruling also set up guidelines for conditions at detention centers and established requirements for care that the government must provide, including food, water and medical care. The Flores Settlement was strengthened by a 2015 federal court ruling that established it should also be applied to families traveling with children, meaning the entire unit including the parents could not be detained for more than the 20-day period. The Trump administration has characterized that 2015 decision as a "loophole" and views its new rule as an attempt to close it.

What the Trump administration either fails to account for or chooses to ignore is that the 20-day period set by Flores is not arbitrary. Research suggests that extended time spent in detention centers is detrimental to the health of children. UNICEF warned that extended stays in detention facilities expose children to the risk of exploitation and abuse. It also restricts their access to health care, deprives them of nutrients essential to healthy growth and limits their ability to play and learn at a time when their bodies and brains need it the most. It can also lead to stress and trauma that causes long-term harm to their mental and physical health. The American Public Health Association has warned that detaining children increases the risk of a widespread public health crisis. Even just a few weeks spent in government detainment centers can produce long-term negative health outcomes for young people, according to a 2015 paper published in the American Journal of Orthopsychiatry.

Despite the wealth of evidence that detaining children and families is a detrimental policy and carries a significant financial cost of as much as $200 per day for each person held in custody, the Trump administration wants to move forward with its new rule to hold families and children indefinitely. The plan will undoubtedly produce harmful health outcomes for those detained in centers that provide poor standards of living and inhumane conditions, needlessly putting the lives of children at risk in a misguided attempt to deter people from crossing the U.S. border.