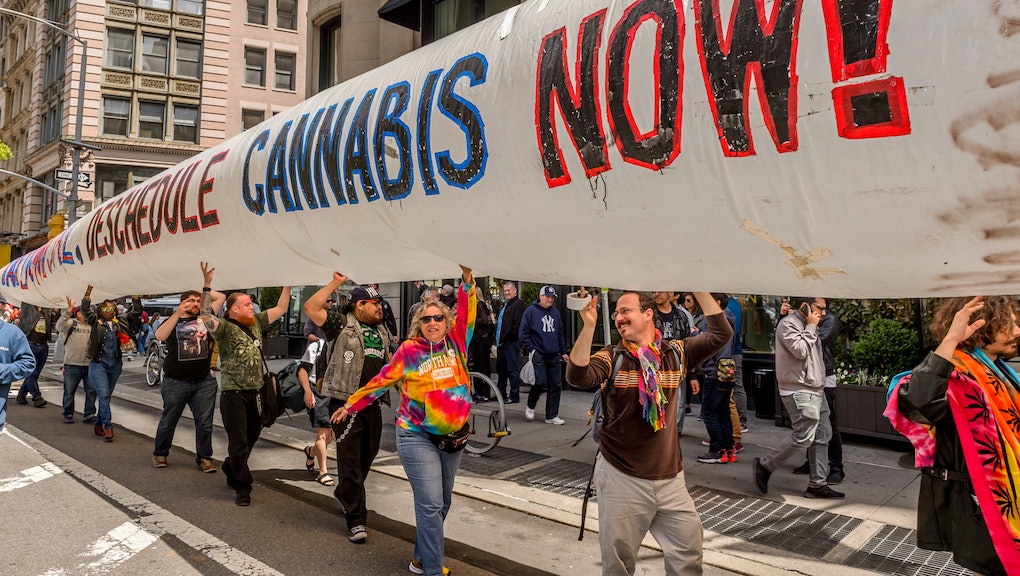 The march toward full cannabis legalization took a major step forward Wednesday, with New York Gov. Andrew Cuomo's announcement that he'd signed into law the just-passed legislation allowing recreational usage, as well as the expungement of many past marijuana convictions.

This is an unambiguously good thing, and will hopefully serve as a tipping point for other states which have thus far not taken up — if not overtly resisted — efforts to legalize recreational cannabis, despite the criminal justice and economic boons legalization brings.

Of course, not everyone is thrilled with New York's looming reeforall (reefer + free for all). Take top New York City Police Commissioner Dermot Shea, who's being a real bummer about this whole thing.

"It’s a significant shift," Shea told PIX11 on Wednesday, after Cuomo's announcement. "You pass new laws and you always worry about what the unintended consequences are. I have no doubt that they think they are doing the right thing but these are some of the things I worry about and New Yorkers are worried about."

Never mind the tens of thousands of jobs and hundreds of millions of dollars in expected revenue that legalization is expected to eventually bring to the state. And never mind the more than 2-to-1 margin by which New Yorkers support legalization. And please, whatever you do, do not mind the fact that nearly 95% of last year's marijuana arrests by the NYPD were of people from Black and Latinx communities. Oh no, instead, Shea is mostly concerned about ... parades?

"I don't know what we're going to be telling New Yorkers when they call up and say there's people smoking in front of my house or apartment building," he opined. "Or I take my kids to a parade, whether it's on Eastern Parkway or on Fifth Avenue, and there are people smoking marijuana next to me as I try to enjoy the parade."

The issue, Shea explained, is that New York's new law will seemingly allow people to smoke grass outside. Oh no!! Please feel free to take a moment for yourself to internalize this shocking news.

"That's not something that most other states did," he said. "They legalized marijuana but it was still illegal to smoke outside and in public."

Ultimately, most cannabis calls are "not going to be a police matter" anymore, Shea warned, which ... yes, that's the whole point.

Think of it this way: Shea's job is to enforce laws. And now, suddenly, the NYPD has been given a massive gift: one fewer law to enforce! You'd think they'd be happy about that, right? One less thing for the NYPD to worry about. Now the department can take the time it would have spent fielding what Shea described as "tens of tens of tens of thousands” of marijuana complaints, and instead use it to focus on other, more important things.

And yet, here's New York City's chief law enforcement official throwing himself a big big pity party over the death of a set of rules that overwhelmingly affected communities of color. Weird!

More like this
Another reason to legalize weed: It'll be better for the environment
By AJ Dellinger
Can CBN help you sleep? The science behind the trendy weed compound
By Melissa Pandika
How going “California Sober” became the pandemic-era vibe
By Tracey Anne Duncan
Stay up to date