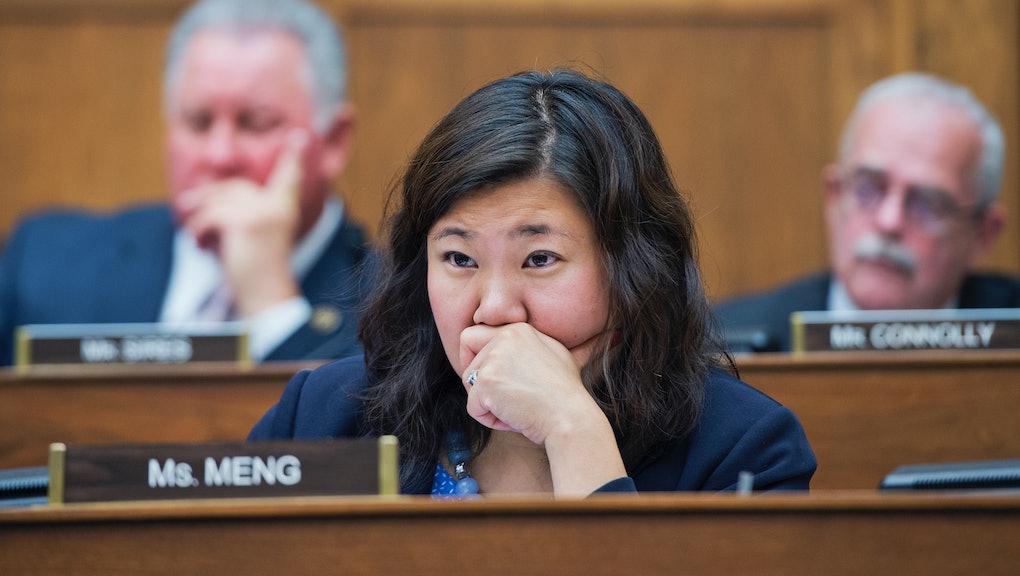 Asian Americans are being spat at, verbally harassed, and physically assaulted in incidents New York Rep. Grace Meng (D) has directly connected to President Trump's rhetoric about coronavirus. Throughout the duration of the global pandemic and coronavirus outbreak in the United States, Trump has continually used pejorative and racist terms for the virus that essentially blame Chinese people for the health crisis.

“The increased use of anti-Asian rhetoric, particularly from our nation’s leaders such as the president, and their use of terms like ‘Chinese virus,’ ‘Wuhan virus,’ and ‘Kung-flu,’ is not only irresponsible, reckless, and downright disgusting, it threatens the safety of the Asian American community,” Meng said in a press release announcing her resolution to denounce leaders who perpetuate racist language. “Such language demeans, disparages, and scapegoats Asian Americans.”

There have been reports from across the country of violence or harassment against Asian Americans that is thought to be related to the coronavirus outbreak. In New York City, a man reportedly verbally and physically attacked a Chinese woman wearing a face mask in February, calling her "diseased." The attack is being investigated as a hate crime.

In Yakima, Washington earlier this week, an Asian-American restaurant was graffitied with a pejorative slur. And in Los Angeles, a CNN reporter was attacked with a racial slur while reporting on the increase of anti-Asian American racism in the country.

Last month, at a Sam’s Club in Midland, Texas, a man attacked a Burmese family with a knife. An FBI report of the incident stated: “The suspect indicated that he stabbed the family because he thought the family was Chinese, and infecting people with coronavirus.” The Anti-Defamation League has compiled a comprehensive list of recent similar attacks.

Trump has continued to use language that maligns and demeans Asian Americans, even as reporters have started to ask him directly about his influence on reported violence. The president has said, though, that his language is appropriate because as he sees it, given that the first reported case of coronavirus came from Wuhan, China, the virus is in fact "Chinese."

The White House has also erroneously cited the fact that previous outbreaks, like the Zika virus, Ebola, and West Nile virus, were named after geographic regions, as justification for Trump's racist language. But leaders said they specifically wanted to learn from the mistakes of past naming practices this time around. In 2012, the WHO named an outbreak originating in Saudi Arabia the Middle East Respiratory Syndrome; the organization did not want to do something similar with COVID-19, acknowledging that certain names can create "unnecessary fear for some populations."

In the U.S., hateful speech has a long history of leading to physical violence. “You can see this throughout history,” Danyelle Solomon, the vice president of race and ethnicity policy at The Center for American Progress Action Fund, tells Mic. Any effort to fight for racial equity that challenged the power of white people, such as 1960s integration, has been painted as the fault of African Americans. After 9/11, Muslim Americans were attacked; after the H1N1 outbreak, Mexican Americans were targeted.

The current anti-Asian sentiment is a continuation of an age-old American problem, Solomon says. “There’s always a scapegoat, and the scapegoat has typically been people of color.”

Xenophobia, racism, and violence can have long-term impacts on the mental, emotional and physical wellbeing. A Lehigh University study found that the impact of the racism endured by Asian Americans during the SARS (severe acute respiratory syndrome) outbreak in 2008 lasted long after the pandemic subsided. The portrayal of Asian people as responsible for transmission “transcended into discrimination, alienation, and racial harassment,” the research says, and “as a result, individuals faced economic and employment obstacles. Groups of Asian citizens questioned their own personal self-image and longed for a sense of belonging within their respective communities.”

In years past, leaders have attempted to push back on scapegoating, Solomon says. But what makes coronavirus different now is that "we actually have a president who is fueling ... this instead of helping to mitigate."