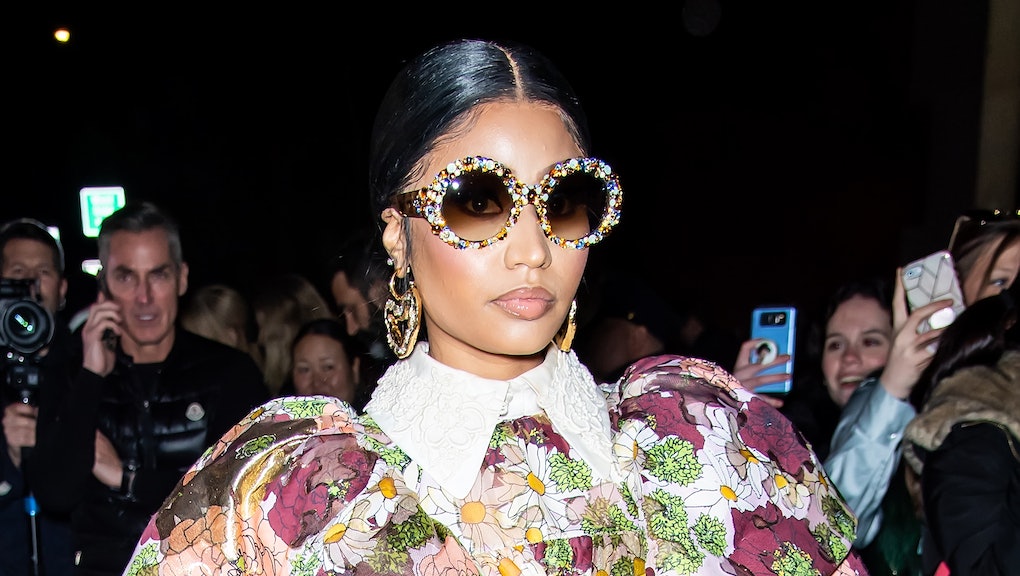 On August 13, Minaj and her husband Kenneth Petty were sued for allegedly harassing and intimidating Jennifer Hough, the woman who accused Petty of sexual assault in 1994. After more than a decade, Nicki Minaj could possibly be at a crossroads unlike any other in her career: her husband or her legacy.

Petty was convicted of attempted rape in the first degree in April 1995 after Petty allegedly began sexually assaulting Hough at knifepoint before she struck him with a bottle and escaped. Both were 16 years old at the time and Petty served nearly four years in prison until his release in January 1999. The new suit alleges that in 2020, Minaj personally called Hough offering to fly her out to Los Angeles, to which she declined by allegedly telling the rapper, "I need you to know woman to woman, that this happened.” The suit alleges Hough and or her family members were later offered bribes in exchange for her recanting her story. Payments between $20,000 - $500,00 were allegedly offered in addition to the offer of Minaj sending birthday videos to the victim's daughter. After Hough repeatedly refused, she recalls being contacted by one of Petty's lawyers about a recantation letter in fall 2020.

Petty was charged in February 2020 for failing to register as a sex offender in Los Angeles between July 2019 and November 2019, after moving from New York to Los Angeles where he and Minaj reside. Petty struck a plea deal a week before Hough filed her lawsuit, with the mandatory minimum sentence for his offense being five years of supervised release. This is just the latest strain this relationship has had on Minaj's reputation.

Once Minaj began posting photos of the pair on Instagram in late 2018, the typical investigative machinations of the internet went in motion and her beau's past rape conviction was brought to the light. With the spotlight burning into Petty's past, Minaj started feeling the heat for dating a registered sex offender and decided to brush off the flames by not only defending him, but casting doubt on the original conviction altogether in an Instagram comment.

In December 2018, soon after making the relationship Instagram official, Minaj responded to a fan on social media platform who questioned why Petty was even being referred to as a rapist since the alleged rape occurred more than 20 years earlier and both he and the victim were both teenagers. In her response, the rap empress added that both were also in a relationship, seemingly insinuating this caveat indicates the sexual interaction may have not been forced. Less than a year later, a few weeks after Minaj and Petty got married on October 21, 2019, Minaj turned her marital bliss into an even more hardened resolve of her husband's innocence, going on her popular Apple Music radio show Queen Radio to further disparage Hough. In the November 1 episode, the multi-platinum megastar claimed Hough wrote a letter to the judge of the 1995 case recanting her allegations and was informed that she would go to prison for 90 days if she recanted her statements.

Minaj misrepresented Hough's actions to intentionally paint a sexual assault victim as a liar. In an interview with New York Times, Hough did request the charges be dropped, but only after her family encouraged her to do so following the neighborhood harassment she endured during the trial. According to Hough's lawsuit against Minaj and Petty, her request was denied because Petty had already accepted a plea deal. Then, 25 years later, she's allegedly encouraged into recanting her statement again, but this time by Minaj herself.

Unfortunately, victim blaming an alleged sexual assault survivor in order to serve her own self-interest is not far off from the Nicki Minaj that the world has been exposed to over the last few years. Three years ago, Minaj childishly berated culture writer Wanna Thompson in a series of Twitter direct messages over Thompson tweeting sensible critiques over wanting more mature content from Minaj. When she faced warranted backlash over her 2018 "Fefe" collaboration with 6ix9ine, who was convicted of sexual misconduct with a minor as a teenager, she first dismissed it on Twitter as an industry conspiracy to discredit her. Days later on Beats 1 Radio, she defended the decision the same way all abuse apologists do: appeal to a personal knowledge of the person's character. "When I know somebody there’s nothing you can tell me about him. That’s just how it is."

Was it 6ix9ine's gracious character which made her overlook such a reprehensible conviction, or the fact every song the rainbow faux-'Pac released up until "Fefe" had reached Billboard? Her husband is the second man convicted of sexual misconduct she's publicly placed her support behind over the same three years that has seen female rap history be made without her. Women who rap rose to unprecedented heights in the last 18 months, with Cardi B becoming the first female rapper with five #1 singles, Megan Thee Stallion becoming the first female rapper to take home the Grammy Award for Best New Artist in the 21st century, and three different women who rap being on three of the 25 most popular songs on the Billboard Hot 100 in 2020.

Outside of a few scattered guest appearances and a nostalgic re-release of her 2010 seminal mixtape Beam Me Up Scotty, the world got a glimpse of life without her and, at worst, there wasn't a noticeable difference. She can no longer throw stones from her queendom without risking irrelevancy. With her husband's best immediate outcome being registering as a sex offender in the state where they raise their son and subjecting to five years of supervision, Minaj will not be able to run away from this issue.

More like this
Nicki Minaj's cursed vaccine tweets show celeb transparency is a slippery slope
By Keith Nelson Jr.
The moral of Nicki Minaj and the Tale of the Giant Balls? We need to explain vaccines better
By Kara Weisenstein
Lil Nas X delivered his baby, 'Montero,' along with an ill-fated love story
By Kara Weisenstein
Stay up to date