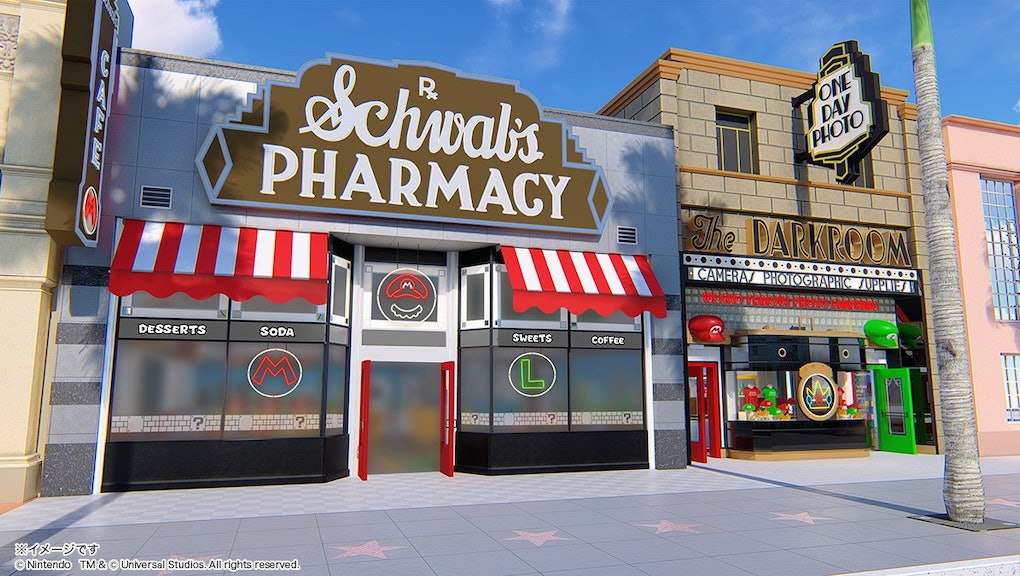 Before the pandemic, Universal Studios Japan (USJ) and Nintendo announced an upcoming "Super Nintendo World" theme park filled with iconic Mario characters and items. The park was supposed to open in 2020, just before the Summer Olympics, but then coronavirus hit. Wednesday, the companies announced the park will finally open in Spring 2021, and have decided to give eager guests a literal taste of what's to come with a Mario Café & Store, opening on October 16.

The café, located in USJ's Hollywood Boulevard section, is decorated wall-to-wall with colors and items that will be familiar to Mario fans: question-mark blocks, green pipes, mushrooms, and Mario and Luigi-themed food.

The menu includes cream and fruit-filled "Pancake Sandwiches" shaped after Mario and Luigi's hats, "Fruit Cream Sodas" with mustaches that match to each brother, and a "Super Mushroom Drink Bottle," along with other soft drinks.

The store next to the café will handle all your merch needs. There, you can get your own Mario and Luigi hats, and even Princess Peach's crown, if that's more your style.

There are also other items in the "Whose Cap?" lineup, which appears to be a theme that asks you to recognize who that cap (or crown) belongs to. Some of the merch previews include a shirt, a pouch, and a cushion.

Attendees can expect to see rides based on Mario Kart and Yoshi when the park opens in spring, as well as an interactive experience that the park designers hope will emulate the interactivity of video games.

Theme park guests can buy a "Power-Up Band" that links to the Universal Studios Japan app on their smartphones. By doing certain activities in the park, like hitting the question-mark blocks, you can collect coins just like Mario. There are also achievements to earn that will reward you with characters' stamps, which also give coins.

The coins will be tallied through the app, where you can see your ranking in a coin-collecting competition with other park guests.

There's even a music video featuring Galantis and Charli XCX that Nintendo released in anticipation of the theme park's opening.

It's super cheesy, but full of color and cheer. What more do you need when it comes to a Nintendo-land, really?

If you're not looking forward to international travel, you can take comfort in the fact that there are future plans to bring Super Nintendo World to Universal Orlando through the Epic Universe theme park. You may have to wait a couple years, though, as Epic Universe isn't expected to open until 2023.

All things considered, Super Nintendo World sounds like it's shaping up to be a pretty fun place where you can pretend to be a mushroom-eating plumber who repeatedly saves the world and the princess of the Mushroom Kingdom while riding around on a green dinosaur.