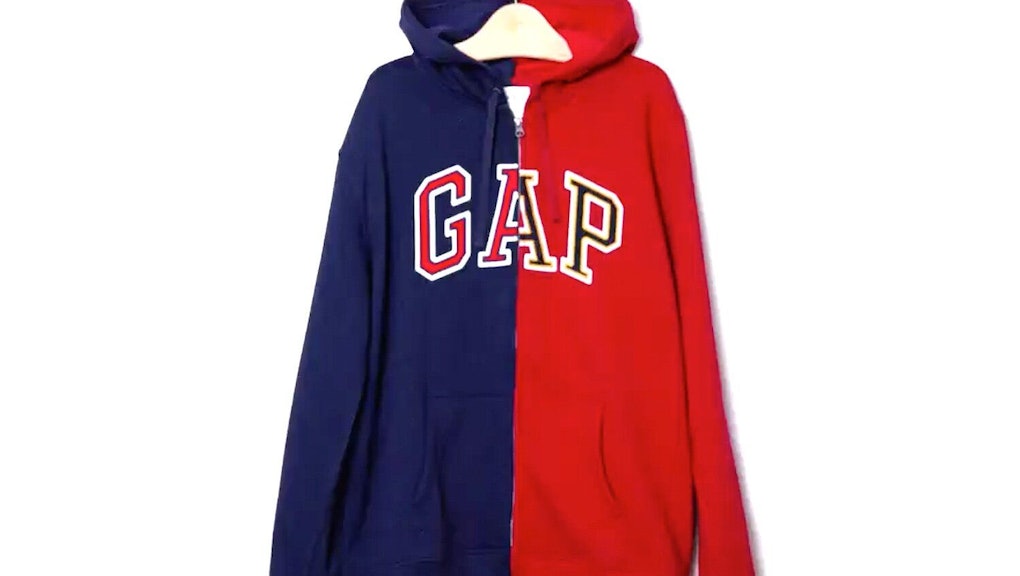 No, Gap, a hoodie won't bring us together

As the presidential election results continue to depict a very divided US, many wonder what it will take to bring us together. Well, Gap had a suggestion and it really didn’t go well. As the fate of our country hangs in the balance, the clothing retailer thought it would be a good idea to tweet a GIF of a half-red and half-blue hoodie being zipped up. The caption read: “The one thing we know, is that together, we can move forward.”

Of course, Twitter was quick to roast Gap for what many felt was a tone deaf tweet. One person tweeted what many were thinking, writing “Thanks @gap i’m gonna wear this on the battlefield in the civil war to symbolize how we should all be getting along better.” Even Chrissy Teigen had to comment on the ridiculous concept tweeting, "yay we can just walk sideways depending on the city we're in." Gap eventually deleted its post.

“From the start we have been a brand that bridges the gap between individuals, cultures and generations,” the company said in a statement to the New York Times. “The intention of our social media post, that featured a red and blue hoodie, was to show the power of unity. It was just too soon for this message. We remain optimistic that our country will come together to drive positive change for all.”

Also clarifying that the hoodie with the power to unite Democrats and Republicans post-election is not even for sale. Clearly Gap didn’t learn anything from Kendall Jenner’s poorly received Pepsi commercial that similarly suggested its product could end racial inequality in the US.

The ill-advised tweet comes as the iconic retailer is attempting to save its struggling brand. After experiencing plummeting sales, it announced a 10-year partnership with Kanye West that will hopefully bring its relevance back. The rapper and designer will create a new clothing line called Yeezy Gap, that is set to be released in the first half of 2021.

More like this
“A.I. is actually the fastest path to communism,” and other thoughts from Grimes that make no sense
By Rafi Schwartz
“Exhilarating, joyful, and of course pretty scary": Musicians on the pressures of returning to the stage
By Kelly McClure
'Starstruck' will melt your icy heart and make you believe in love again
By Kara Weisenstein
Stay up to date