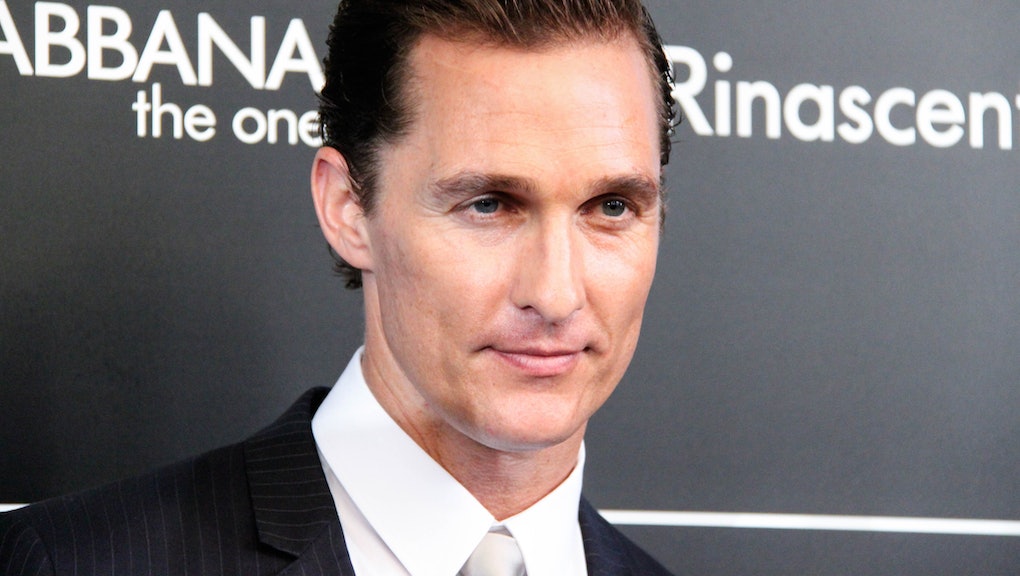 No, Matthew McConaughey, you should not run for governor of Texas

Matthew McConaughey — everyone’s favorite car commercial star, ageless slacker, and Oscar-winning actor — is now the latest celebrity to toy with a run for public office. As The Hill points out, McConaughey said he would consider running for governor in Texas on Tuesday’s episode of the Hugh Hewitt Show.

Chatting with one of the most vociferous war hawks in America is never a promising venue to flirt with a political career, but McConaughey seems highly tentative about a gubernatorial run. “I don’t know. I mean, that wouldn’t be up to me. It would be up to the people more than it would me,” he said. “Politics seems to be a broken business to me right now. And when politics redefines its purpose, I could be a hell of a lot more interested.”

The Dazed and Confused star leans heavily on “personal values” and restoring trust in American institutions to bridge the gap across party lines — familiar, inoffensive rhetoric if you’ve been listening to the president-elect:

“That leads to us not trust in ourselves, which if that becomes epidemic, then we’ve got anarchy...I’m all for the individual, and I think it’s for — to make collective change that the individual needs to look in the mirror and say, 'How can I be a little bit better today?'”

McConaughey’s politics have long appealed to the sort of blithe neutrality that’s common among entertainers who don’t want to alienate any segment of the fanbase. While it’s hard to imagine him compromising his near-universal public goodwill to pursue a government career, he’s certainly approaching these issues from a limited understanding of the more sinister forces that breed irreparable division and distrust. He also spoke with Esquire on Tuesday, expanding on these We Live in a Society ruminations:

“We're looking at politics and we're going, What's your purpose? What is politics?... We're supposed to follow you, you’re leaders? It sounds like a pep rally. All these stations put the news out and it all sounds like soft pornography."

Tempting as it is to imagine America learning from the whole Inexperienced Celebrity as Elected Official debacle, the cycle will certainly repeat itself somewhere down the line. Although if he’s waiting until politics becomes less of a “broken business,” McConaughey likely won’t be the next guy to give it a shot.

More like this
In 'Roadrunner,' Anthony Bourdain shows us the beauty of the mundane
By John Saward
Ted Cruz and Matt Gaetz are the last people who should be talking about #FreeBritney
By Chloe Stillwell
Phoebe Bridgers and John Mulaney announced tour dates and the internet imploded
By Chloe Stillwell
Stay up to date