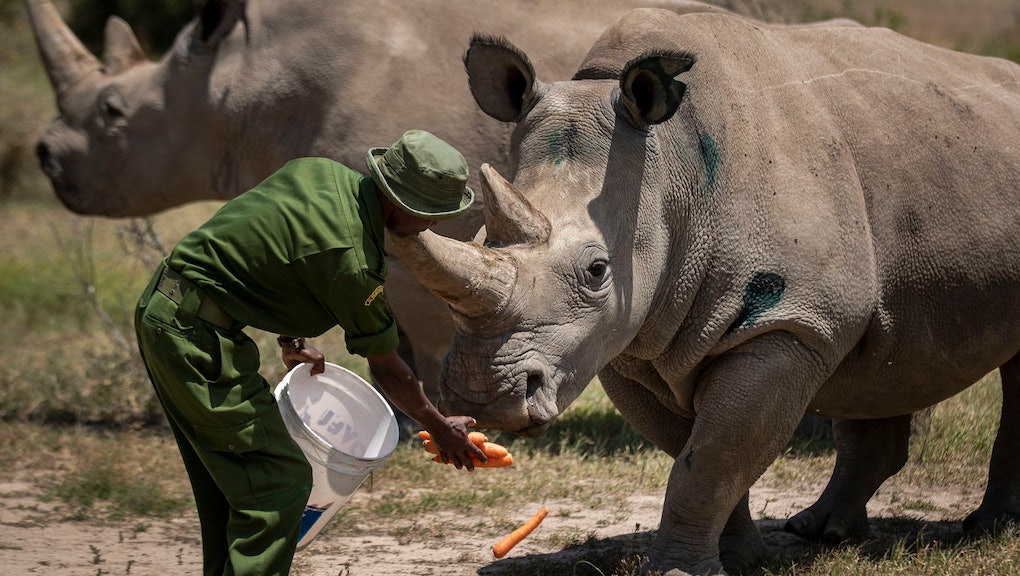 This is the first experiment of its kind for rhinos. According to The New York Times, in vitro fertilization is "commonly performed in humans and livestock," but no so much with other species. With seven of the ten eggs successfully fertilized, researchers are hopeful to see if the eggs will develop into embryos.

If the fertilized eggs develop without issues, the scientists believe they can use a surrogate rhino mother to carry the baby to term. They're looking at southern white rhinos to do the job, since the two northern whites remaining aren't physically able to do so. Whether the eggs result in a baby rhino or not, Jan Stejskal, director of international projects at Dvur Kralove Zoo, told The New York Times he was still proud of the team's efforts.

"We were really able to do something no one before has been able to do,” said Stejskal. "We still don’t know whether we’ll have embryos, but it was successful anyway. We proved that there is a real chance for them to have offspring."

The decimation of the northern white rhino population is a consequence of human actions; poaching and habitat loss eventually led the species to extinction in the wild by 2008. The only rhinos left could be found in zoos all over the world. Their numbers eventually dwindled as the rhinos died due to age or other causes.

Even if the eggs become embryos, there is still a great concern about inbreeding and healthy genetics for future generations. Researchers have preemptively anticipated this difficulty, and stored a collection of frozen sperm from other male northern white rhinos to prevent that from happening. However, the chances for survival are still slim, and all this effort is making critics wonder if their energy couldn't be better used for other species at risk of extinction.

Dr. Frank Goeritz, a veterinarian who took part in the egg extraction process, seemed to disagree with critics in a comment to The New York Times.

"It’s not only about saving the northern white rhino," said Dr. Goeritz. "We gained so much knowledge, and we used technology that we can now apply way earlier for other endangered species before they reach this situation."

Whether we can expect new northern white rhino babies in the future is still in the air. The entire process takes a long time — possibly years — but the science team behind the successful fertilization is hopeful that their techniques and methods can help more endangered species, or even extinct species, make a fresh comeback.