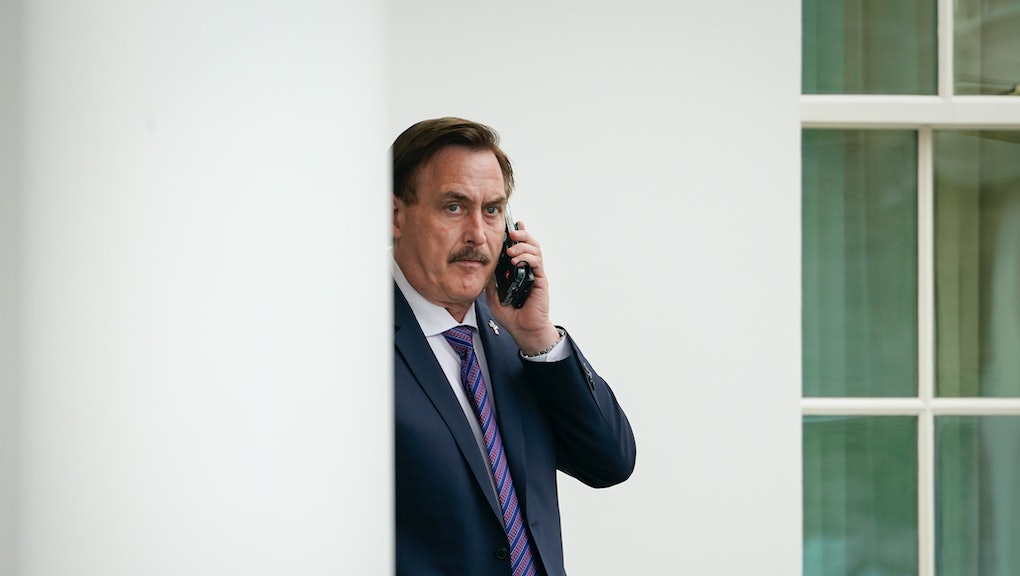 MyPillow CEO Mike Lindell is many things: a successful business owner, an unhinged conspiracy theorist, a walking legal liability. What Mike Lindell is not is a Republican governor, which is probably why he was ignominiously booted out of the Republican Governors' Association spring conference Tuesday. Go figure.

Lindell, who entered the national consciousness as one of former President Donald Trump's more, um, enthusiastic fascism enablers, told Politico on Wednesday that he'd flown to Nashville, Tennessee, for the RGA's spring conference, only to be denied entry just moments after collecting his credentials at the hotel desk where the event is being held this week. An official with the RGA confirmed to Politico that Lindell had indeed attempted to join RGA members for a dinner at the Tennessee Governor's Mansion in the Nashville suburb of Oak Hill.

"These events are for RGA members," the official said. "Mike Lindell is not currently an RGA member."

True as that may be, Lindell has attended RGA conferences in the past, including the winter 2020 event as a guest of former Virginia Gov. Bob McDonnell. There, Lindell claimed, "everybody encouraged me [to run for governor of Minnesota]. There was a lot of encouragement."

Before his bungled attempt to embed himself with actual elected officials this week, Lindell was interviewed by former Trump White House official, far-right nationalist, and accused criminal fraudster Steve Bannon, where Lindell predicted he'd have "interesting conversations" with Govs. Doug Ducey of Arizona and Brian Kemp of Georgia — two states at the heart of the pathetic "Big Lie" effort by Lindell and others to overturn the results of the 2020 presidential election.

Lindell confirmed to Politico that after his unceremonious booting from the RGA conference, he'd be taking a private jet out of town, which seems like a waste of a perfectly good opportunity to hang out in Nashville. Oh well.

Lindell will, however, be appearing next month in Somerset, Wisconsin, where he'll headline a MAGA Frank rally, named after his deeply uninteresting social media platform Frank Speech. Joining him for the "family friendly" event ("please no coolers") will be convicted felon Dinesh D'Souza and infamous plagiarist David Clarke. Sounds fun!

More like this
57% of Republican voters believe Trump only lost because of fraud, per a new poll
By Rafi Schwartz
Trump wanted to quarantine Americans at Gitmo last spring, according to a new book
By Rafi Schwartz
QAnon followers are pretty dejected by Trump's speaking tour with Bill O’Reilly
By AJ Dellinger
Stay up to date