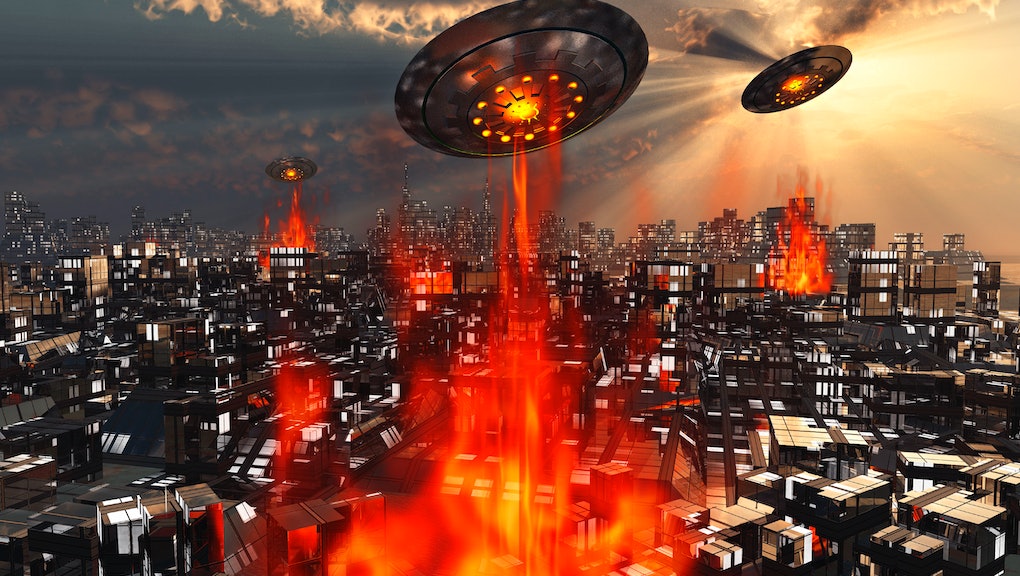 An oddsmaker explains why aliens are most likely to attack the U.S. first

For decades now, there have been unexplained objects making their way across our Earthly skies — UFOs and other unidentified aerial phenomena (UAPs) that appear to be technology so advanced that even the U.S. military has no idea what they might be. With these sightings seemingly on the rise, and footage of these potentially alien aircraft being confirmed by government agencies, it makes you wonder: What are the odds that we're really, truly alone in the universe?

Well, funny you should ask. If you ask BetOnline, a popular online sportsbook, there is about a 4.8% chance that aliens have made contact with us. That is the implied probability of a bet that you can place on the platform, which has +2000 odds, or a 20-to-one payout. In human terms: If you put down a $100 bet that aliens exist, and it turns out they do, you would win $2,000.

A quick caveat on this bet: The sportsbook states that you are betting on the National Security Agency (NSA) confirming any past contact between aliens and humans, and that confirmation has to come before the end of 2021. Sportsbooks don't love open-ended bets that can be left open to interpretation, hence the timetable and the narrow definition of what will be considered proof of alien life. Sorry, but if your neighbor says their third-cousin's girlfriend's uncle was abducted by aliens, that's not going to cut it.

BetOnline is no stranger to setting odds on events. But figuring out the likelihood that aliens are out there is an entirely different proposition than setting the line for your average basketball game. In sports, there is plenty of information to bring into the odds-making process. You know the roster of each team, the capabilities of the players, their history of performance together, and a general sense of how well the teams match up against one another. None of that is data is available when determining if aliens exist.

"These aren't sports odds that we traditionally set, so there is obviously no algorithm or past precedent that we can use as a starting point," Adam Burns, the odds manager at BetOnline, tells Mic.

Similarly, it's hard for a sportsbook to get its ideal outcome on a bet like this. As a general rule, oddsmakers want to set the gambling line right in the sweet spot so that it attracts equal bets on either side. That's kind of out the window on a bet that isn't based on any sort of data or existing evidence. Instead, Burns says, the focus for these odds has more to do with getting people interested than setting the perfect line. "At the end of the day, we're going to create a market that is intriguing and fun for the bettors, as well as the media," he explains.

Burns and BetOnline didn't stop at just setting the odds for the potential existence of extraterrestrial life. You can also bet on the likelihood that aliens attack us. The current odds of that happening, per BetOnline, is +10000. If the NSA confirms at any point in 2021 that aliens have attacked Earth, you can get a 100x return on your bet — put down $100 and win $10,000.

"Let's not sugarcoat the fact that Americans are the loudest, boldest, and brashest people on the planet, so it makes sense aliens would want to eradicate them first."

Want to get even more specific? BetOnline even has odds on which country gets invaded first. The current favorite: the United States, with +1000 odds — a 10-to-one bet that would pay out $1,000 on a $100 bet. The implied probability of the U.S. getting hit first, according to these odds, is 9.1%.

In sports betting, there is a scale-tipping factor that oddsmakers have to take into effect with certain popular teams. Teams that are well-known and have huge fan bases — think the Dallas Cowboys or Los Angeles Lakers — are known as "public teams" because they are likely to attract more attention and bets. Oftentimes, it doesn't even matter if these teams are good or not; the general public just wants to bet on them. In the case of this bet, the United States is very much a public team.

“As we predominately serve a U.S. customer base, it only made sense to put America at the top of the list," Burns explains. "And let's not sugarcoat the fact that Americans are the loudest, boldest, and brashest people on the planet, so it makes sense aliens would want to eradicate them first." Harsh but fair.

The third-most likely destination for aliens to strike, per the odds set by BetOnline, is Russia with +1200 odds. "See U.S. reasoning," Burns says of Russia's odds.

While it would make sense for alien aggressors to set their sights on a military superpower and a nation that has been to space before, the country that BetOnline has given the second most-likely odds to get hit first a pretty strange one. Greenland, a massive island with a population of about 50,000 and no real military to speak of, has BetOnline's second-best odds of getting hit first, at +1100. "Greenland is a strange second on the list," Burns admits. "But going with the alternative theory that aliens may want to hit an easy target initially is how we landed there."

BetOnline's odds for who gets hit first does leave plenty of questions. What if the first strike happens in a disputed territory? Does BetOnline really want to wade into making calls on geopolitical conflicts? Probably not. But then again, if the world is getting attacked by aliens, the odds are the sportsbook is not going to be worried about fulfilling these bets seeing as impending doom is probably just around the corner.

Then again, should war break out between humanity and alien invaders, BetOnline has odds on that, too — and it currently favors the humans. The line is set at -150 for a human victory, an implied probability of 60%. For the sake of humanity, let's hope BetOnline has some good data to back up that one.

More like this
Jeff Bezos is going to space, which is the most divorced guy thing imaginable
By AJ Dellinger
Ring of fire solar eclipse: Here's how to watch
By AJ Dellinger
NASA announces new missions to Venus, our fiery sister planet
By AJ Dellinger
Stay up to date