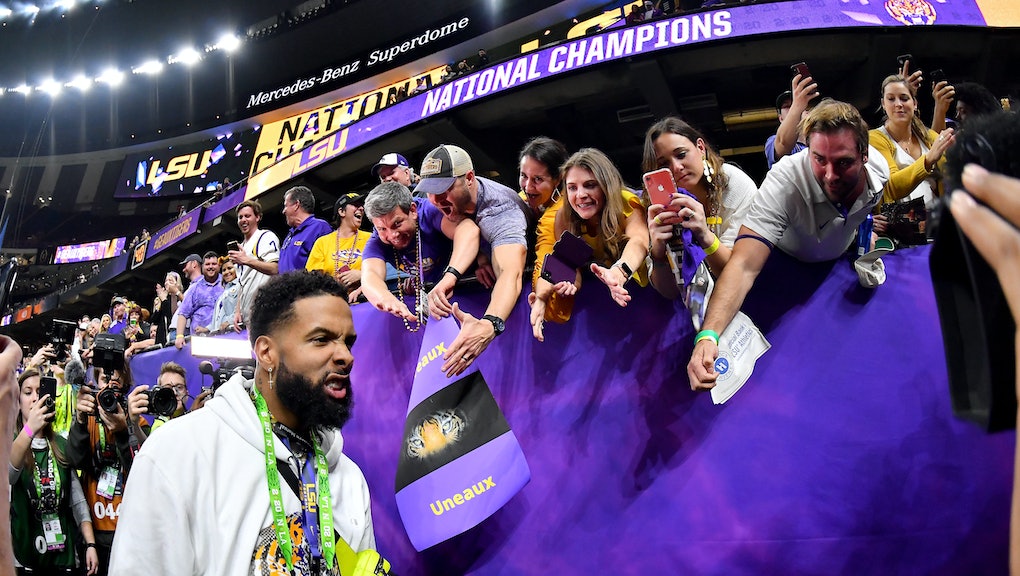 Louisiana authorities issued an arrest warrant for pro football player Odell Beckham Jr. on Thursday, after a video surfaced in which it appears he slapped a police officer’s backside.

The star wide receiver for the Cleveland Browns was in the locker room at Louisiana State, his alma mater, on Monday night — right after the team won college football’s national title game, beating Clemson. The video posted by TMZ shows a police officer sternly addressing an LSU player, who’s seemingly celebrating his victory. Beckham then comes up behind the officer and appears to slap his backside. The cop was, er, not pleased.

Beckham faces a charge of simple battery. A New Orleans police official told The New York Times she had no further details about the warrant and a copy hasn’t been made available by the courts. It is unclear what the officers were doing in the locker room in the first place.

The football player was already in hot water over his actions at the LSU game on Monday. After the team won the championship, Beckham was caught on video handing out cash to several college players, stirring up controversy.

The incident could violate NCAA rules, which stipulate that college players aren’t allowed to accept cash or other compensation. But universities have also been criticized in recent years for paying coaches multi-million dollar salaries and profiting off the free labor of students. California recently enacted legislation that will allow college athletes to make money from endorsements for the first time, notably.

More like this
How many times must victims relive their trauma in the Larry Nassar case?
By Chloe Stillwell
The first frustrating roadblock in Marilyn Manson’s sexual assault lawsuit is here
By Chloe Stillwell
Colin Kaepernick's new Netflix documentary highlights the man behind the icon
By Keith Nelson Jr.
Stay up to date