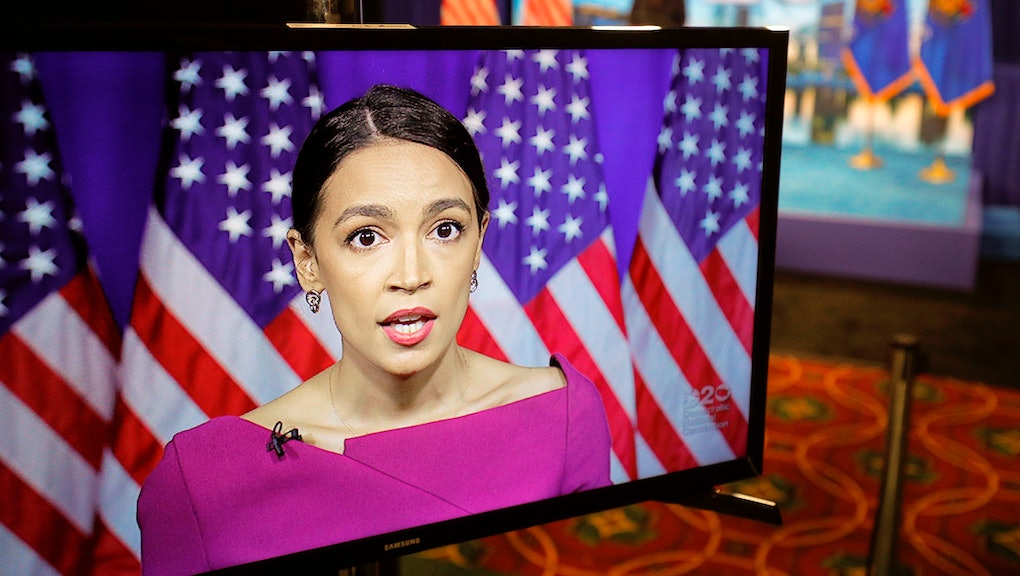 Of course AOC's DNC speech is being wildly misinterpreted by pundits

Dr. Jill Biden may have been the one delivering the keynote Democratic National Convention speech on Tuesday evening, but it was New York Rep. Alexandria Ocasio-Cortez whose DNC remarks were perhaps the most anticipated — and most talked about — moment of the night.

The speech itself, clocking in at just over 90 seconds, was hardly Ocasio-Cortez at her rhetorical height. Instead, it was a largely low-key summation of the progressive goals and aspirations that have in many cases been watered down or rejected outright by the Democratic Party at large.

Peppering her remarks with Spanish phrases and dedicating her speech "in fidelity and gratitude to a mass people's movement working to establish 21st-century social, economic, and human rights, including guaranteed health care, higher education, living wages, and labor rights for all people in the United States," Ocasio-Cortez ended her brief moment in the DNC spotlight by announcing: "I hereby second the nomination of Sen. Bernard Sanders of Vermont for president of the United States of America."

As she later explained, the nomination of Sanders was a required procedural step for a political convention which, beneath the bizarre trappings of Zoom speeches and fever dream musical performances, is fundamentally a nuts-and-bolts process for ratifying the party's presidential nominee. Sanders during the primary had amassed enough delegates to qualify for nomination, even though he fell well short of former Vice President Joe Biden's nomination-clinching total.

Still, multiple news outlets and pundits leapt on her remarks, mischaracterizing them to seemingly imply that she had willfully rejected Biden's nomination in an effort to sow discord at the convention.

"So ... how are you going to fix the incredible amount of damage and misinformation that you are now responsible for?" Ocasio-Cortez tweeted early Wednesday morning, calling NBC News's framing of her speech — which the network later corrected — "unacceptable, disappointing, and appalling."

"It sparked an enormous amount of hatred and vitriol, and now the misinfo you created is circulating on other networks," She continued. "All to generate hate-clicks from a pre-recorded, routine procedural motion." The New York Times's tweet sharing Ocasio-Cortez's speech was similarly misleading.

But willful, or genuine, ignorance over the purpose of Ocasio-Cortez's speech aside, there was an even worse reaction to her remarks from New York's Jonathan Chait.

Chait essentially argues that phrases like "human rights" and "racial injustice" are simply too highfalutin and complicated for anyone who didn't go to an "elite" university. And before you say "no no, that can't be what he meant?" allow me to show you that yes, that's exactly what he seems to believe:

That Chait is somehow more in touch with what is, and isn't, intended for "people who attended non-selective universities" (to say nothing of people who didn't attend college at all) is made all the more laughable when you remember that he's been comfortably ensconced in the uppermost echelons of the pundit industry for decades now, while Ocasio-Cortez was working as a New York City bartender until two years ago.

Fortunately, Chait's pompous elitism didn't go unnoticed by his target, who remains undefeated when it comes to Twitter trolls.

Still, if Ocasio-Cortez's brief speech did anything, it served to highlight just how raw and unresolved the gulf between the moderate and progressive wings of the Democratic party truly is — and showed that she, herself, will continue to be a major force within the party and beyond.