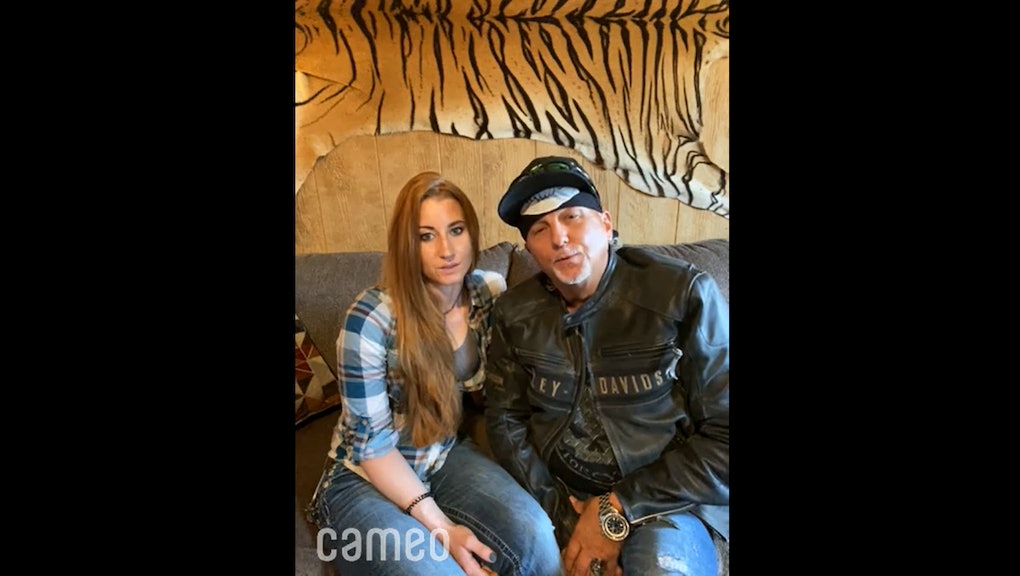 On Wednesday, a confounding clip of Tiger King’s Jeff and Lauren Lowe went viral on Twitter. Jeff was forecasting the collapse of global capitalism, communism rising from its ashes, as the billionaires crumble in defeat and workers unite. “Stay strong, watch season 2. We won’t be there,” he said. Alright.

Although the second tidbit might prove to be more newsworthy than the first, rest assured that none of it was an elaborate April Fool’s prank. The Lowes, like a few other players from Netflix’s sensational docuseries, are now on Cameo. The popular shoutout website where you can pay minor celebrities to say just about anything within the realm of dignity had already been getting more dystopian amid the pandemic, but this takes it a step further into the uncanny.

In a sense, the cast of Tiger King was made for this sort of thing, with their grift and chameleonic commitment to fame knowing no limits. This is a series predicated on a million different houses of cards buckling under the weight of manipulation. It’s no spoiler to say that the show’s center of gravity, Joe Exotic, is not on the app right now, and currently serving a 22-year sentence for hatching a plot to murder Carole Baskin.

Unlike the college cheerleaders of Cheer who joined Cameo soon after the series took off in January, I feel less protective concern toward many of these people extending their five minutes. Thus far, the Lowes, John Finlay, Kelci Saffery, and much of Doc Antle's family — who carry surprisingly high price tags ranging from $95-108 — are among the cast members on Cameo.

There’s no minimum screen time requirement for showing up on the app, with jet ski aficionado James Garretson charging $50 per clip. The former strip club owner and big cat enthusiast who later becomes an FBI informant graces the show’s final episode with a nearly 30 second slow-motion clip of jet ski footage. And then there’s Joshua Dial, the Walmart manager-turned campaign manager for Exotic’s failed gubernatorial race, who considers social distancing a “national service” in one clip. Although they’re lower on the list of the show’s most nefarious participants, it’s still at least a bit troubling to see everyone leveled off to function as harmless hired entertainment.

In many of their clips, which currently carry the price tag of $95, Jeff and Lauren either sit on their outside deck or on the couch in front of a tiger skin hanging on the wall. Whether they’re assuaging the recipient’s coronavirus fears or encouraging residents of Elkhart, Indiana to support local restaurants, almost every video ends on some variation of the conspiracy theory that Baskin killed her husband. “If you watch season 2, we’ll tell you where the body is,” Jeff says.

Directors Eric Goode and Rebecca Chaiklin have been hinting at more Tiger King, telling Entertainment Weekly that they still have a lot to work with, since most everyone on the show couldn’t stop filming themselves. “We have a crazy amount of footage and it's a story that's still unfolding. We're not sure yet, but there could be a follow-up on this story,” Chaiklin said.

More like this
The NFT gold rush, explained by the world's first meme manager
By Kara Weisenstein
How “stoopers” turned New York City sidewalks into trendy, sustainable thrift shops
By Jasmine Vojdani
Feds bust Capitol rioter after a grandma gossip chain identifies him as a January 6 insurrectionist
By Rafi Schwartz
Stay up to date