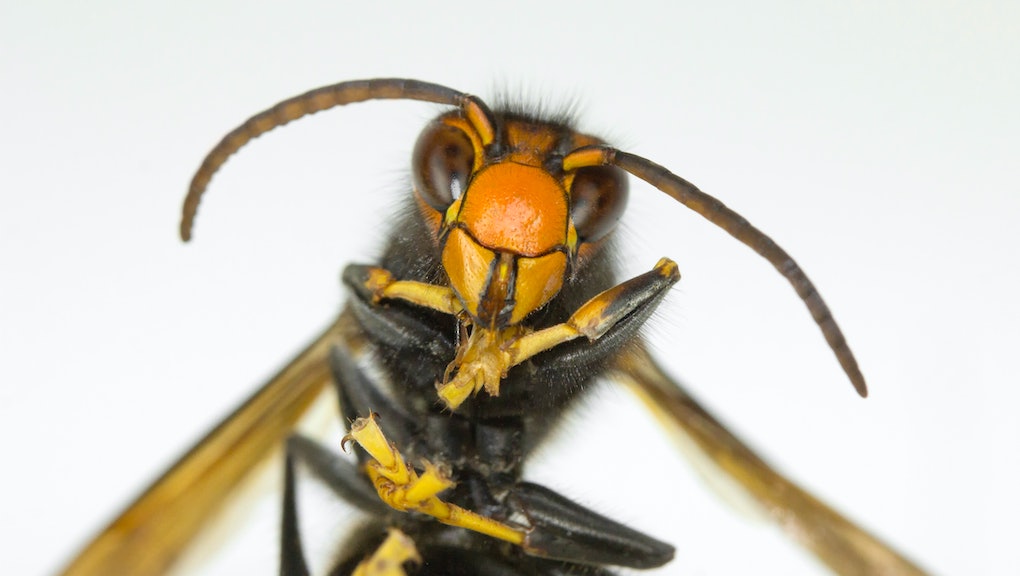 The desperate hunt is on to find a colony of murder hornets in Washington State before the insects enter what's ominously called their 'slaughter phase' — a stage where they earn their names by invading beehives and decapitating all of the adult bees before stealing their larvae for food. Officials with the Washington State Department of Agriculture (WSDA) are trying out all sorts of strategies to find the hornets' nest, but have yet to locate the headquarters of the mass murdering, baby stealing bugs. If the hive isn't located in time, the hornets could end up harming the state's blueberry and raspberry farms, which rely heavily on honeybees as precious pollinators.

Formally known as Asian giant hornets, these invasive bee-killers are more commonly found in rural Japan, where their intensely strong stings have killed about 30-50 people per year primarily due to existing bee allergies. Their large sizes and ability to repeatedly sting means they can needle a target with 10 times more venom than a honeybee.

In contrast, a honeybee may have more toxic venom, but can only sting once in self-defense before dying. The large amount of venom in a giant hornet is particularly bad news for folks with allergies to bee stings, but experts have noted that they typically won't sting unless bothered. Still, vulnerable folks need to take caution.

"The stinger of the Asian giant hornet is longer than that of a honey bee and is more dangerous than any local bee or wasp," warned the WSDA on its website. "Typical beekeeping protective clothing is not sufficient to protect you from stings. [...] Anyone who is allergic to bee or wasp stings should never approach an Asian giant hornet."

Entomologists and biologists with the state have mobilized to set up hornet traps to capture and glue little trackers on live insects so they can lead researchers to the colony. Their first attempt didn't go so well, as the hornet didn't sit still long enough for the glue to dry. The tracker ended up falling off and the glue stuck to the hornet's wings, making it unable to fly.

Despite the setback, officials are confident they'll be able to locate the hornet's nest soon. They've been practicing new ways to put trackers on hornets with greater success, and there have been at least five sightings of murder hornets in a single area within a week. Scientists are optimistic that they're getting close to a giant hornet extermination day.

The WSDA has asked the public to resist the immediate urge to kill any sighted hornets. Instead, they would like people to photograph and report any sightings using the department's murder hornet hotline, online form, or email.

"It is extremely important that [the public] contact us immediately," WSDA entomologist Sven Spichiger said in an online news conference. "Make note of what direction the hornets are flying off in so that we can locate the nest and destroy it."

More like this
Chicago is releasing feral cats to deal with its rat problem
By AJ Dellinger
Worm composting: A beginner's guide
By AJ Dellinger
The ethics of solar power are more complicated than you think
By Vanessa Taylor
Stay up to date