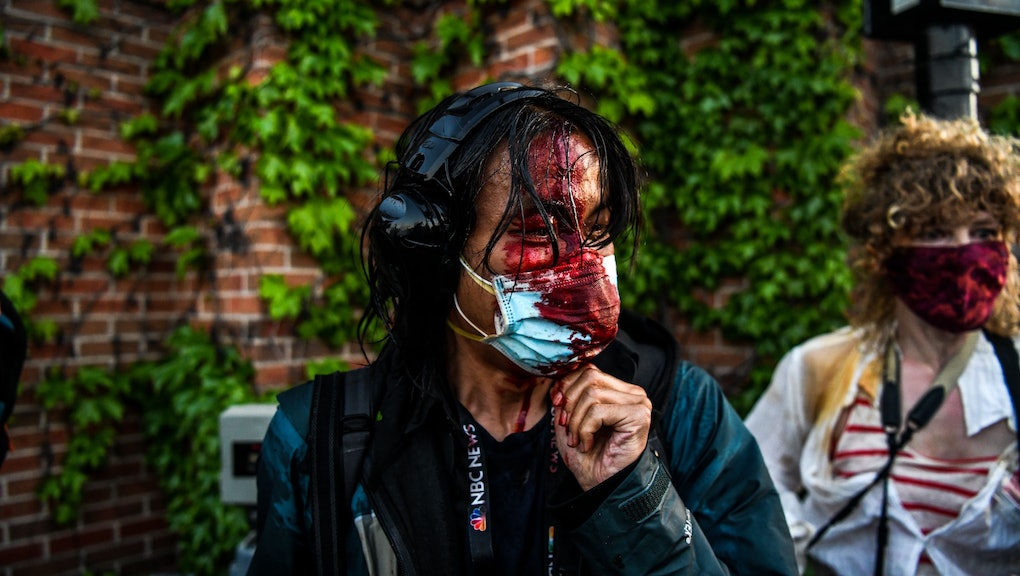 Of course the police are lying about brutalizing protesters

There's a good chance you've already seen the footage: 75-year-old Martin Gugino approaches an incoming phalanx of armor-clad riot police in Buffalo, New York, only to be violently shoved backwards. His head hits the pavement, and he lays eerily still, blood pooling underneath him while the rest of the officers march forward, seemingly unbothered by the fact that someone is literally bleeding out in front of them.

You can watch the video if you want. Be warned: It's awful.

Similarly awful is the Buffalo Police Department's attempts to dismiss their clear assault on Gugino, saying in their initial report of the incident that he simply "tripped and fell backward."

According to Buffalo Mayor Byron Brown (D), Gugino is in "serious but stable" condition at a local hospital, two of the (many, many) officers seen on film of the incident have been suspended, and there is "an immediate investigation into the matter."

The footage of Gugino is particularly sickening because of its bluntness: A man is literally bleeding out of his ears as lines of police step over him. When one officer does attempt to approach Gugino and help, he is stopped by another officer and shooed away.

But this blog isn't about Gugino — at least not exclusively. Instead, I propose that this whole revolting incident illustrates three equally alarming truths about what we're seeing happen across the country:

1) Police, as part of their ongoing riots against protesters, seem emboldened to commit acts of overt and indiscriminate acts violence against anyone they want.

2) Police, as well as other figures of authority, seemingly have no compunction about brazenly lying about their actions, even as their violence is documented in real time by journalists — both professional and citizen alike.

3) Our system of criminal justice and policing is so irredeemably corrupt that the only way to even hope for officers to be held accountable for their actions is to make sure the footage crosses some nebulous viral threshold on Twitter.

Consider Justin Howell, a 20-year-old protester whose family claims has brain damage, after police in Austin, Texas, shot him in the head with a bean bag round. Footage of street medics carrying his limp body amidst a hail of "less than lethal" police munitions has been shared thousands of times. Austin Police Chief Brian Manley apologized to Howell's family — an apology Howell's older brother Jason has roundly rejected. Ask yourself whether you think the police would have been as contrite about Howell's condition, and their actions that put him in the hospital in the first place, had video of his rescue not gone viral.

Here's another one: Chicago police have reportedly begun investigating officer who was filmed chasing down, and then roundhouse punching a seated protester in the face. As Chicago's Fox 32 noted: "The Chicago Police Department has opened an internal investigation after video surfaced online." (Emphasis mine.) Or how about when Minneapolis police arrested CNN correspondent Omar Jimenez, who clearly identified himself as a journalist to authorities and was wearing a visible press badge, during a live broadcast, then released a statement about the arrest that completely contracted publicly visible evidence.

In two particularly egregious examples from just the past 24 hours, here's both New York Gov. Andrew Cuomo (D) and New York City Mayor Bill de Blasio (D) going out of their way to cover for the New York Police Department, despite mountains of video and firsthand evidence documenting violence against peaceful, non-threatening protesters by police and overtly illegal detentions of people who have express permission, from these same officials, to violate the city's curfew.

The list goes on and on and on. A personal favorite of mine is footage of a police officer giving a group of armed Proud Boys a warning before he goes on to deploy tear gas against a group of protesters, and then saying he didn't want the public to see he was "playing favorites." Time and again we've seen police, or whatever federal or military agency is buttressing local law enforcement these days, go after clearly identified members of the press, seemingly at random — but with the overarching effect of removing the very mechanisms that can disprove the obvious lies and obfuscations they keep foisting on the public.

Which brings me back to Martin Gugino. It is an unfortunate truth that what took place in Buffalo could very well serve to galvanize public opinion against the police in a way the countless other examples of lethal violence against people of color might not. As a friend of mine dourly noted on Twitter, footage of armored cops shoving an elderly white man and then casually stepping over his bleeding body is the sort of thing that "is 'lead story on the Today show' territory."

If that is indeed the case, it's a sad indictment of where we are — and how much further we still have to go when it comes to understanding the degree to which the police, as an institution, stands committed to protecting and serving itself above all else.

More like this
What Madison Cawthorn packs for his flight: Heat
By Rafi Schwartz
Adam Kinzinger basically just outed his fellow Republicans as a bunch of cowardly phonies
By Rafi Schwartz
The DOJ hangs Rep. Mo Brooks out to dry for allegedly inciting the January 6 insurrection
By Rafi Schwartz
Stay up to date