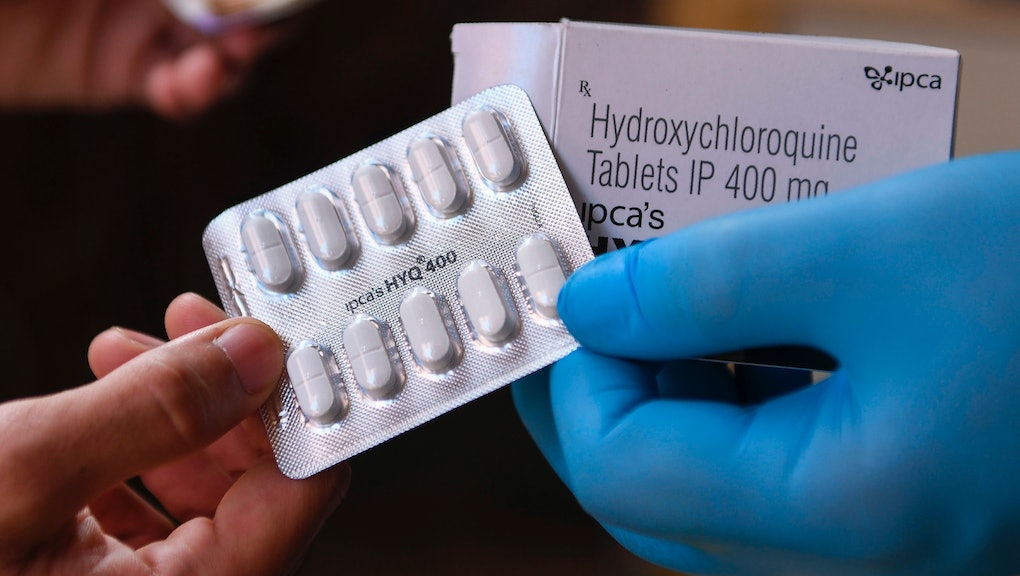 Oklahoma bought lots of hydroxychloroquine — and has regrets

Now that Donald Trump is no longer president of the United States, here's a complicated jumble of consonants and vowels I bet most of you thought you'd never need to think about ever again: hydroxychloroquine.

The former president's favorite quack cure for the coronavirus still rampaging across the country is back in the news, after Oklahoma Attorney General Mike Hunter's office confirmed this week that he was attempting to negotiate a way to return the more than $2 million worth of hydroxychloroquine tablets the state purchased from a private supplier in the early days of Trump-fed hydroxychloroquine mania. That's around 1.2 million pills in total the state is trying to unload.

"When we were battling sort of the fog of war at that point, we certainly acquired it on the potential that it would have utility," Oklahoma Health Secretary Jerome Loughridge explained in April, after questions arose about the state's massive purchase for a drug more commonly used to treat malaria. Trump had latched onto hydroxychloroquine as a miracle COVID-19 cure, despite little scientific evidence to back up his claims.

In a statement to The Frontier, which first reported on Oklahoma's effort to offload the costly and ultimately ineffective COVID treatment, a spokesperson for Oklahoma Gov. Kevin Stitt (R) defended the purchase, telling the outlet, "Every decision the governor makes is with the health and lives of Oklahomans in mind, including purchasing hydroxychloroquine, securing PPE, and now distributing vaccines as quickly and efficiently as possible to combat this COVID crisis."

But Stitt's decision to purchase the hydroxychloroquine in April — long after the drug was already being tagged by doctors as having questionable utility as a coronavirus treatment — was particularly noteworthy, given that his state was just one of two which spent money to obtain what nearly two dozen other states were receiving for free from federal stockpiles and private company donations.

"Two million dollars is a lot of money to waste," Oklahoma state Democratic Rep. Melissa Provenzano told the Associated Press shortly after the governor's purchase. "Especially when we have unemployment claims approved yet going unpaid, health care professionals without proper protective equipment, and diagnosed cases and deaths continuing to rise."

Incredibly, the effort to unload the multi-million dollar stockpile has been going on for months. Shortly after the FDA officially pulled its conditional support of hydroxychloroquine as a potential COVID cure in July, the state reportedly looked into selling its massive stockpile. But medical consultant Clay Bullard — whom local CBS affiliate News 9 identified as having helped engineer the initial purchase — cautioned against getting rid of the cache, telling the station, "It would be my advice to hold on to it for a little bit longer" because any sale at this point would net pennies on the dollar, and further testing might prove the drug was effective after all. (It didn't.)

So now that actual COVID-19 vaccines are starting to slowly roll out across the country, Oklahoma seems ready to once again try and negotiate with the private wholesaler it purchased the initial stockpile from in the hopes of getting some or all of its money back.

Meanwhile, people who actually needed the drug to treat the conditions for which it has been proven successful, like lupus and arthritis, spent much of the early stages of the pandemic scrambling to get their hands on what had suddenly — and ultimately pointlessly — become next to impossible to get.

More like this
West Virginia is bribing young people to get vaccinated with cold hard cash
By Vanessa Taylor
FEMA said it would reimburse cities for housing homeless people. Most cities ignored the offer
By AJ Dellinger
Tucker Carlson wants his viewers to sic the police on kids wearing masks
By AJ Dellinger
Stay up to date