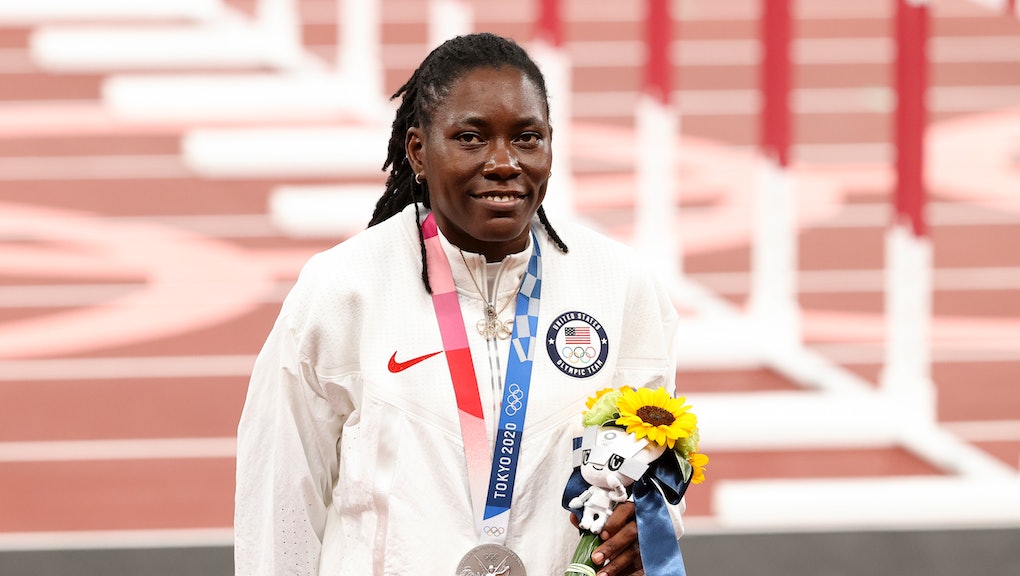 Olympic medalist Brittney Reese on shattering records, building a legacy, and cashing in

How much does history cost?

Legendary American long jumper Brittney Reese became only the third woman in Olympics history to win three medals in the long jump after she hurled herself into a silver medal finish at this year's Olympic Games in Tokyo. To do so, she had to compete in the first Olympic Games during a global pandemic of COVID-19's magnitude in more than a century, train in garages and parks instead of world class Olympic facilities, and be separated from a family disallowed from joining the stands to cheer her on. To make history in what she is calling her final Olympics appearance of her illustrious career, it cost her any normalcy she could find in the pandemic.

But, for Reese, it was worth it.

"Our sport is so unforgiving, one little mistake can cost you your career, money and stuff like that. For me to have that longevity and be on that type of level to achieve such a great goal is amazing," Reese told Mic.

As a professional long jumper since 2008, the 34-year-old has won 11 total medals in international competition and has surmounted dozens of competitors, but never encountered an adversary as overwhelming as COVID-19. No bedroom TVs, strict eating protocols, and a pre-Olympics training schedule of garage and park workouts instead of world class Olympic training centers are a few of the new realities Reese had to adapt to. Without the crowd, she found her energy from the high level of competition around her and music by Kevin Gates and Nicki Minaj pulsating in her ears. Without her family in the crowd, she stayed in touch through FaceTime and spent long nights playing Call of Duty Mobile with her her 13-year-old son. Now, she's calling it quits on Olympic events to watch that same son grow in his respective sports — but not before she tells the world why she deserves more respect.

"When you’re in our field and see how much attention and money other athletes that are under you [receive] who haven’t achieved a medal at all, it shows how flawed our sport is," Reese laments. "It’s hard to be respected if you’re on the Field part of Track & Field. They say it’s because the track people are on TV more so it’s easier for them to be more liked and endorsed."

Mic spoke with Reese less than a week after her historic win to get a look inside what the Olympics were like for athletes during the pandemic, how much money she made from winning a silver medal at the Olympics, and her view on her legacy.

You’ve been to four Olympic Games, but this is the first one you’ve participated in during a global pandemic. Compared to your other three appearances, how was this year’s Olympics different for you?

It was different when you see everyone walking around with masks. Everywhere you go it was plastic plates, forks and things like that. You couldn’t serve yourself. Usually we have McDonald’s, we didn’t have any McDonald’s this time. It was really different. We didn’t have any TV. We were just in a room. They had shops for us to go to, but you had to eat with a little plexiglass in front of you.

As an athlete, you feed off the crowd and this year’s Olympics had severely reduced the crowds. How did you adjust to not having a big crowd?

It was different. You had to conjure up your own energy. There were some people there, but it wasn’t a lot of people there. You get the claps from those who were there to clap for you because a lot of the other countries didn’t want to clap for America, they were there to clap for their country. You had to get your energy from yourself. Even without the crowd, it was still one of the most historic long jump events in my career.

This was a unique Olympic experience happening during the pandemic. How did the postponement of the 2020 Olympic Games to 2021 affect your training?

It affected it a lot because I’m blessed to train at the Olympic training center. During the pandemic, they shut down the entire center. So, we couldn’t train or get anything done. I had to improvise by turning my garage into a gym. My coach turned his garage into a gym. We went to local parks and trained. We did the best we could. Fortunately, we didn’t have to do any meets, so we just trained that way for the summer, shut it down in September and started back up in November. We were able to get back on the track in 2021, but it was basically doing it at the park over the summer.

What did you do to get into the mindset needed to compete at an Olympic caliber?

I went through my same routine and listened to music while I warmed up. Nothing much changed. I get my energy from the competition. So, how good people are jumping is how I perform, especially if it’s really really good competition with really really good jumps as we saw last week. For a veteran like me, it wasn’t too hard to get the energy I needed.

You’ve said you believe your legacy deserves more respect. Why do you feel that way?

When you’re in our field and see how much attention and money other athletes that are under you [receive] who haven’t achieved a medal at all, it shows how flawed our sport is. It’s hard to be respected if you’re on the Field part of Track & Field. They say it’s because the track people are on TV more so it’s easier for them to be more liked and endorsed. It’s tough. I don’t do this sport to be recognized but I would love to be appreciated. When we do Track & Field commercials, we need to start putting more athletes actually in the sport instead of using models. In our sport, they only take a couple of people to hype up.

When it comes to winning a medal in the Olympics, how does it affect you financially?

Getting a medal can help your career because you’ll get more endorsements. You get paid through your federation, so I’ll get paid through the U.S.A Federation. I can’t remember how much it was to win Gold. I think it was about $20,000-$30,000. I know the guy from Italy is going to get $200,000 because he won Gold. It varies by the country. The country picks how much they’re going to give the athletes who win.

How much did you make for winning silver at this year’s Olympics?

Can people sustain a livelihood as a long jumper?

Yeah, I think you can. You just have to be a top athlete. It’s hard for anybody if you’re not doing well, going overseas and jumping far. You can make money in this sport, but you just have to be winning or get in certain meets to make the money. It’s all up to how well the athlete is.

When did you decide this was going to be your final Olympics? Why?

I’m pushing 35 right now, and I have a 13-year-old son. I just want to be able to be around him, get to watch him do his sports and be in the stand for him like my mom was for me. I’ve been in the sport professionally since 2008. I’ve won medals and done everything I feel I can achieve at this point, so I think it’s a great way to go out.