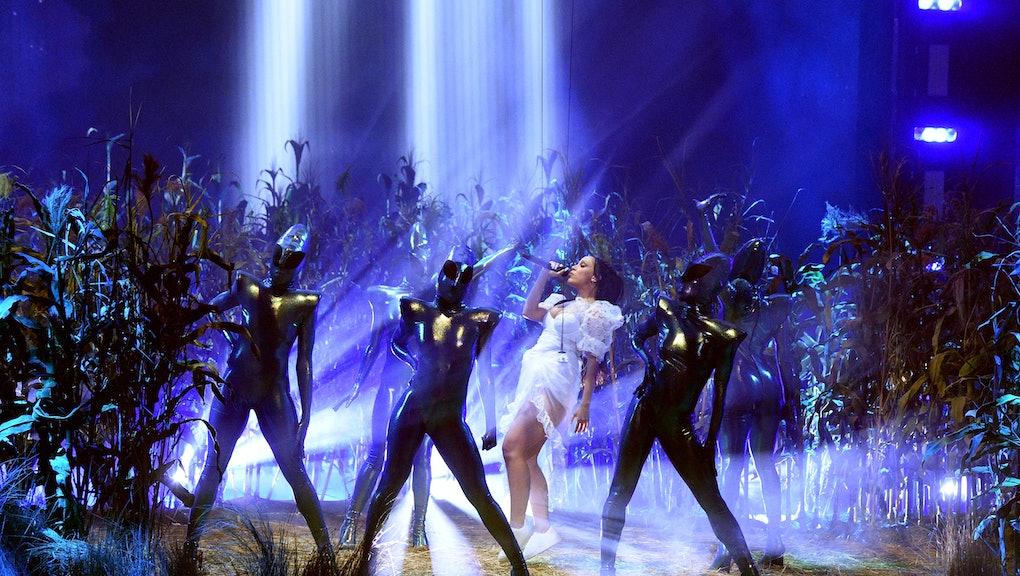 On 'Planet Her,' Doja Cat is fully realized as the future of pop

For those less tapped into the niche corners of the Internet, the presence of Doja Cat in 2020 may have appeared as the fantasy outcome of an industry plant: if you hadn’t encountered her rise via her more meme-ready, bovine-inspired work, she seemed to appear everywhere, especially online, all at once. Her 2019 album Hot Pink seemed to have practically every track blow up on TikTok in some way, particularly early on in the pandemic, and within a year Doja became a household name performing at the Grammys. The perfectly calibrated lead single, “Kiss Me More,” off of her new album Planet Her — the most refined showcase of her many talents thus far — has of course become a trend as well, and will likely precede more hits that will do the same.

That Doja’s stardom was built on TikTok, particularly during the stretch that the social media platform came into its own as what is now the single most effective force for virality, should come as no surprise. Doja is a star whose identity is embedded into the internet, from her gaming streams on Twitch to her own wickedly funny inside-joke-heavy TikToks to her dubious forays into chatrooms — her music is just one part of her persona, and arguably even the less important part of her allure for some of her fan base. But her appeal is less of a campaign calculated to manipulate the online apparatus — if Doja’s repeated controversies, along with her ability to shrug them off, are any indication, it’s rather her carefree intuition, her chaotic sensibilities (a.k.a. the language of the internet) that are the key to her success.

This is all to say that, with Planet Her, Doja Cat seems to be cementing her stardom as a natural, if improbable amalgamation of the future of pop, both sonically — relying on a dance and trap pop backbone, but also simultaneously veering into somewhat zanier territories — and also in its innate understanding of how commercial music operates and is consumed. This album crystallizes her effortless, playful energy into a delightfully shape-shifting work. Doja not only knows how to make herself and her songs surge on the internet, but she manages to execute a varied set of identity-swapping performances in a way that feels like a natural mark of her studied, eclectic talents rather than an exercise in chasing trends.

The clearest indication of this is how the best songs on the album are those in which she enlists her A-list features — songs where she is not just benefiting from the boost of another superstar, but instead tweaking the energy and voice of her persona to blend with her duet partner. This was apparent from her delicate hottie voice alongside SZA on “Kiss Me More,” but it’s even truer when she keeps up the elastic experimentation of Young Thug on “Payday,” or in her at times airy vocals with Ariana Grande on “I Don’t Do Drugs.”

Nicki Minaj is not featured here, but she might as well be — Doja puts on her best impression of the rapper’s manic inflections on “Get Into It (Yuh)” and shouts Minaj out at the end. The deluxe version of Planet Her also features a song with Eve that feels like it is sampled straight out of the rapper’s discography, and her track with The Weeknd is good enough that its extended version, also on the deluxe, doesn’t tire for a moment.

Hot Pink already gave an indication of Doja’s varied sonic ideas — from the dance pop disco vibes of “Say So,” to the moody alt-R&B of “Streets,” to the pop punk of “Bottom Bitch.” But Planet Her feels like a more controlled version of Doja’s abilities, even if there are other more moments that swing into other arenas with more mixed results, such as the dancehall opener, “Woman,” or the Soundcloud-era, autotuned ad-libbed melodies of “Imagine.”

The album presents a fuller portrait of just how varied Doja’s range is. She can be so slickly carefree and chaotic in her persona that our shifting attentions can obscure the fact that she is supremely talented at seemingly everything she does. Her creative direction has been purposeful and often electrifying; her flows can be at once controlled and delightfully unpredictable (even if they are imitative); and her dancing and singing ability is that of a bonafide pop superstar.

In this sense, there is also a distant hope that Doja might eventually cohere her powers into something more thematically consistent and cohesive on a record. But then again, that thought is quickly bowled over by the very notion of Doja Cat’s appeal in the first place. The album’s title and its opening track “Woman” are perhaps the closest indication of a “statement,” as Doja doesn’t necessarily say anything overtly about the idea of womanhood on the record. And that’s for the better — what is more satisfying and potent is Doja's own charm and the unbothered, girl’s girl energy she exudes. Even if we might be disoriented, we’re just happy to be in her universe, one that is as expansive and enticing as the online world that she seemed to have fallen out of, fully formed and ready to show us the way.