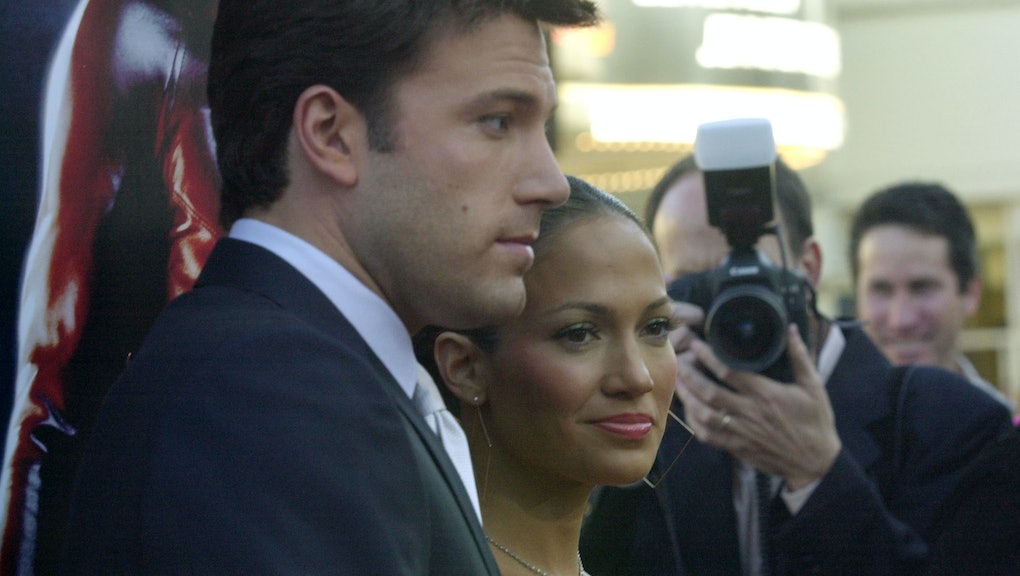 A new era of Bennifer is upon us. E!, the essential source on all things Bennifer, obviously, has confirmed that Jennfier Lopez is moving to Los Angeles for a “fresh start” with Ben Affleck. Lopez and Affleck have been, for lack of a better word, canoodling ever since the end of Lopez’s engagement to Alex Rodriguez (who is, presumably, listening to Coldplay’s Fix You right now) back in April. The engagement was reportedly ended by Lopez. The union of these possibly star-crossed lovers, which started with emails from Affleck back in February, seemed casual and light at first. Now it’s serious: Lopez is relocating to LA from Miami for this man, which you don’t do if you’re just doing this because you’re on the rebound from a four year relationship with A-Rod. This new era of the Bennifer dynasty has signified an evolution in celebrity coverage far removed from the bitter, toxic, and misogynistic culture that clouded the early 2000s when American royalty Jennifer Lopez and Ben Affleck originally dated.

The original Bennifer was hot as a girl summer back when they were first together from 2002-2004. Bennifer was the closest thing we ever had to American royalty. They were all over tabloids, magazines, MTV and even primetime television. Some of my most vivid childhood memories are from the summer of 2003, when I would rush home to catch the latest Bennifer special on Entertainment Tonight or Access Hollywood. But even within relentless, seemingly positive coverage was an underlying skepticism. Miraculously, most of the pessimism from the press and the public was directed toward Lopez instead of Affleck. People wondered if Lopez was too eager to fall in love, if they were moving too fast, if they were just doing this to be more famous. When they got engaged, Lopez and Affleck were constantly pushed by the press to give them details about their wedding, including a date and a venue. At one point in Diane Sawyer’s sit down with Lopez on Primetime Live in 2002, Sawyer jokes that the interview feels like a deposition. It did. Sawyer’s interrogation is a prime example of what the media got wrong about Lopez and Affleck’s relationship. What started out as a sincere curiosity about two of the most famous people on the planet falling in love turned into resentment, resulting in intrusive questions, baseless peculations and non-stop paparazzi, which led to the relationship’s demise.

2021 Bennifer signifies a major shift in culture and celebrity coverage from the appalling, misogynist one of the early 2000s: the media that stalked young women like Britney Spears and Lindsay Lohan, and shamed them for their every move, for being young women who dare to grow up and have flaws. Angelina Jolie was similarly vilified in the press — and is still vilified now — for ruining Jennifer Aniston’s relationship with Brad Pitt, when Pitt ended his marriage with Anniston in favor of Jolie in 2005. Pitt was criticized too, but not nearly as much as Jolie, who was labeled a homewrecker and still battles these sexist labels over 15 years later. Ben Affleck and Jennifer Lopez were constantly covered by the media in a way that derailed their relationship, and in a way Affleck and Lopez have not forgotten. On The Hollywood Reporter’s Awards Chatter podcast in 2021, Affleck said “at first it was an infatuation, what an interesting couple. And then there was a ton of resentment — ton of resentment against me, a ton of resentment against Jennifer.” He also called the resentment toward Lopez “sexist, racist, (and) ugly.”

The reaction to Bennifer’s recoupling is optimistic and overwhelmingly positive with calls for Bennfier to do Gigli 2 (this should not happen, please no) and for them to pursue a healthy, happy relationship, whether it lasts or not. I am one of the many thousands of people who hope for this to work out long-term: after pouring through old interviews, it’s very obvious that these two were genuinely in love but were torn apart by overexposure in the press and constant pressure to make big decisions about their relationship to satisfy everyone but themselves. Perhaps this positivity is a result of the most depressing year of our lives, where any story that involves people finding happiness — even if it is very rich and very beautiful people — helps. Or perhaps it’s nostalgia. But more likely, it’s that most people were always rooting for Bennifer: the media just fed us a narrative rooted in negativity, thinking it was a thriving formula since it was the only thing they ever gave us.

There is still a long way to go from here. Just because the coverage and response to Bennifer is positive and free of any glaring misogyny does not mean it’s not out there. But the optimism surrounding the new era of Bennifer is, hopefully, a sign that the era of media and culture made for and controlled by middle aged, narrow minded white men is over.

More like this
Alanis Morissette is really not happy with the 'Jagged' documentary
By Kara Weisenstein
The unmatched power of Michael K. Williams
By Bonsu Thompson
Mariah Carey's 'Glitter' era deserved better
By Treye Green
Stay up to date