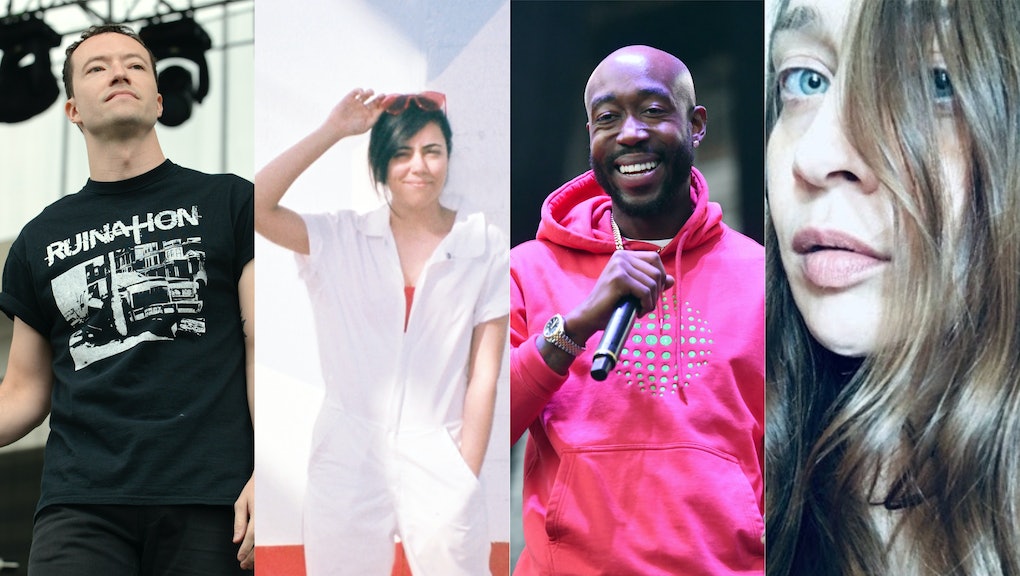 Our favorite albums of 2020, including Fiona Apple, Freddie Gibbs, and more

It’s been easy to either overstate or understate music’s importance in a year filled with so much loss and brutality. However banal, it could go down as a “balm” and “vital quarantine companion,” or something that felt impossible to approach in the same way as before. There’s only so much music can assuage, but it was available and consistent and thrilling during the most trying cultural moment in a generation. When the live music industry first screeched to a standstill, it certainly looked like new releases might go the same route — with artists delaying their records until an unreachable point when touring might resume.

Nine months later, and we’re more or less in the same place. Career touring artists have shapeshifted into content creators, hinging their livelihoods on Patreon subscriptions and peak Lil Wayne-mixtape output. This, along with some records nearly a decade in the making, have made it an unusually strong year for new releases under dire circumstances. Here are my favorites. (Condolences to Taylor Swift’s Evermore and Kid Cudi’s Man on the Moon III — I think they’ll manage! — and any other record released after the point of consideration.)

Every Fiona Apple song begins from a place of unbridled possibility — where a voice’s uppermost register, a box full of dog bones, or loose kitchen supplies can unlock something revelatory. The Idler Wheel… pushed her further into this percussive, fearless arena, sharpening away at the edges of her vocal cords, while working field recordings of mechanical factory churn and schoolyard laughter into the songs. Her vivid excavations of heartbreak and spindly neuroses never provide much time to wallow, because she’d rather ferociously confront them head-on — blast it, bang it, bite it, bruise it, if you will. After another typically long gestation period, Fetch the Bolt Cutters arrived into a world that seemed to mirror her own. Self-reflective, claustrophobic, predisposed to think about an old grade school acquaintance who boosted you at a crucial moment. But Apple’s never prided herself on relatability or being anything close to reachable — which just draws you in closer. And so Bolt Cutters winds up a joyful, restless paean to the act of creating, and finding potential in anyone and anything — even if they caused you immeasurable pain — because it’s the only way forward.

The hardest part about losing someone will certainly be the first few days and weeks — until several months have passed, and then a year, and another. After emptying himself into Stage Four, one of the most profound and painfully interrogative albums about losing a parent, Touché Amoré frontman Jeremy Bolm throttles through the ambient lull that follows. Bolm says it himself on Lament — he’s never been too subtle. So there he is on “A Forecast,” confronting the friends and collaborators who made a quick buck on his grief but didn’t check in when he needed it most. The post-hardcore titans were never going to top Stage Four in lacerating lyrical intensity, so they’ve instead forged into more ambitious instrumental territory, with the help of nu-metal superproducer Ross Robinson. The result is an explosive and wildly uncompromising album, that finds Bolm wailing his lungs out off-mic on the supposed crossover single (“Limelight,”) the band testing out rippling pedal steel (“A Broadcast,”) and tripling down on the velocity (“Come Heroine.”) Maybe Bolm’s a little washed and drained out, but he thrillingly finds inspiration from the little flashes of love surrounding him.

3. Illuminati Hotties — Free I.H.: This Is Not The One You've Been Waiting For (Self-Released)

When the latest Illuminati Hotties project first appeared online — on a mysterious SoundCloud page and Twitter account attributed to Occult Classic — it willingly invited second guessing. Although the tracklist was dotted with keyboard shorthand and, well, the band said their name on a track to tip their hand, it still wasn’t clear how this could be the same artist that brought you Kiss Yr Frenemies. On the snarling Free I.H.: This Is Not The One You've Been Waiting For, Sarah Tudzin turns a now-infamous split from her label — Tiny Engines, accused of paying artists a pittance of what they were owed — into the approximation of several video game soundtracks colliding at once. Cycling through propulsive power pop, calypso rhythms, and more abrasive punk (“WATTBL,”) it makes you wonder why indie rock can’t always be this fun and a little mean. Tudzin runs the handbook through a paper shredder, effectively smashing the keyboard against her boss’s face before walking off the job one last time. They’re right — it isn’t the one you’ve been waiting for, because you never realized Illuminati Hotties had this in them to begin with.

She’s a prophetic one, that much is certain — singing of masks, sirens keeping you up at night, and Eric Clapton showing his ass despite sustained personal tragedy. Perhaps the only artist who was equipped to actually become a bigger star through all of this, Phoebe Bridgers’ Punisher got the rare benefit of a seasonal double-dip, emerging in the nascent days of summer and surging into the autumnal purgatory. No one was better suited for a year of touring to be replaced by posting, or the ambient pulse of national trauma. Punisher is at once more understated and lavish than anything she’s done before, with guitar and strings darting around these skeletal arrangements. The dam bursts wide open on “I Know the End,” a shrug toward apocalypse that can’t help but sound like a celebration.

There’s plenty of music writer kayfabe to go around — I think I wrote on the week of Melee’s release that it’s the best album for breaking stuff. (Full disclosure: I haven’t done this yet.) But to do anything else while Dogleg’s Melee plays in the background, whether it’s lifting or gaming or knitting, feels like a severe underestimation of its powers. How can you just sit there when something so active and unsparing in its pacing just keeps moving along? One of the greatest casualties of a year without relentless touring, Dogleg fully capture the appeal of a great live setlist that just doesn’t give you a moment to breathe, piling the live-wire guitars, jittery tempo-flips, and beer-splattering howls on every single song. The Michigan four-piece approach punk with action movie urgency, completely allergic to ballads or tackling the forces that relentlessly beat you down with anything less than backflipping gusto.

Just five years after its release, there’s no shortage of great rock records that place Hop Along’s Painted Shut on a mighty pedestal. The Los Angeles-based Cartalk is the latest to nail this, going a step further than Great Grandpa’s excellent Four of Arrows in naming their evangelism right on the first track of their debut. Screaming along to “Well Dressed” in the parking lot, then through the Arroyo Tunnels of Pass Like Pollen’s opener, Chuck Moore delivers on the Americana-tinged, highly dynamic indie rock of the aforementioned. Highlight “Las Manos” casts a nascent romance in Swiftian widescreen, letting the guitars slash through their indecision. Through its lean 33 minutes, Moore — teamed with crisp production work from Illuminati Hotties’ Sarah Tudzin, something of an indie rock MVP this year — renders these miniature sagas in astonishing lyrical detail.

Did he really have anything left to prove? After a stunning run of single-producer collaborations with Madlib and the Alchemist, Freddie Gibbs re-teamed with the latter on this year’s Alfredo — the kind of lavish victory lap for a guy who’s gradually squeezed his way into the rap establishment. Whether he’s offering a poignant refrain against unending racist policing, splitting apart mafioso tropes along old film samples, or Remembering Some Guys of early quarantine fascinations, Gibbs remains one of the most effortless stylists in the game. On “God Is Perfect,” Gibbs rides such irresistible double-timed verses into an exhausted squeak. They’re an overly reliable duo, ensuring that Alfredo goes down heavy like its namesake, but you never once doubt scooping up another round.

8. The Killers — Imploding the Mirage (Island)

“The Killers make their War on Drugs album” is a Rorschach test for the ages, and one I didn’t think I’d fall for...but here we are. I’ve always enjoyed the idea of artists more or less releasing a full-length tribute record, pairing with the same producer who unlocked another artist’s recent glories (in this case, Shawn Everett, who won accolades for A Deeper Understanding and Kacey Musgraves’ Golden Hour.) Brandon Flowers’ charisma has often needed the right glittery production sheen to back it up, and something about their songwriting here is both an improvement and the most quintessentially Killers — “imploding the mirage” runs with “are we human or are we dancer.” But there’s no way to hear the rip-roaring “My Own Soul’s Warning” or the Springsteenian drum breakdown and twinkling xylophone on “Dying Breed” and not feel ready to plow through a brick wall. Maybe they’ve made their Joshua Tree here — which is to say, an unimpeachable run of four career-best singles to kick off an album, followed by a half-dozen other winners.

Joseph D’Agostino doesn’t need to hear any more about his brutally unlucky streak, so I’ll stick with the short version: his previous band, Cymbals Eat Guitars, deserved the world, and his new project was cruelly robbed of a proper touring debut. His first album as Empty Country wonderfully offers more of the same — that’s to say, highly detailed narratives with crashing waves of noise. With heartland flourishes and slightly more laidback instrumentation, he dots the canvas with some harrowing tales. There’s the sociopathic character at the center of “Becca,” who intentionally blinds eclipse-watchers, and the frenzied purgatory, awaiting his wife’s biopsy results on “Ultrasound.” Empty Country functions as a fresh restart for a songwriter who seemed to be making all the right moves, but just needed to shake up the approach.

Okay, I know none of us probably miss the guy who’d pull an acoustic guitar out at the bonfire party — but you miss that party, right? The sort of spontaneity that can emerge from three friends swapping harmonies and reworking old classics into something you haven’t entirely heard before? This is obviously underselling what Bonny Light Horseman — the trio of Anaïs Mitchell, Josh Kaufman, and the Fruit Bats’ Eric D. Johnson — is up to here, but that kind of loose familiarity pervades. The songs featured on their self-titled debut are often upwards of 200 years old, but whether they’re holding a grudge with Napoleon Bonaparte or recalling biblical figures, these register as modern folk classics. Bonny Light Horseman felt like exactly the kind of resonant, low-stakes collaboration that would become all too common this year, but stands apart for its effortless camaraderie.