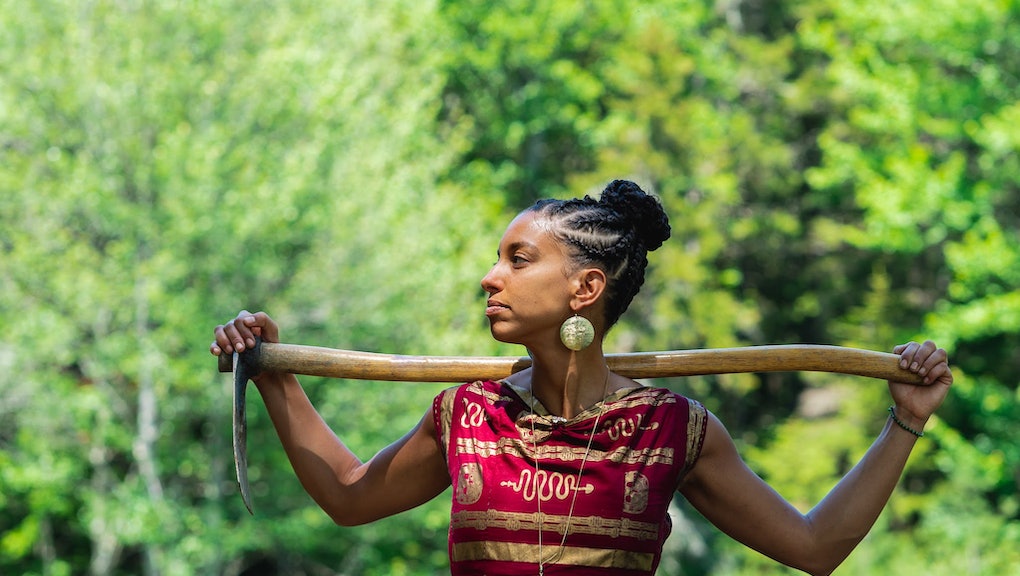 Our food system is broken and racist. Meet the farmers trying to change the way we eat

Chef Njathi Wa Kabui is passionate about good food. Growing up in Kenya, his mother’s subsistence farming provided for all of the family’s food needs, while his father ran a restaurant in the city nearby. Vegetables, sugar cane, bananas, guavas, and chickens were cultivated in their yard, and food and food cultures were celebrated.

But when Kabui, who is now based in North Carolina, moved to the United States at 20 years old, he found a radically different food culture supplied by a fractured, exploitative system. The bulk of the harms caused by this structure fell on Black, Brown, and Indigenous communities who had been removed from their lands — a critical resource for cultivating food, economic power, and independence.

“This food that we are eating has been colonized and enslaved,” Kabui tells Mic. “I say that physical slavery was gone, but the shackles were moved from the hand to the mouth.”

This belief is why Kabui and other food sovereignty farmers and workers are building alternatives to this system with anti-oppressive practices and decolonial ethics. In general, these solutions are a return to traditional modes of stewardship and sustenance practiced by Indigenous nations across the world for millennia. These tactics operate to satisfy not just nutritional needs, but economic and political ones, too. While the immediate focus is usually local, the ultimate goal is a global liberation of food supply systems.

“When we talk about creating a just and sustainable food system, we're really rooting ourselves in an international peasant movement called La Via Campesina, that lays out a detailed platform of what that food system looks like,” Leah Penniman, farm manager and co-director at Soul Fire Farms, tells Mic.

Giving someone a four-by-four plot doesn’t do much for their overall sovereignty. - Cheyenne Sundance

Cheyenne Sundance, a Toronto, Ontario farmer who operates an urban farm called Sundance Harvest, learned about cooperative farming and food oppression while working on a farm in Cuba. Sundance says that food sovereignty is about more than simply providing cheap greens or building municipal community gardens — the yield of which usually can’t be sold commercially. “Giving someone a four-by-four plot doesn’t do much for their overall sovereignty,” she tells Mic.

Food has always been a critical component of liberation struggles. The Black Panthers’ free breakfast program fed thousands of poor Black youth while governments let them starve. In 1969 activist and organizer Fannie Lou Hamer founded the Freedom Farm Cooperative, a 40-acre tract of land in Mississippi upon which Black farmers — restricted from purchasing land and owning their yields—could raise cash crops and food for their communities. Hamer told supporters, “The time has come now when we are going to have to get what we need ourselves.”

Hamer’s project recognized and addressed the socioeconomic and political impacts of the mass displacement of Black and Indigenous people in North America. Ali Anderson, founder of Los Angeles-based food justice project Feed Black Futures, notes that 500 years of structural, systemic, and interpersonal racism — including Black Codes, sharecropping, redlining, theft of Black-owned land, and the United States Department of Agriculture’s discrimination against Black farmers — has sustained these conditions. Food sovereignty, she says, is a check against them. “Tending to the soil and facilitating it in returning life-giving food, medicine, and economic power to you is justice,” says Anderson.

That’s why Sundance operates a free 12-week program called Growing In The Margins at her urban farm in a 2000-square foot North Toronto greenhouse. The program, which takes on 20 students per season, teaches practical, hands-on farming and food sovereignty skills to young Black folks in Toronto, like Ekow Stone and Adwoa Toku. Stone and Toku say that both the practical and theoretical components of the program were fulfilling. “Access to land to grow food, develop a space, and co-produce with nature in order to have sustenance, that’s something that comes directly in conflict with a racist capitalist system,” says Stone. “For marginalized people to take up space and take control of land, then produce food on that land, is something that would be a huge step toward liberation.”

Toku describes it as “open-source learning” and skill-sharing that reframed her perspective on land. “What does it look like when we don’t take a colonized view of how we use resources and food?” she says. Both Stone and Toku now work in Toronto’s urban agriculture scene.

The “colonized view” has been the dominant one in North American food systems since European colonization began. Indigenous activist and advocacy collective Seeding Sovereignty’s executive director Janet MacGillivray and communications/digital director Eryn Wise say that colonial borders, land parceling, and the coordinated decimation of traditional foods have alienated Black and Indigenous communities from their homelands and intergenerational practices.

In some cases, these communities’ knowledge has been colonized, too. Anderson notes that South Carolina’s rice economy was entirely dependent on farming knowledge of Indigenous communities who saw no economic return for their expertise. Adding insult to injury, nation-building holidays like Thanksgiving launder this white supremacy and genocide through the lens of food and meal sharing.

“The hallmark success of these holidays inform supply and demand chains that make inhumane requirements of primarily Black and Brown farmers and laborers during climate crises, all while the majority of communities facing food scarcity are those providing the labor for the rest of the country to eat,” says Wise.

This exploitative food supply chain has been working overtime through the pandemic. Outbreaks among racialized and migrant food supply workers account for some of the worst instances of coronavirus spread in Canada and the United States, and MacGillivray points to Donald Trump’s executive order deeming slaughterhouses essential businesses as a demonstration of violent policy in food supply.

“Forcing Black and Brown folks to choose between life and livelihood is a racist, colonial tactic,” says MacGillivray. “Industries ganging up to push through exemptions that will reap more profit and cost workers their safety from both the danger of the machines and COVID-19 that they then take home to their families and communities is racist.”

The ramifications of this system range from worsening climate crises to adverse health effects that disproportionately impact racialized communities. “Industrial agriculture and the industrial supply chain has historically led to negative impacts on the air, water, and soil, and subsequently the nutrition of many of this land’s inhabitants,” says Anderson.

MacGillivray says that our food supply system “models extracting, exclusion, scarcity, and greed,” while on the other hand, “Traditional food practices are in reciprocity and kinship with the land.”

Programs like Seeding Sovereignty, Growing in the Margins, Feed Black Futures, Soul Fire Farms, and many more across the world are working to center and restore those food systems. Sundance teaches her cohorts farming techniques like interplanting, crop rotation, and succession filling while rooting them in anti-oppressive lenses. Anderson notes that Afro-Indigenous farming practices like polyculture, composting, water harvesting, and more work to remediate soil, increase biodiversity, reduce pests, and restore damaged land.

There is no oppression in nature. - Ali Anderson from Feed Black Futures

Anderson continues that the forest and its resource-sharing networks, like root and mycelium systems that share nutrients and minerals, are instructive. “The forest offers a profound guide of how to live in community, share resources, and support one another. There’s no need for systems of incarceration when communities are cooperative and interdependent like we see in the forest. There is no oppression in nature.”

Moving towards this food system is simple: give land back to Black and Indigenous communities. In her book Farming While Black, Penniman states that enslaved Africans generated nearly $10 trillion of wealth. Reparations for this plundered wealth in the form of money, land, and other resources are necessary to achieve equitable conditions for Black and Indigenous communities in North America.

Penniman says that after the Civil War, Union army general William Sherman met with free Black communities to assess their needs. “They said, ‘What we need are homes and the ground beneath them, so that we can plant fruit trees and say to our children: these are ours,’” says Penniman. “You have to wonder how we as a society justify that approximately 98% of the farmable land in this country is white-owned.”

Moving forward requires not just material investments, but also a system that rejects settler-colonial capitalism, resource extraction, and land abuse. “We need an upheaval of all institutions that systemically benefit from us not having access to our own lands,” says Wise. “Everything that has been done to our lands has been done by force.”

This begins, Wise says, with acknowledgement of wrong-doing. “If you don’t know who or what was displaced in order for you to have a home, build a community garden, or host land projects on, you’re already disregarding the most intrinsic protocol of being a guest on someone else’s territory,” she says.

Kabui notes that upending this system will be challenging. “These people have a system that’s working,” he says. “We are fighting against a very potent force.”

Kabui says that when he thinks of food sovereignty, he’s reminded that compromise is not an option. This means he will cut corners on spending for most of his needs, except for food. “I don’t have a budget for food,” he says. “You don’t have a budget for freedom. You will fight your ass off until you become free. At any cost, by any means necessary, as Malcolm X would say.”

Correction: An earlier version of this article misattributed a quote from Janet MacGillivray to Eryn Wise.

More like this
When the pandemic hit, Black Americans embraced a sacred tradition of food sustainability
By Vanessa Taylor
What cities will be most affected by climate change?
By Vanessa Taylor
Are electric cars really green?
By AJ Dellinger
Stay up to date