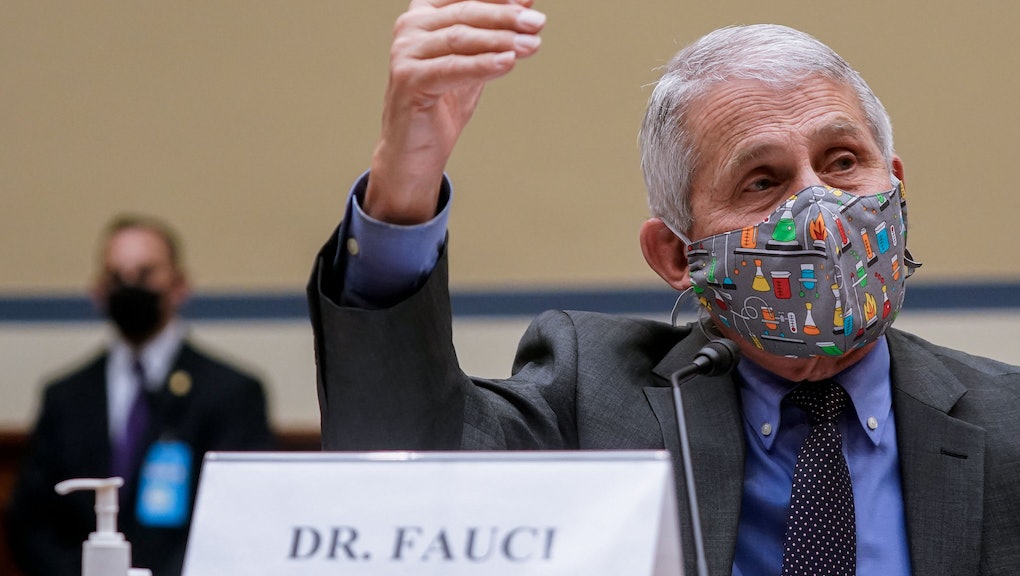 Years from now, when historians look back on the chaotic, horrifying, tragic months of the coronavirus pandemic, their narratives will largely center around three key figures: former President Donald Trump, whose callous ineptitude and bumbling hubris set the stage for one of the most most devastating medical crises in modern history; President Joe Biden, currently overseeing the country's return to something vaguely resembling normalcy; and Dr. Anthony Fauci, the infectious diseases expert whose name has become virtually synonymous with how the United States did (and didn't) respond to a plague that killed more than half a million people in this country alone.

Now, thanks to a massive tranche of emails obtained through separate Freedom of Information Act requests from BuzzFeed News and The Washington Post, the public — as well as those future historians — has more insight than ever into just what the man at the center of America's coronavirus response was doing in the early months of the pandemic.

While the sheer size of the email trove makes it difficult to identify any single, consistent throughline in Fauci's communications, the documents do nevertheless paint a picture of a man in constant communication with everyone from titans of industry to celebrities to ordinary Americans anxious about what was, at the time, a still new and deeply not-understood disease.

"I understand Vice President Pence has ordered you to not inform the public about coronavirus without approval. This is quite terrifying, especially since Trump has already shown his desire to spread false or incomplete information about this public health crisis," one unnamed woman, who managed to find Fauci's official, unlisted government email, wrote in a panic.

“I’m planning to fly domestically TOMORROW," she added. "Is it safe??"

In response, Fauci acknowledged that "there is much misinformation." "I actually have not been muzzled at all by the vice president," he continued. "And BTW, it is safe to fly domestically."

The whole exchange took place in late February 2020. In the months that would come, the urgency and severity of what was happening across the country — and the world — would come into even sharper focus.

To highlight just how sharply Fauci's opinion on the virus shifted, consider his advice just weeks before encouraging domestic flight. "The typical mask you buy in the drug store is not really effective in keeping out virus, which is small enough to pass through material," Fauci wrote on Feb. 5, 2020. "It might, however, provide some slight benefit in [keeping] out gross droplets if someone coughs or sneezes on you."

Just two months later, the Centers for Disease Control and Prevention announced that everyone should wear cloth masks — even non-medical grade ones — writing that "cloth face coverings fashioned from household items or made at home from common materials at low cost can be used as an additional, voluntary public health measure." As the pandemic dragged on, it became clear just how significant wearing a mask as part of a general series of protective measures could be.

In one of the more poignant exchanges revealed by the emails, a top Gates Foundation executive used his time writing to Fauci to urge the doctor to take particular care of himself.

"I see you on TV almost every day, and although you continue to have considerable energy, I am seriously worried about you," Gates Foundation HIV program director Emilio Emini wrote. "The nation and the world absolutely need your leadership."

Actress Morgan Fairchild makes an appearance in the email trove, offering in late February her help "send[ing] good information out to the public" through her Twitter account and its 100,000 followers.

"It would be great if you could tweet to your many Twitter followers that although the current risk of the coronavirus to the American public is low, the fact that there is community spread of virus in a number of countries besides China and including South Korea, Japan, Italy, Iran among others poses a risk that we may progress to a global pandemic of COVID-19," Fauci replied.

"The American public should not be frightened, but should be prepared to mitigate an outbreak in this country by measures including social distancing, teleworking, temporary closure of schools, etc.," he added.

The emails also show a man who was very cognizant of his place in the zeitgeist, writing at one point "truly surrealistic. Hopefully, this all stops soon," in response to a Washington Post article about the cult of personality amassing around him. Forwarding an article in a similar vein along to a friend, Fauci wrote that "our society is really totally nuts."

More like this
Trump wanted to quarantine Americans at Gitmo last spring, according to a new book
By Rafi Schwartz
This anti-vaxx doctor is seriously telling lawmakers vaccinated people are "magnetized"
By Tracey Anne Duncan
Marjorie Taylor Greene rejects the "so-called science" of evolution
By Rafi Schwartz
Stay up to date