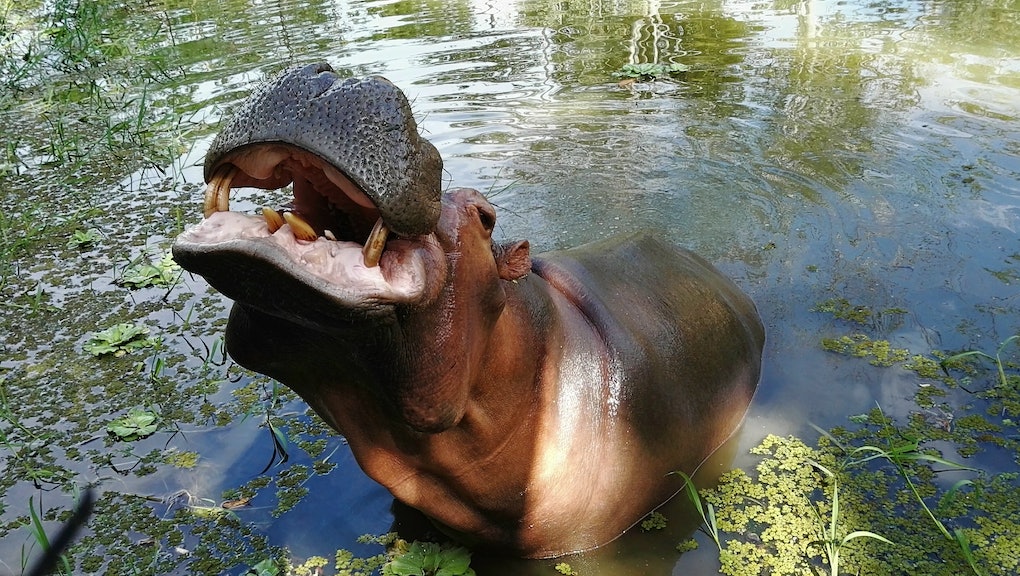 Invasive species typically get a bad rap for destroying local ecosystems. For decades, the same was thought to be true of a herd of hippos in Colombia descended from Pablo Escobar's personal zoo. But a study that was recently published in the Proceedings of the National Academy of Sciences found that some non-native species can take over vacant roles in an ecosystem, restoring ecological traits that haven't been seen since the prehistoric ages. During their research, scientists examined the impact of Escobar's cocaine hippos to learn how these invasive mammals helped regrow parts of the Colombian environment that had gone extinct. By doing so, the team hoped to encourage further studies of invasive species without the negative bias that generally clouds research on the subject.

To be clear, Escobar's hippos have already disturbed the local environment quite a bit. Herds of the giant animals have frightened locals due to their reputation as one of the most dangerous creatures on Earth. The hippos' poop — which provides life-giving nutrients for the rivers in Africa — has clogged the already-crowded Colombian rivers with too many nutrients, causing an overabundance of algae and suffocating fish. And the hippos have shown no sign of dying off. In fact, they've flourished from a small group of four to a glorious herd of 80.

But not everything about the hippos is bad. Previous studies on the hippos' impact suggest that the nutrients they provide to the waters could be much needed, since there are no longer any large herbivores native to the area. They also keep grasses from overgrowing by eating them, like gardeners keeping plants in check. And the hippos, no matter how threatening, have wedged into the hearts of many locals. When one of them was killed in 2009, the public protested, stalling any other attempts to simply hunt the aquatic animals down.

The authors of the study compared the current-day ecosystem with the ecosystem of the Late Pleistocene, which was approximately 130,000 years ago. During the Late Pleistocene, there were large herbivores, like giant sloths, that managed the local wildlife by eating plants and providing nutrients to the environment. Once they went extinct, the ecosystem changed, and human activity went on to alter the area further. The hippos, however, have taken up the extinct herbivores' roles, turning the ecology into one that hasn't been seen since prehistoric times. The invasive hippos have, in other words, 'rewilded' and restored parts of the natural habitat of Colombia.

The coke hippos aren't the only invasive species that have taken on a vacant role. The researchers noted that the wild pigs of the U.S. have done the same. Farmers have despised the pigs for ruining crops while 'rooting' for food, but this is a role that other larger, extinct herbivores have done in the past. And the turning of the soil that these species did was necessary to help the natural environment flourish.

"[Rooting] actually does some interesting things," lead author Erick Lundgren told The Guardian. "In Tennessee, they've found that trees actually grow faster because of the rooting of wild boar because they're incorporating leaf litter into the soil, increasing decomposition rates and more nutrients become available quicker for trees."

By studying the pros and cons of these invasive species, Lundgren and his team hope to overcome the bias that can ruin objective research into the effects of these animals. "The word 'invasive' doesn't really leave any room for organisms that do something that's beneficial for another species. 'Invaders' don't really help anything. And with that kind of anthropomorphic branding, you end up with a very limited range of research questions that are usually asked."

More like this
The Southern Ocean is officially our planet's fifth ocean
By AJ Dellinger
Somehow the Swiss Alps are still growing, shocking scientists
By Tebany Yune
An oddsmaker explains why aliens are most likely to attack the U.S. first
By AJ Dellinger
Stay up to date