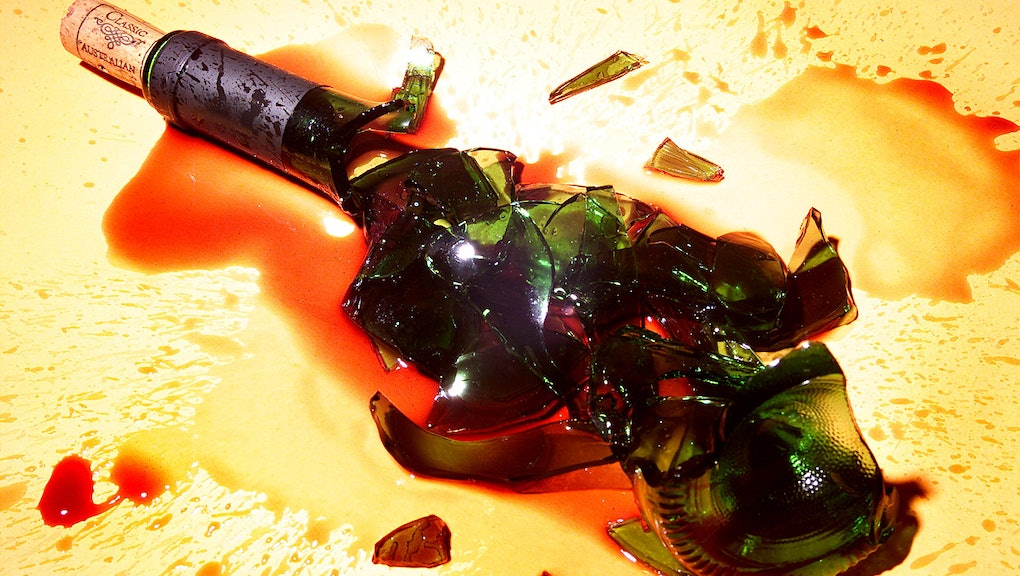 Like many during the early stages of the pandemic, I started drinking more than usual to self-soothe. My partner and I began frequenting our neighborhood wine and spirits shop, and sipping a few drinks, a few nights a week. “Fuck it, I deserve this,” I’d tell myself, as I poured myself a third shot of bourbon. But as 2020 wore on, the short-term relief all that booze delivered no longer seemed worth the hangovers and disrupted sleep, which only worsened my already amplified anxiety long-term.

Now, as we near the Panniversary, I imbibe almost exclusively on weekends, and even then, only in moderation. Apparently, I’m not alone in tapering off my drinking habits. Why are we all kind of sober right now?

To investigate what could be underlying this dry spell, I spoke to people who’ve ditched alcohol altogether during the pandemic. Based on their experiences, as well as my own, this moment has forced us to evaluate our reliance on drinking to cope and explore other outlets for our stress that might better serve our mental and physical well-being.

Personally, the pandemic has taught me to view my body as a delicate machine whose equilibrium I need to constantly maintain. I’ve grown more attuned than ever to the messages it conveys to me, and learned to heed them. A headache might be a reminder to drink more water, an achy back to stand and stretch, agitation to pause work and step outside. A sleepless night, followed by achy muscles, sadness, and anxiety the next day is usually a reminder that I overindulged, and need to rest and hydrate — and chill on the booze next time.

This heightened sensitivity to my body’s needs stems from a desire, on the one hand, to avoid anything that could compromise my immunity, especially now, but also to leave enough bandwidth for me to weather the constant stress of this moment. The past few months have been marked by the loneliness of social isolation, grief over the lives and experiences lost, rage at a president who didn’t give a shit, and fear that COVID would claim my parents when they both contracted the disease. My sad, anxious, hungover self would be ill-equipped to navigate these challenges.

“I can’t believe I endured such debilitating pain for so long,” journalist Jenna Wortham writes in the most recent issue of her newsletter, Channeling, when describing her efforts to routinely unclench her jaw, cook dinner, and basically “cut out the unnecessary pain in [her] life.” I 100% relate. How can I focus on staying afloat if I’m so preoccupied with muscling through physical and mental discomfort?

Ruth Barrett, a 33-year-old digital PR consultant in the U.K., quit booze for reasons similar to mine. Before the country entered lockdown in March, she’d attend industry events in and out of work where she felt inclined to drink to fit in. Knowing that alcohol is a depressant and can worsen anxiety, she and her husband both decided to stop drinking during lockdown. “I had been tracking the coverage of the pandemic since November 2019 and suspected that we may be in for a rough ride, and so decided to quit drinking in lockdown so as not to add to the stress of the situation,” she tells me. They sipped their last drink on their wedding day, less than a week before lockdown.

These days, she feels “more equipped to deal with stressful situations,” and approach them with more thoughtfulness and consideration. “I have so much more energy and a clear mind ready for the day ahead,” she says. She naturally awakens at 6:00 every morning and fills the time alcohol once occupied in her life with self-care activities, like yoga, as well as online courses on well-being, and feminism and social justice. “I’ve also started offering free PR to charities… which is a much more positive use of my time,” she says. And she feels “healthier than ever before.”

Barrett doesn’t plan to resume drinking, even after the pandemic ends. Plus, the vast array of alcohol-free options nowadays allow her to enjoy the flavor of drinks like wine and prosecco, sans the booze and its less-than-fun mental and physical effects. “I really don’t miss it,” she says.

Before the pandemic, 36-year-old Joshua Baker of Nashville regularly stopped at his local bar on his way home from his job at a medical examiner’s office. “I would get there at happy hour… and I would drink a lot,” he recalls. He liked the welcoming atmosphere — it was the sort of place where the bartender knew what he wanted before he even ordered it.

But drinking to oblivion was straining his relationship with his then-partner. Alcohol shortened his temper and sharpened his tongue. On his days off, he’d dip into a nearby taco bar and drink multiple margaritas without telling her. “In the moment, when you’re inside of it, you don’t notice how much of a problem it is,” he says.

He realized that he had a problem last April, when his go-to bar shut down in response to the pandemic. On his way home from work, which still required him to show up in-person, he’d glance at it to check if it was open — even if he knew it wouldn’t be. Interpreting this as a sign that he wasn’t ready to accept the bar’s closure, he decided to quit drinking.

Sobriety has helped Baker better understand why he turned to alcohol in the first place and realize that it wasn’t helping him in the way he thought it did. “It was definitely a way for me to open up,” says the self-identified introvert. But while alcohol might have made it easier to approach people, it didn’t allow him to truly connect with them. He realizes that his relationship with the patrons at his favorite bar —which consisted of getting wasted with each other — was a superficial one. None of them have reached out to him since the bar closed.

“These relationships were only built upon us all being sad regulars at the same bar,” he says. “I’m not saying that they were terrible people… but that’s the only time I talked to them.”

He’s had to relearn social skills without alcohol as a buffer, which felt awkward at first. But over time, the conversations he’s had with friends and people at the café up the road form where he lives have shown him that he’s capable of opening up to others while sober. Now he approaches them as a more genuine version of himself, partly because of the solitude the pandemic has afforded him. “I’ve had to really kind of turn inward and see what makes me, me.”

Baker also owes the deepened authenticity of his relationships to the confidence he’s gained from committing to sobriety: “I’ve made up my mind to do something, and I’m doing it.” That confidence, in turn, has generalized to his long-term aspirations, and sobriety has freed up his time to pursue them. In addition to working full-time, he’s finishing up his associate degree. Afterward, he plans to earn his bachelor’s degree and possibly even apply to graduate school.

He feels better physically, too, and he’s replaced drinking with self-care habits, including skincare and running. “I’ve always liked running but I never had time to because I’d get off work, go drink, and then go home and pass out,” he says.

When Baker visits his local café, he sits at the bar, whose walls are lined with liquor. Still, they don’t awaken an urge to drink. He wants to stay sober, even when bars reopen. “I know how good I feel now, and I know how disappointed I would be in myself if I did begin to drink,” he tells me.

I still plan to drink once restrictions lift, but I think this lull was important for me to better understand my relationship with alcohol, and how it fits into my life as a whole — in other words, how turning to alcohol to cope with one source of stress affects my ability to cope with all the others. The pandemic has forced us to reconsider so many things we’ve long accepted as norms, and drinking is no exception.

More like this
How to embrace body acceptance without being ableist
By Melissa Pandika
What is an e-bike and should I get one?
By Caroline Shannon-Karasik
Should vaccinated people wear masks indoors?
By Peter Chin-Hong
Stay up to date