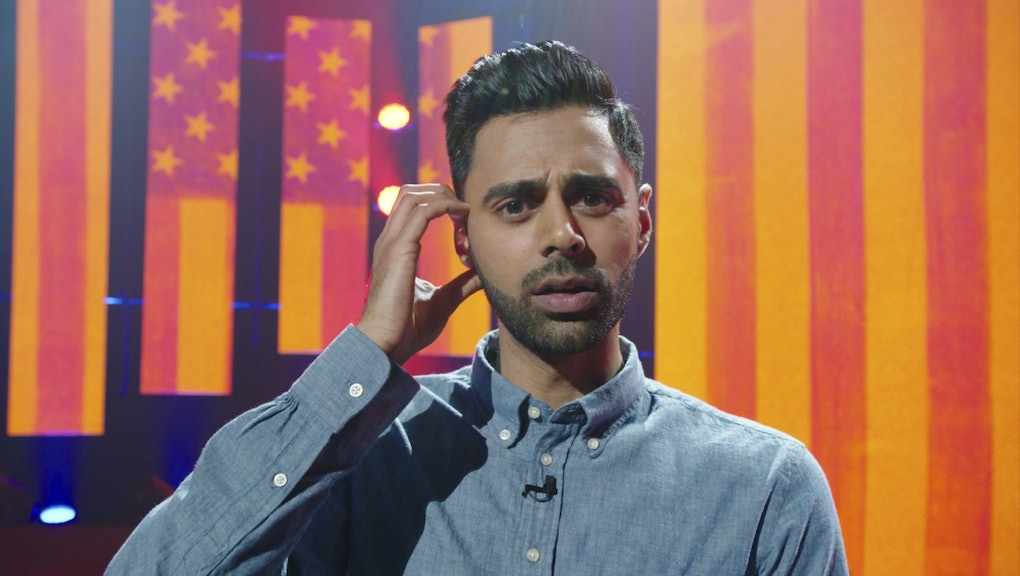 Tell me if you’ve seen this one before: a streaming service cancels a beloved series with a charming, well-liked host at the worst possible time. On Wednesday, Hasan Minhaj announced that Patriot Act has ended after 39 episodes and six volumes. The pseudo-late night series, which slotted into the Ted Talk-adjacent explainer format but still brimmed with jokes, was the first weekly talk show hosted by an Indian-American in the US. The show was quickly mourned on Twitter as a sizable loss in an election year and moment of racial reckoning, along with some light forecasting of Minhaj’s next steps from here.

Netflix hasn’t been able to get a late-night show to stick in the same way as HBO’s next-day virality from Last Week Tonight with John Oliver. Other attempts into the late-night space, like Chelsea Handler’s talk show Chelsea, along with Joel McHale and fellow White House Correspondents Dinner alum Michelle Wolf, haven’t lasted at the platform. Credit it to Netflix’s primary mode of delivery — weekend marathons dumped all at once — not quite syncing up with talk shows, or less incentive to chase YouTube virality, but it’s still surprising to see Minhaj’s show go this soon. While we wait to find out whatever Minhaj tackles next, let’s check out some of the best segments from Patriot Act.

Minhaj thrives in breaking down generation-hobbling crises into something equal parts digestible and dispiriting. Perhaps the best case of this comes in his segment on student loans, which surveys his live studio audience to find $6 million in student loan debt and runs through a comprehensive history of how predatory lenders helped grow student debt exponentially since 2006. Bookended by an incredibly bleak real-life TruTV show about paying off your student loans and a more openly nihilistic spoof, this became something of a signature issue for the host. After this aired, he would go on to appear before a House Financial Services Committee hearing to call for reform and debt forgiveness.

More than a year before its systemic rot would be protested on a never-before-seen, international scale, Minhaj dug into the corrupted core of American policing. In this installment, he runs through the violent training officers receive, how they’re all but completely isolated from legal consequences through qualified immunity, and the police unions’ power to quash reform efforts. Near the end, the headline “Minneapolis Mayor Bans ‘Warrior’ Training” flashes onscreen, foreshadowing the ineffectiveness of reform efforts that stop short of defunding and abolition.

Right out of the gate, Minhaj challenged the powerful in unprecedented ways for streaming service late show. On just his second-ever episode of Patriot Act, Minhaj took aim at Saudi officials for the murder of Washington Post journalist Jamal Khashoggi, and the totalitarian leanings of Crown Prince Mohammed bin Salman, who was once hailed as a reformer. In 2019, Netflix removed this episode from the service in Saudi Arabia, following government warnings that it violated the kingdom’s anti-cybercrime law. It’s still available to view in full on YouTube in the country — and on all platforms stateside —where it remains well worth a watch.

Early in this segment, Minhaj jokes that this is the one episode he’s truly qualified to talk about without immense help from the research team. Even so, he begins by lampooning streetwear and hypebeast culture, with clips of incredibly long lines to get the latest Supreme merch. Then, he gradually connects the dots between Supreme’s sinister connections to the Carlyle Group, which is just a slight degree of separation from the military industrial complex and Saudi fighter jets that bomb Yemen. No ethical consumption under capitalism, as they say, but he does a good job of dissecting where the popular brand’s profits are funneled.

The News Industry Is Being Destroyed

The great crisis plaguing journalism isn’t Donald Trump or so-called cancel culture preventing six-figure columnists from admitting they hate trans people and immigrants, but private equity firms ravaging websites and local newsrooms. Patriot Act got this, and went deep on how the big tech companies, paired with private equity firms, have chased ad dollars and gutted newsrooms in the name of marginal profits. At his best, Minhaj and the writing team could zero in on the underlying story behind a commonly recognized, but little understood perilous situation.

Another recent segment, this finds Minhaj at his most somber and urgent in the early days of the George Floyd protests. Here, he runs through the initial wave of protests, looting, and chameleonic right-wing reaction to Floyd’s death, before wading into more personal territory. An incensed Minhaj deconstructs the Muslim-American and Asian-American complicity in anti-Black racism — both specific to the Floyd killing and more generally. The entire segment underscores what Netflix is walking away from — an underrepresented perspective in popular culture at a time when it’s needed more than ever.