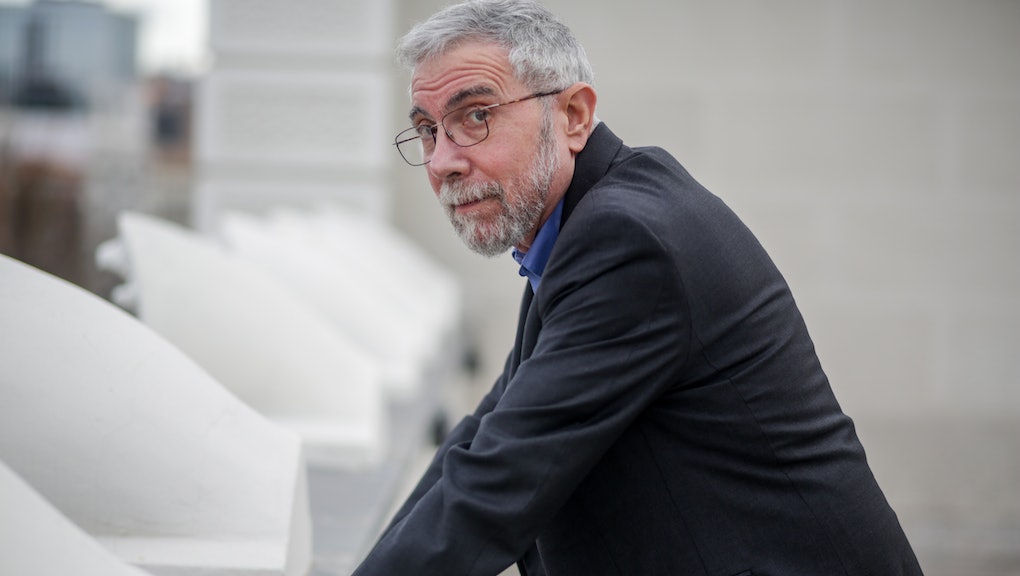 New York Times columnist and Nobel Prize-winning economist Paul Krugman is, ostensibly, an incredibly smart man. He's written dozens of books, been awarded multiple honors for his academic work, and is broadly seen as occupying the uppermost echelons of political punditry in the United States.

Despite his admittedly impressive CV, however, Krugman somehow managed to blunder his way into becoming the main villain of the day online, after posting a bizarre, ahistorical, revisionist take on the ways the 9/11 terrorist attacks did — and, per Krugman's patently untrue mischaracterization, did not — change the country in their wake.

It's hard to tell just what the hell Krugman is talking about when he insists there was no "mass outbreak of anti-Muslim sentiment and violence." Indeed, anti-Muslim hate crimes skyrocketed following Sept. 11, 2001, and have remained in the stratosphere to this day, ticking upward even more in the years since Donald Trump was elected president.

As was pointedly noted on Twitter by journalist and extremism expert Talia Lavin, there is a de facto Muslim ban in effect at this very moment, disguised as a travel ban on specific countries that share a majority-Muslim population solely by coincidence In fact, the Department of Justice has an entire section dedicated to combating the spike in hate crimes against Muslims, Sikhs, and people of Arab or Middle Eastern decent following 9/11. And, lest we forget, former President George W. Bush used the attacks on the World Trade Center and Pentagon to launch two separate wars in the Middle East — something one might argue qualifies as both an undeniable example of, and contributing factor for, the "anti-Muslim sentiment" Krugman claims never happened.

Krugman didn't stop at ignoring mass xenophobia, either. Incredibly, he went on to assert that "daily behavior wasn't drastically affected" by the attacks, citing a "lovely" vacation he took a few months later because fares and room rates were "so cheap."

At this point, I ask that you, dear reader, try to remember the last time you were able to wear shoes through airport security, or when you last watched cable news without a permascrolling ticker along the bottom of the screen. With all due respect to Krugman's affordable trip to the Virgin Islands, the idea that people's everyday existence wasn't "drastically affected" is simply ridiculous. In ways both big (two wars, the subsequent Patriot Act of national security authoritarianism, the re-election of Bush) and subtle (the aforementioned travel hassles and shifts in our media ingestion habits) our everyday lives have been radically warped by the events of 9/11.

That Krugman may not feel those changes as acutely as others is less a sign of everyday placidity and more an inadvertent admission that he is in a privileged enough position in life to be insulated from the sort of seismic shifts that torqued the lived experiences of so many others who don't write New York Times columns from ivory towers.

In part, I suspect, Krugman's detachment from the historical record is, at least in part, a result of the chaos of the past four years under the Trump administration. To go from someone who was once publicly excoriated for a "growing tendency to attribute all the world's ills to George Bush" to publicly claiming the country handled the defining moment of Bush's presidency "pretty calmly" is enough of a whiplash-inducing pivot that it could either be attributed to pure bad faith — something I don't think is at play in this case — or the discombobulating realignment of American society under Trump.

If "this is not normal" has become the cliché catchphrase of the past several years, then Krugman is, I think, guilty of taking that glib sentiment to its logical extreme. If this isn't normal, then what came before, by comparison, must be. It's a fallacy that essentially serves to absolve past wrongs in the service of current ones. It is, in other words, bullshit.

Krugman has yet to publicly address the furor caused by his tweets. Maybe he'll write a column explaining what he meant and why he felt the need to share his Sept. 11 musings with the bare minimum of context or explanation. Or perhaps, come Sept. 12, he'll simply move on to the next thing.