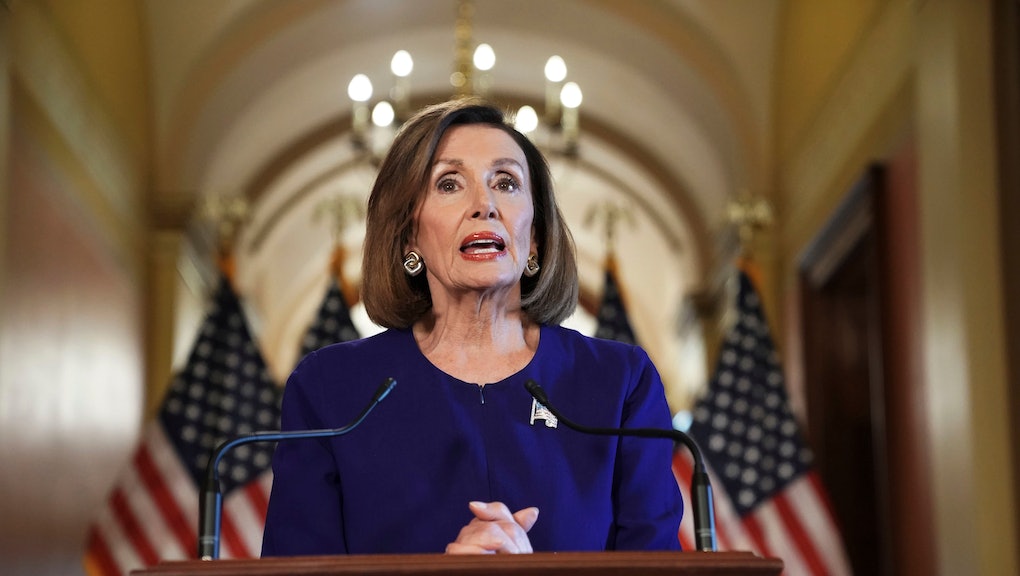 House Speaker Nancy Pelosi announced Tuesday that she is backing a formal impeachment inquiry into President Trump. Pelosi, the leader of the Democratic-controlled House, had long resisted calls from the more progressive wing of her caucus to impeach the president.

"For the past several months, we have been investigating in our committees and litigating in the courts so the House can gather all the relevant facts," Pelosi said Tuesday. "This week, the president has admitted to asking the president of Ukraine to take actions which would benefit him politically," revelations that made clear the "dishonorable fact of the president's betrayal of his oath of office, of our national security, and of the integrity of our elections," she said.

As such, the House is "moving forward with an official impeachment inquiry," Pelosi said. The six House committees with investigative power — Judiciary, Intelligence, Oversight, Financial Services, Ways and Means, and Foreign Affairs — will compile their evidence supporting impeachment against Trump and present those materials to the Judiciary Committee. The Judiciary Committee will then review the information and decide whether to introduce articles of impeachment to the full House.

"The president must be held accountable," Pelosi said. "Nobody is above the law."

The sudden shift toward impeachment comes amid a growing controversy surrounding what Trump may have said on a phone call with Ukrainian President Volodymyr Zelensky in July. An anonymous member of the intelligence community filed a whistleblower complaint in August after Trump made a troubling "promise" to a foreign leader during a phone call; The Washington Post reported that the conversation was with Zelensky.

Details have emerged over the last week that Trump pressured Zelensky to investigate Vice President Joe Biden, currently his leading competitor in the 2020 election, over unfounded claims that Biden acted improperly to oust a Ukrainian prosecutor who had once led an investigation into a company his son Hunter was involved with. While working in the Obama administration, Biden did advocate for the removal of prosecutor Viktor Shokin, but Biden's work was backed by the international community and the investigation into the company Hunter Biden had been involved with was long dormant at the time.

Trump initially described his conversation with Zelensky as "perfectly fine" and "pitch perfect." But after reports revealed the partial contents of the call, he became increasingly defensive and repeatedly evoked the baseless claims against Biden. On Sunday, Trump outright admitted to raising the Biden issue with Zelensky and encouraging the Ukrainian leader to investigate the alleged "corruption."

On Monday, he further conceded that he had threatened to withhold millions in aid to Ukraine, again citing "corruption." The aid package in question has been provided to Ukraine annually since Russia invaded Crimea in 2014, and "questions have surrounded whether the president sat for months on the security aid ... in order to compel Zelensky to act" on the Biden matter, The Daily Beast reported. If true, that would boil down to Trump essentially bribing a foreign leader to intervene against one of his political rivals.

Calls for impeachment grew rapidly this week in light of the revelations. An op-ed in the Washington Post late Monday penned by seven freshman Democrats calling for proceedings to begin if the Ukraine allegations are true gave Pelosi the "cover" she needed to back impeachment, per NBC News. Momentum continued to build as even vulnerable Democrats in swing districts started to support the idea, and Pelosi's fellow holdouts like Georgia Rep. John Lewis and California Rep. Adam Schiff had also come around.

Trump has denied tying the aid money to a Biden probe in his call with Zelensky, and he tweeted Tuesday that he would release the "fully declassified and unredacted transcript" of their conversation. "You will see it was a very friendly and totally appropriate call. No pressure and ... NO quid pro quo," Trump said.

But the Ukraine-Biden ordeal is thought to be just one aspect of the whistleblower complaint, which the Trump-appointed inspector general for the intelligence community deemed "urgent" and credible. It's unclear what else may have been included in the complaint because the White House has blocked its full disclosure to Congress. Meanwhile, as HuffPost noted, releasing transcripts instead of tapes has a Nixonian sheen.

Pelosi announced Tuesday in a joint statement with Maryland Rep. Steny Hoyer, the second-ranking House Democrat, that the lower chamber would additionally vote Wednesday on a resolution declaring "Congress's disapproval of the administration's effort to block the release of the complaint and the need to protect the whistleblower." The Senate on Tuesday voted unanimously to support a resolution demanding the whistleblower complaint be given to the Senate Intelligence Committee.

As of Tuesday morning, more than two-thirds of the Democratic caucus supported formally initiating impeachment in some way. Several presidential candidates also spoke in favor of the process — most notably Biden himself, who had stopped short of advocating impeachment even as more and more of his presidential rivals supported it. "It would be a tragedy, but a tragedy of his own making," Biden said of a Trump impeachment.

White House Press Secretary Stephanie Grisham, meanwhile, said Tuesday that "Democrats continue to weaponize politics," despite the fact that Trump has repeatedly admitted to the conduct in question. While reports were trickling out ahead of Pelosi's Tuesday announcement, Trump called the situation "the continuation of a witch hunt," using his long-standing nickname for the special counsel investigation that wrapped earlier this year.

"They say it's a positive for me," Trump told another reporter, though he declined to say who specifically had advised him that impeachment proceedings would be good for his presidency. After Pelosi's announcement, he tweeted: "PRESIDENTIAL HARASSMENT!"

More like this
A Philly foster agency can continue discriminating against LGBTQ families, SCOTUS rules
By Rafi Schwartz
"She's gonna disappear": A GOP congressional candidate threatened to sic Russian hitmen on his opponent
By Rafi Schwartz
The GOP has tried to kill Obamacare for a decade. SCOTUS just saved it for a third time
By Rafi Schwartz
Stay up to date