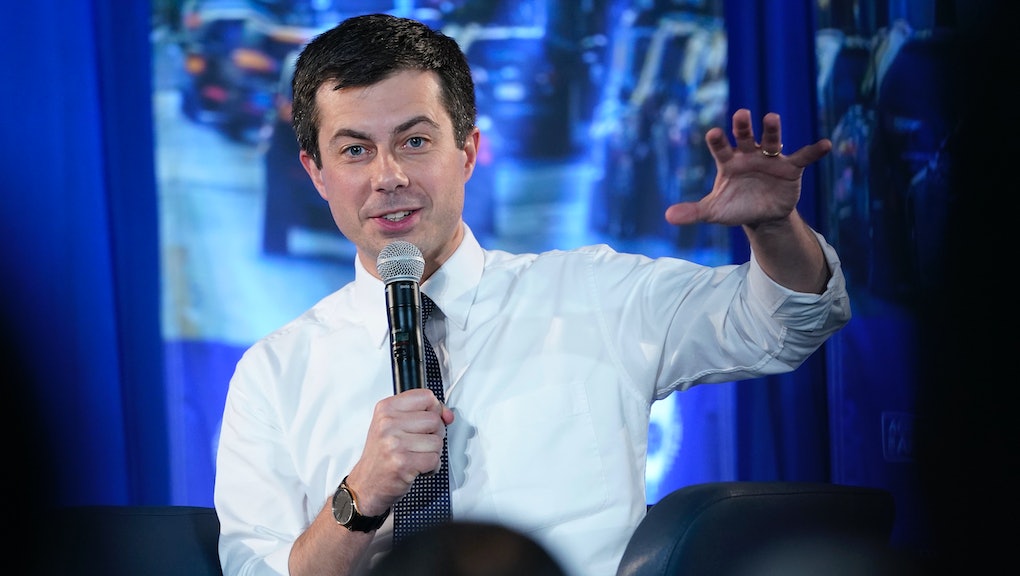 After mounting calls for transparency, South Bend Mayor Pete Buttigieg has promised to release information about his previous work at the consulting firm McKinsey & Company. Buttigieg's work for McKinsey had come into question after his steadfast refusal to discuss former clients, citing a non-disclosure agreement he'd signed during his employment, and after a New York Times report last week revealed that the firm had assisted the Trump administration in enacting its harsh immigration policies. Buttigieg had also faced calls to open his fundraisers to the media amid the controversy.

On Monday, the campaign announced that McKinsey had given him permission to share the names of clients he worked with during his years at the firm, where he was employed from 2007 to 2010, according to The Washington Post. Buttigieg campaign spokeswoman Lis Smith confirmed the news on Twitter.

McKinsey released a statement explaining the rationale behind their decision, but emphasized Buttigieg cannot share any details of his work with the clients, per The New York Times.

“We recognize the unique circumstances presented by a presidential campaign,” a McKinsey spokesman said. “Any description of his work for those clients still must not disclose confidential, proprietary, or classified information obtained during the course of that work or violate any security clearance.”

McKinsey is a consulting firm that advises companies on how to streamline their business practices to maximize profit. The company has been criticized for its controversial clients, which include Immigration and Customs Enforcement and opioid manufacturers.

In an additional bid for transparency, Buttigieg is opening his big-ticket fundraisers to the news media starting Tuesday. A list of his “bundlers," — donors who throw large amounts of money into campaigns — will follow.

The McKinsey kerfuffle grew after Buttigieg was challenged by fellow presidential candidate Elizabeth Warren, the progressive assachusetts senator, over transparency. On Sunday, Warren released tax information showing she made almost $2 million from legal work she did from 1985 to 2009 after ribbing from Buttigieg, according to ABC News. The mayor had said Warren should release the information in the interest of transparency, prompting her to shoot back that Buttigieg himself had ground to make up in that regard.

Warren turned the pressure back on Buttigieg and encouraged him to “open up the doors” of his fundraisers. She has also criticized opponents “who have decided to finance their campaigns by doing closed-door fundraisers, sucking up to the corporate executives, the millionaires, the billionaires.” Warren has promised that she would not attend any closed-door fundraising events, per ABC News.

This skirmish is a strange show of priorities by the Democrats as the country is wrapped up in the impeachment drama. The prevailing argument is Democrats must prove they are open-book politicians compared to the Republicans, who typically cater to corporations. In reality, though, this looks like a pointless lefter-than-thou competition, and it calls to mind the previously ineffectual attacks some Democrats have tried this primary season, like when California Sen. Kamala Harris skirmished with Warren over President Trump's Twitter account or when former Housing and Urban Development Secretary Julián Castro was accused of being too mean to Vice President Joe Biden.

After all, in the long run, information like this has little effect on voters. “This issue already had very little impact on voters’ lives, so I start from the baseline that it was not a big problem for Mayor Pete in places like Iowa or New Hampshire,” strategist Meredith Kelly told The New York Times. “But to the extent this topic matters to certain people, radical transparency should do the trick.”

Still, the Times noted in a separate story over the weekend that among voters in Iowa — where Buttigieg has gone all in, and built a solid lead in the first-in-the-nation caucus state — voters seemed largely unmoved by the McKinsey scandal, such that it was.

Either way, transparency should be a given. It’s not a talking point. And with the Democratic field in flux so close to the Iowa caucuses, it's worth asking whether attacking a surging candidate's three-year work history from a decade ago is really the best way to make a case to the American voter.