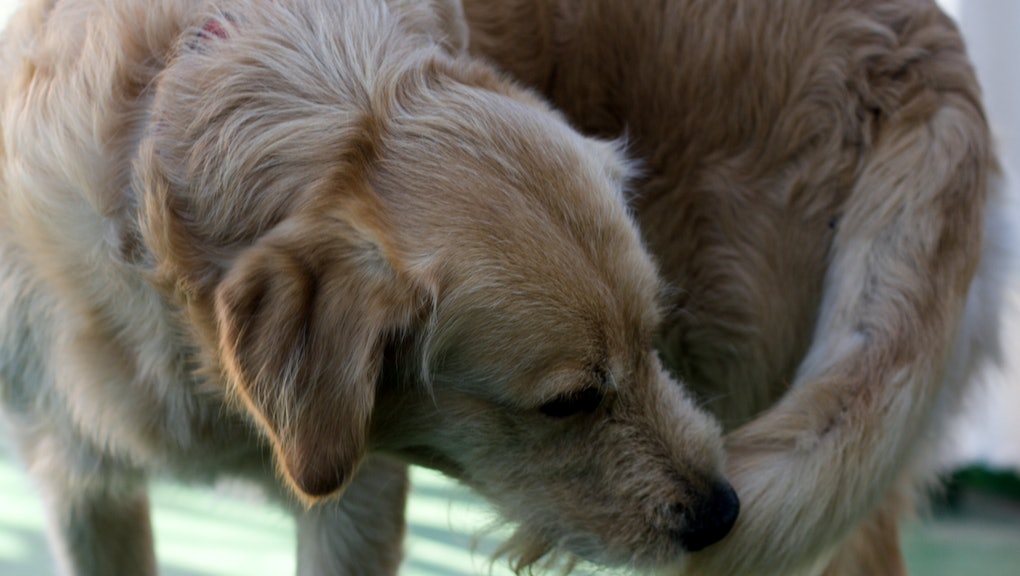 Pets and self-harm: What to do if your dog or cat hurts themselves on purpose

It’s more than safe to say that we’re overwhelmed right now — and by “we,” I mean not only us two-legged humans, but our four-legged friends, too. M. Leanne Lilly, an assistant professor at The Ohio State University College of Veterinary Medicine, tells Mic that she’s noticed “a bit of an uptick in repetitive behaviors,” although not necessarily self-harming ones, in pets that already exhibit them. But she also doesn’t rule out the possibility that pets are self-harming more these days, whether by chewing their tails or licking the same spot over and over. These behaviors are worrisome, but you can take steps to intervene. Here’s what to do if your pet is self-harming.

First off, what exactly counts as self-harm? What distinguishes it from, say, a pet scratching themselves to relieve an itch, or licking themselves clean?

Generally speaking, self-harm includes anything that involves actively removing fluffing or plumage through licking, biting, breaking, or plucking, Lilly says. These behaviors might stem from pain, allergies, skin problems, or other issues in the area, as well as stress — in which case, it would make sense if you’ve noticed your pet engaging in them lately.

Depending on your pet, all the time you’ve been spending at home might be a lot to handle. “For some dogs, having their human home all the time could be the best thing that ever happened to them,” Lilly explains, but “there are also dogs and cats who use that downtime” — while everyone’s at school or work — “to recover from the chaos of the day.”

Plus, some dogs are just introverted and don’t want constant physical interaction. (As an introvert myself, honestly, I get it.) If their humans are home 24/7 and insist on petting them, “it can be stressful,” Lilly says. And if they’re nervous around unfamiliar dogs, they might even dread their walks now that everyone is out with their puppers. It’s also possible that your fur baby may have been self-harming before the pandemic, and you just weren’t home to notice.

Certain dogs are more likely to self-harm than others. “We have some behaviors that we know are genetic and limited to specific breeds,” Lilly explains. Doberman Pinschers, for example, are known for repetitively sucking their flanks, which scientists have traced to certain chromosome sites. But other self-harming behaviors, such as excessive licking, don’t appear to be as strongly linked to specific genes, since they occur in a wide range of breeds.

While it might seem intuitive to conclude that anxious pets are more likely to self-harm, the reality is a bit more complicated. Not unlike their humans, some anxious pets are predisposed to repetitive behaviors — but some are not, Lilly says. After all, “there are plenty of anxious humans in the world who don’t engage in compulsive repetitive behaviors, but many who do.”

What should you do if you see your pet self-harming? First, “positively interrupt the behavior,” Lilly says. “Positively” is the operating word here — so no clapping, yelling, or tackling. Instead, if you have a dog, ask “Who wants to go outside?” or “Who wants to go for a car ride?” in that bright, Very Good Boy or Girl tone. If you have a cat, shake a bag of treats. Basically, occupy their brain with something else, in a loving way.

Then check for any signs of long-term damage, like blood, redness, or oozing. If you see any, schedule an appointment with your vet, Lilly adds. In the meantime, you might want to figure out a solution to inhibit the behavior from a short-term safety standpoint, like a cone.

And you’ll want to call your vet if you see your pet self-harming, even if you don’t spot signs of long-term damage. They can address the underlying cause of the behavior, which can help with preventing it long-term, Lilly says. Your vet will inspect the affected area for signs of pain, and ask about things like stressors, enrichment, and exercise in order to identify baseline needs that the behavior may be an attempt to meet. “It’s critical to not just stop at inhibiting the behavior” — because once the cone comes off, your pet might resort to it again at the same, if not greater, intensity, Lilly explains. Getting a handle on it is important, since it can predispose them to infection.

A general rule of thumb: If you’re wondering whether to call your vet about a behavior you’ve begun noticing in your pet, you probably should. “We’d rather take a call and say, ‘Let’s keep an eye on it,’ rather than have you first reach out to us when it’s already a problem,” Lilly says. She adds that most vets these days are taking precautions to minimize the risk of COVID-19 infection, such as having clients wait in their cars while their pets are being seen.

Seeing your fur baby hurt themselves can be alarming, not to mention heartbreaking. But a sensitive approach that appreciates their complexity — that is, one that identifies and confronts the origins of their self-harm — can help them stop.

More like this
How to support Black and Asian American friends without exhausting them even more
By Melissa Pandika
Didn’t get enough sleep? Here's how to survive the day, according to doctors
By Tracey Anne Duncan
Why some vaccinated people are still wearing masks outside
By Tracey Anne Duncan
Stay up to date