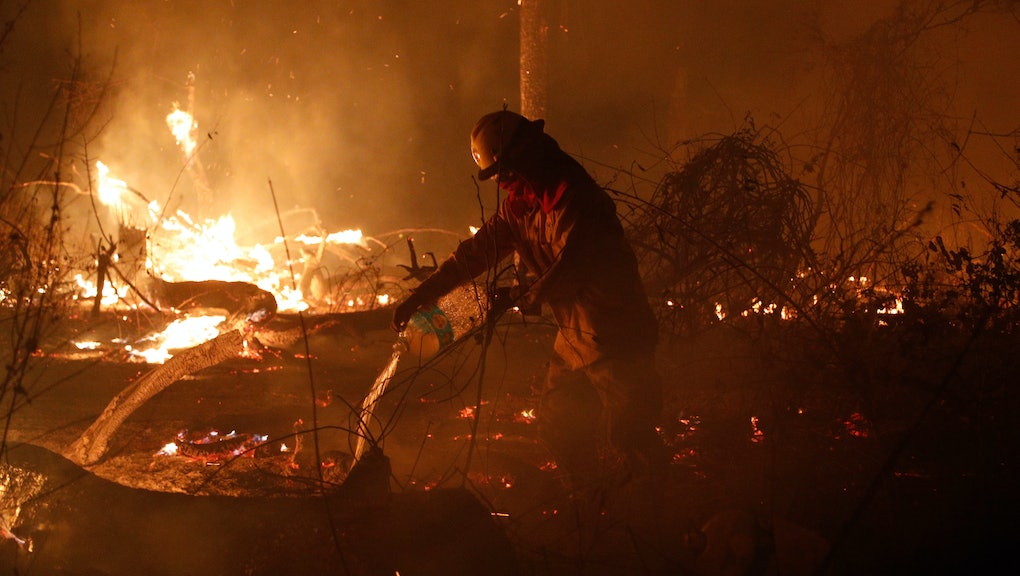 This week, the National Weather Service in Oxnard, California issued a fire weather watch for Ventura and Los Angeles counties, marking the start of what is expected to be a potentially destructive wildfire season in California. In preparation for the potential threat of out-of-control flames spreading across the state's forests, utility company Pacific Gas and Electric (PG&E) announced that it may shut off power in nearly 30 counties in order to help limit the spread of these wildfires.

If the gas and the electric company starts shutting off power on Wednesday, in advance of the fire-friendly conditions that are expected at the end of the week, it could leave as many as two million people located in northern, central, coastal and Bay Area counties without power. That includes 67 schools that would be cut off. The designed power outage could last for as long as seven days, leaving residents little time to prepare for the extended absence of utilities.

PG&E's decision may seem drastic, but it's done with good reason — especially given the company's history. Last year, the utility company copped to the fact that its equipment was likely an ignition point for the 2018 Camp Fire, one of the deadliest and most devastating blazes to ever hit California. Investigators at the California Department of Forestry and Fire Protection confirmed that suspicion earlier this year, when they announced that electrical lines owned and operated by PG&E touched some nearby trees and started the fire. The blaze that followed was nearly unmanageable. It raged for just over two weeks, burning 153,336 acres of land and destroying just about everything in its path. More than 18,000 buildings — including 14,000 homes — were lost to the fire and 86 people lost their lives, making it the sixth deadliest wildfire ever in the United States and deadliest in the last 100 years. A total of $16.5 billion in damages were done by the fire, which led to PG&E declaring bankruptcy.

While the Camp Fire was by far the worst to be set off by PG&E equipment, it was not the first. The company was responsible for a 2015 blaze outside of Sacramento that started because the company failed to maintain a tree that eventually hit one of its power lines and started the fire. It destroyed more than 70,000 acres and resulted in two deaths. In 2017, four separate fires set off in the Napa area were linked to PG&E power lines, which were hit by trees. Those fires destroyed a combined 100,000 acres and 1,475 structures. According to a report from the New York Times, PG&E has been linked to five of the 10 most destructive fires in California history. In many of those cases, the cause of the fires have been the result of the utility company violating state laws or failing to maintain its equipment.

While negligence from the utility company certainly plays a large role in these fires so do the weather that California is experiencing. Wildfires in the U.S. have been increasing in frequency and duration since the mid-1980s, around the same time that global temperatures began to rise. Climate change can contribute to weather conditions that lead to wildfires including extended periods of drought, less moisture that leads to dry soil and more flammable vegetation and shortening winters that would otherwise limit the likelihood of such blazes. The Camp Fire of 2018 was close to a worst-case scenario for California, but it is possible that more fires like it lurk in the near future thanks in part to climate change.

PG&E's decision to shut off power preemptively marks a move toward safety, but one that is fueled by the company's prior failings that resulted in irrevocable damage and loss of life. As California stares down another winter that could be plagued by fires as the Santa Ana winds — strong gusts of warm, dry air that passes through Southern California and exacerbates brush and forest fires — start to pick up. The last thing that is needed is for those conditions is to have unsafe power lines and electrical equipment serving as tinder. It is PG&E's failings to maintain proper safety standards and follow mandates from state regulators that has been the cause of these uncontrollable blazes in the past. Now, because of the company's shortcomings and spotty safety record, millions of people may have to go without power because the utility company can't otherwise guarantee their safety. That's an inconvenient outcome for the residents, for which they bare no fault. But if the alternative is another fire set by faulty or mismanaged equipment, going without power for a time is probably preferred.