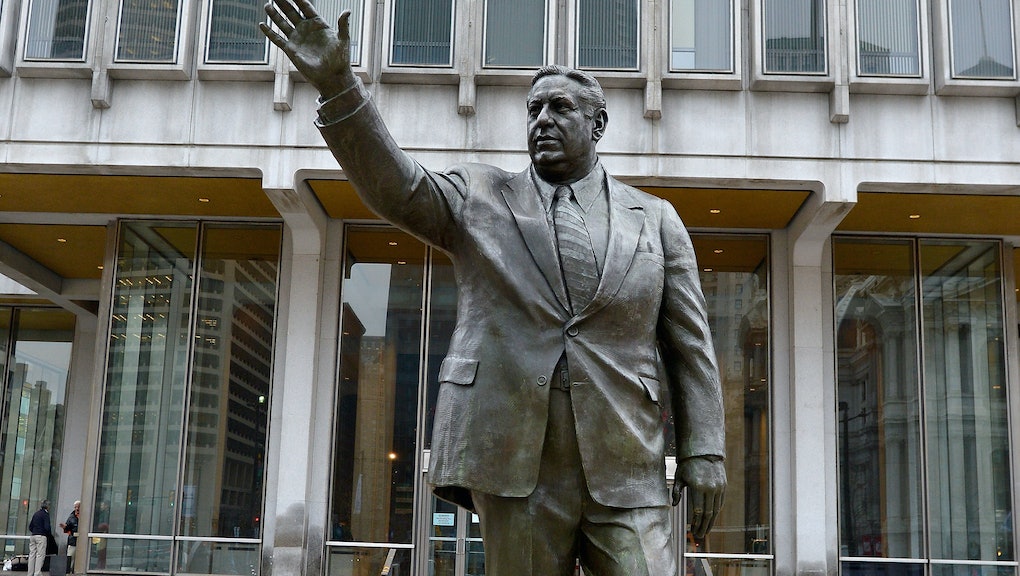 Mass protests have spread across the United States following the police murder of George Floyd in Minneapolis. Different infrastructures have become targets, with Minneapolis protesters even setting fire to the city's 3rd police precinct headquarters. In other cities, protesters are going after the racist legacies that are literally embodied in statues and monuments. Prompted by ongoing demonstrations, Philadelphia officials removed the statue of an ex-mayor who once urged supporters to "vote white."

Starting in the late 1970s, Frank Rizzo served as mayor of Philadelphia for two terms, after a three-year stint as the city's police commissioner. Known to fellow cops as "The General", Vice reported in 2015 that "Rizzo seemed to lean on cops as an instrument for heading off social change in a city being seismically altered by capital flight, and rising poverty."

That much can clearly be seen within Rizzo's legacy. In 1979, the Department of Justice charged Rizzo and other city officials with allowing police abuse. In his opinion, District Court Judge John P. Fullam noted that city officials did "little or nothing" to punish or prevent police abuse. The first-of-its-kind lawsuit found that from 1970 to 1978, police shot and killed at least 162 people.

But nobody needed an investigation to point out Rizzo's brutality, racism, or homophobia. He was loud about it. After ordering raids on Black Panther Party offices in Philadelphia, Rizzo said, "[The Black Panthers] should be strung up." In 1971, Rizzo told his supporters to "Vote White." And during his 1975 re-election bid, Vice reported that Rizzo said, "Just wait after November, you'll have a front row seat because I'm going to make Attila the Hun look like a f*ggot."

There have been repeated calls for the removal of Rizzo's statue, which was unveiled after his death in 1999. Philadelphia Magazine reported Wednesday that Philadelphia Mayor Jim Kenney (D) initially said the city would remove the statue in about a month, after protesters tried to take it down themselves earlier this week. Ultimately, the city decided to take it down overnight Tuesday.

“The continued display of the statue has understandably enraged and hurt many Philadelphians, including those protesting the heinous murders of George Floyd and too many others. I have seen and heard their anguish. This statue now no longer stands in front of a building that serves all Philadelphians," Kenney said in a statement.

He added: “The statue is a deplorable monument to racism, bigotry, and police brutality for members of the Black community, the LGBTQ community, and many others. The treatment of these communities under Mr. Rizzo’s leadership was among the worst periods in Philadelphia’s history."

Philadelphia is not the only city where protesters against racist policing and systemic inequality are going after statues. In Richmond, Virginia, protesters graffitied a statue of Confederate Gen. Robert E Lee. The Washington Post reported that the phrases included "No More White Supremacy," "Blood On Your Hands," and "Black Lives Matter." Statues of J.E.B Stuart and Stonewall Jackson, other famous Confederate generals, met a similar fate. In addition, the United Daughters of the Confederacy headquarters was set on fire early Sunday morning.

The energy spilled across the South: In Alabama, demonstrators destroyed a statue of a Confederate Navy captain, while in South Carolina, protesters targeted a monument to Confederate soldiers.

In the end, Philadelphia's hasty decision to remove the statue may have been driven by police officers' actions just as much as demonstrators'. The statue was only removed following continued police escalations against protesters. On Monday night, an armed white militia roamed Philadelphia's Fishtown neighborhood, claiming they were there to protect police. Jon Ehrens, a producer for local radio station WHYY, said the group "beat the shit out of me" because he was filming the demonstrations.

On Tuesday, Philadelphia police tear-gassed and pepper-sprayed thousands of protesters trying to flee a march on I-676. Protesters were caught on a steep embankment and had to scramble up a fence while caught in a cloud of gas. When asked about the incident, Kenney and Philadelphia Police Commissioner Danielle Outlaw claimed the gas was used as a "last resort."

However, the Revolutionary Abolition Movement's Philadelphia branch tweeted that protesters received "no warning, no verbal commands, nothing" before being shot at and then gassed by police. The organization added, "We were cornered, completely trapped, and they were unleashing their arsenal on us. This wasn't about dispersing us. This was about making people suffer."

More like this
How Jess Moore Matthews is training the next generation of digital activists
By Vanessa Taylor
Supreme Court justices' political leanings: A guide to the 2021 court
By Vanessa Taylor
"She's gonna disappear": A GOP congressional candidate threatened to sic Russian hitmen on his opponent
By Rafi Schwartz
Stay up to date