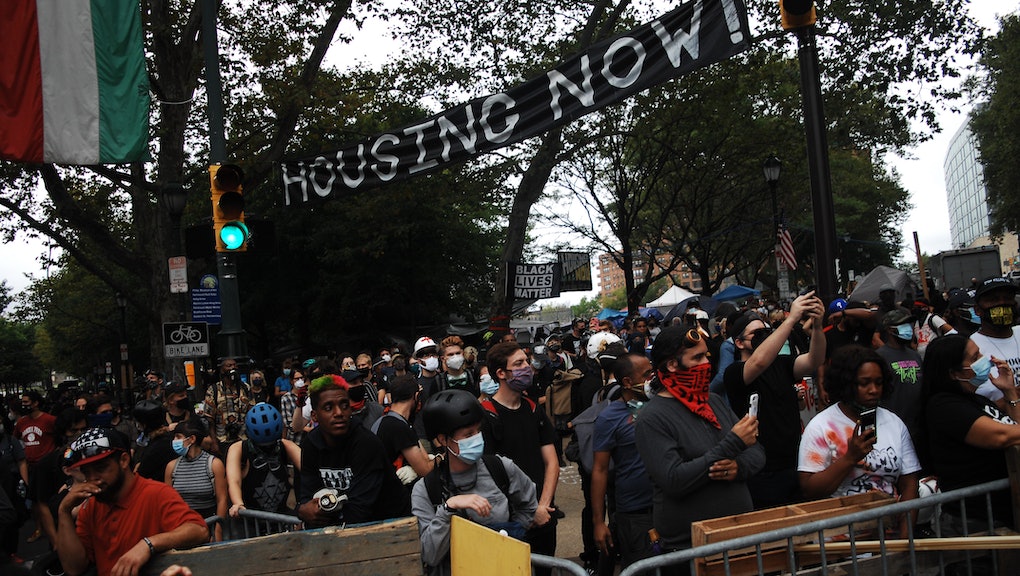 Housing activists protest a planned eviction of a homeless encampment in Philadelphia in September. [Photo by Cory Clark/NurPhoto via Getty Images]

Philadelphia Housing Action is reimagining the future of affordable housing

One of the pandemic’s most destabilizing long-term effects has been this year’s record-high unemployment rate. As the pandemic continues to take its toll on the economy, millions of working people have seen their hours suddenly dramatically cut, been furloughed indefinitely, or lost their jobs entirely.

The employment crisis has since matured into an eviction crisis, with murmurings of rent strikes and eviction moratoriums quickly gaining steam. COVID-19’s rapid spread has also jump-started urgent efforts to advocate more directly for homeless people around the country, as longtime tenant organizers and their allies welcome the renewed energy around the fight for housing justice.

Earlier this year, a notable housing justice win was achieved in Philadelphia, Pennsylvania, where a coalition of local community organizations — known collectively as Philadelphia Housing Action — had been pushing for the better part of a year to secure safe and affordable housing for unhoused people and low-income residents in the city. At the heart of Philadelphia Housing Action’s mission is the assertion that it is indeed possible to reorganize society in a way that ensures safe, affordable housing for every single person who wants it.

With this vision in mind, the collective created a thorough list of demands that take aim at government agencies and practices that they argue exacerbate homelessness and contribute to housing inequality in Philadelphia. By calling out the Philadelphia Housing Authority (PHA), the city’s public housing arm, alongside issues like gentrification, hyper-surveillance, harassment, and the criminalization of homeless people living with addiction, the group hopes to draw attention to the complicated latticework of social issues that make ending homelessness one of the city’s toughest challenges.

In September, after months of negotiations, the coalition announced a tentative agreement with the city, stating that they had secured 50 vacant properties to be transferred from the Philadelphia Housing Authority, to a community land trust. The trust would be controlled and managed by “local control committees,” determined in partnership with the homeless activists and protest organizers involved. A week later, the coalition successfully secured another nine properties for the land trust. At the time, PHA also announced a new pilot program called the “Working for Home Repair Training Program.” Through the program, people experiencing homelessness will gain employment doing renovation work on the vacant properties; the updated homes will then be added to the Philadelphia Housing Action’s expanding community land trust.

When Mic spoke to Sterling Johnson, a housing lawyer and organizer with Philadelphia Housing Action, it had been just days since the news broke of the initial tentative agreement. The coalition was busy juggling multiple media requests alongside more pressing responsibilities at the camps. Johnson paused the interview briefly at one point to handle an urgent issue having to do with porter potties at one of the encampments. When they returned, they mentioned they were heading into a meeting immediately after our phone call.

“I feel like we’re talking about houses, you know? Like, what houses, which ones, where — you know, all of that stuff,” said Johnson, commenting on the then-still developing negotiations. “That’s where we’re at. We’re still talking to them.”

Two weeks later, on Oct. 14, Philadelphia Housing Action announced that they had reached a much more definitive agreement with the city, laying the groundwork to establish a truly ambitious new approach to solving homelessness in cities across the U.S. In addition to finalizing the initial agreement to transfer 50 vacant properties, city officials also agreed to develop two “tiny house” style villages to provide housing for several dozen people, expand PHA’s Shared Housing Initiative program, and offer 50 new rapid rehousing opportunities through the city’s Office of Homeless Services, which provide selected individuals with “a security deposit, utility assistance, moving costs leasing assistance, and up to 24 months of rental assistance.”

Philadelphia Housing Action’s success represents a major turning point in the housing justice movement. Experts have called the coalition’s deal with the city an “unprecedented” win, but Johnson still regards the hard-won agreement with skepticism. For them, the fight for realizing true housing justice is a long one, with a robust history of activism paving the way and a vision for the future that involves the dismantling of oppressive government-sponsored organizations and agencies.

“The whole point of our protest was to make sure everybody had a house,” said Johnson in a statement after the deal was publicly announced. “And while we didn’t get everything we wanted, we did get a commitment for a significant number of housing units for a community land trust from the City and [Philadelphia Housing Authority] and expanded options for camp residents.” Philadelphia Housing Action’s Twitter account shared a similar sentiment, tweeting, “Some people may call this a victory but the fight is far from over.”

Organizers know there’s more work to be done, because they’ve been at this for years. This most recent win stems from a shift in the city’s treatment of its homeless population at the beginning of 2020, when Johnson says Philadelphia officials seemed to be cracking down on encampments. In response, a coalition of organizers and activists from Black and Brown Worker Cooperative, Workers Revolutionary Collective, and OccupyPHA started Philadelphia Housing Action and launched a direct action campaign to fight the targeted harassment of unhoused communities.

Over the past year, they’ve worked together to move several families into vacant homes in the area, helped to protect an existing homeless encampment located nearby the Philadelphia Housing Authority’s headquarters, and erected a second encampment as support and participation in the occupation grew.

Johnson says the coalition evolved organically out of a collective frustration over the city’s unwillingness to provide resources to support its homeless population. Because Philadelphia’s activist community already has deep roots and strong relationships, Johnson says that establishing the coalition wasn’t hard. Instead, the real challenge was figuring out the best way to apply pressure on the Philadelphia Housing Authority to keep the homeless encampments safe while extracting resources to reinvest in the community. Reaching an agreement with the city was only the first step. Now, the coalition has entered the next stage: keeping the city accountable to each and every portion of the agreement, while keeping a steady eye on the rest of their unmet demands.

“What we’ve seen is that the Housing Authority is an extension of the state and it — as well as city council people — are allowed to prime neighborhoods for gentrification,” Johnson tells Mic, offering a succinct explanation they attribute to longtime OccupyPHA organizer Jenn Bennetch. “[The Philadelphia Housing Authority is] priming neighborhoods for gentrification by taking scattered-site housing and selling them to private developers. ... Then they resell or they refurbish, and then they put someone with a higher income in there, and then it changes the neighborhood.”

For Johnson, PHA mimics many of the dehumanizing practices that gave rise to police brutality and criminalized people experiencing addiction, practicing sex work, or living with disabilities. Ultimately, the goal is to ensure that safe, low-cost housing is available via the land trust in perpetuity, rather than being eventually sold or redeveloped for profit “once the tax breaks run out” — a trend Johnson says is common for private developers more invested in increasing their profit margins than in actually providing housing to serve the city’s most vulnerable.

“It’s about land tenure. It’s about space. It’s about connecting people across the world — all these other spaces,” Johnson explains. “The [government] is so controlled by power and money and [it’s] impossible to get it to do what you want. So you have to make your own thing. and that’s what our communities have been doing forever.”

In a Democracy Now interview last month, Bennetch explained the significance of the campaign’s continued success. “Not just is it a win for us and not just is it a win even for the people in the encampments who will be able to move into homes, but this is also 50 units that would’ve been sold to developers and used to speed up the process of gentrification in our neighborhoods.”

For Johnson, Philadelphia Housing Action’s current campaign is just the latest iteration in a decades-long history of fighting for housing justice in Philadelphia. Part of the transformative power of the coalition’s vision is its willingness to create community alternatives and solutions that are meant to exist separate from government agencies, city oversight, or any police intervention. In that way, securing the physical properties themselves is only a portion of the battle. Philadelphia Housing Action is reaching a step further to insist on allowing those properties to exist free — or as free as possible — from the hyper-surveillance, criminalization, and economic burden that government agencies often impose on already marginalized members of society.

With any luck (and a good deal of organizing), the future of affordable housing in Philadelphia and the future of the movement for housing justice across the nation will ensure that every member of society not only has access to safe and secure housing, but can live there with dignity for as long as they need.

More like this
Universal basic income: Why doesn't the United States have it yet?
By Rafi Schwartz
Biden has hit his 100th day in office. So what's next?
By Rafi Schwartz
"Radical love in action": How organizers supported vulnerable Muslim communities during Ramadan
By Vanessa Taylor
Stay up to date