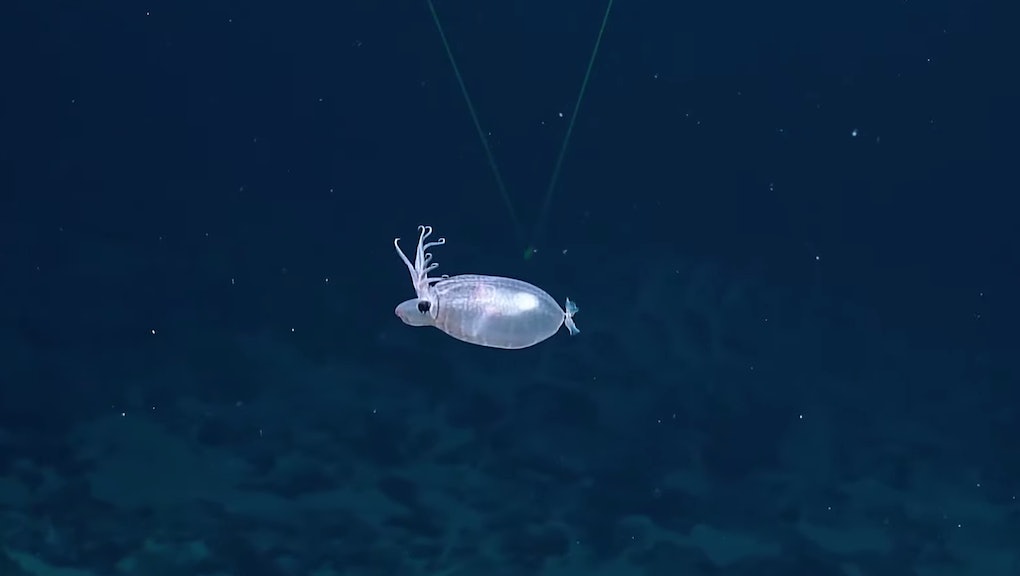 There are untold wonders in the ocean, with many of them completely unknown to man. In fact, we're still seeing new discoveries of species throughout the world, as well as rare sightings of creatures we previously hadn't had a good look at before — like a starfish that resembled ravioli more than anything that makes its home underwater. But animals that resemble pasta aren't all that lie below — in a rare event, what's known as a "piglet squid" was caught on video.

We're able to study these types of creatures more thoroughly thanks to the work of research vessels like the Nautilus, which is funded by the Ocean Exploration Trust, and recently came across a rather strange-looking squid in the central Pacific Ocean. The Nautilus team was able to capture footage of a type of see-through squid called the "piglet squid," or Helicocranchia pfefferi, to be precise. Just look a little closer – it resembles a stout little pig.

The Exploration Vessel Nautilus is equipped with state of the art technology and a selection of other systems that aid it in plunging the far reaches of the ocean. It utilizes remotely operated vehicles (ROVs), high-res seafloor mapping, and real-time satellite data transmission to help fulfill its purpose. It was able to leverage this tech to make the journey about 4,544 feet below the surface of the Pacific Ocean, near Palmyra Atoll. There, they came upon this strange little creature.

The squid, according to the Nautilus vessel on board during the discovery, noted that it looked like it had "hair" and "lipstick" as well as a "weird reindeer head." They weren't quite sure what to make of it at first (who would be?) because it's not every day these little guys are captured on film.

While the piglet squid was actually discovered in 1907 and isn't a new species, this was one of the rarer, up-close looks at the ocean-dweller. It isn't often that researchers are able to photograph it, and while it wasn't sporting a big grin like this piglet squid from 2009, it certainly painted a majestic and unique picture for Nautilus staff to observe.

As far as the squid, it's only about a few centimeters across and can be found in all oceans in deeper water, around 100 meters down. It tends to be difficult to locate because of its tiny size. Perhaps surprisingly for an ocean creature, it's not proficient at swimming, and can fill up with water, which it releases from the structure on the top of its head. Since it remains full of water, how does it stay afloat? It retains buoyancy from the ammonium ions flowing throughout its bodily fluids. It's quite the bizarre little squid.

One of the most striking things about the piglet squid is that it's entirely clear. You can even see its internal organs, which lends a bit of an otherworldly appearance to an already strange-looking deep-sea dweller. But as adorable as it is, this is one fairly rare glimpse of a creature we simply won't be seeing much of. With that said, this find was certainly a notable one. What will research vessels uncover next? The ocean is dense, wide, and unpredictable. Who knows what's out there?

More like this
The ocean is about to swallow a climate research facility, which feels fitting
By AJ Dellinger
The U.S. is spending millions to develop a nuke-powered spaceship
By AJ Dellinger
What cities will be most affected by climate change?
By Vanessa Taylor
Stay up to date