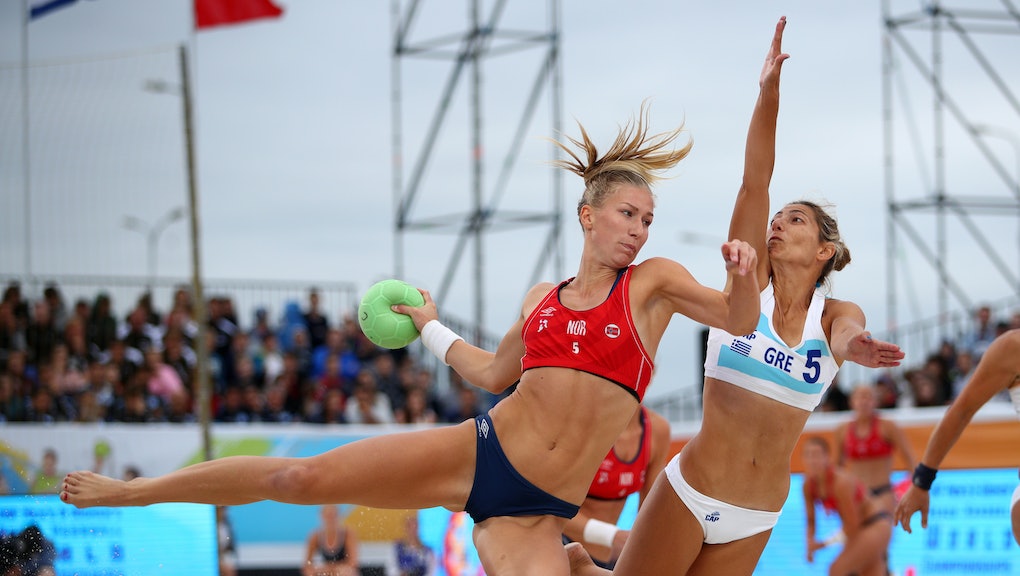 Not even the International Handball Federation knows why female athletes have to wear bikini bottoms, while men are allowed to compete in shorts. "We’re looking into it internally," Jessica Rockstroh, a spokesperson for the organization, told the New York Times. The sides of the women's swimsuits have to be less than four inches thick, while male players can wear shorts as long as four inches above the knee, as long as they're "not too baggy." Uhhh, we're guessing the reason for this disparity is bad, old-fashioned sexism.

When you compare the uniforms worn by male and female athletes side by side, it's shocking how covered-up the dudes look versus how skimpily dressed their counterparts appear. Norway's women's beach handball team protested the inequity by wearing shorts during their bronze medal match against Spain at the European Beach Handball Championships on July 18. As punishment, the players were fined 150 euros each, for a total of €1,500 ($1,771.25 USD). They've lobbied against the bikini requirement since 2006. "Nothing has happened," said Kare Geir Lio, head of the Norwegian Handball Federation, who noted his organization would pay the fine.

Inspired by the tenacity of the Norwegian women, however, pop singer Pink offered to foot the bill herself. "I’m VERY proud of the Norwegian female beach handball team FOR PROTESTING THE VERY SEXIST RULES ABOUT THEIR 'uniform,'" the musician tweeted. "The European handball federation SHOULD BE FINED FOR SEXISM. Good on ya, ladies. I’ll be happy to pay your fines for you. Keep it up."

It's hard for female athletes to avoid criticism no matter how they dress. "I don’t see why we can’t play in shorts," Norwegian player Martine Welfler told the Times. "With so much body shaming and stuff like that these days, you should be able to wear a little bit more when you play." They're punished for rebuking sexualized uniforms, yet when women choose not to cover up, they're shamed for that choice, too.

During the English track championships, Paralympian sprinter and long-jumper Olivia Breen said she was told by an official that her running briefs were "too revealing" and inappropriate. "My first response was 'are you joking?'" she told ESPN. "This is so wrong. We’re not living in the 18th century. Life has moved on." Breen noted her attire was chosen with performance in mind, not modesty. "When you are competing, you want to feel as light as possible to make you perform better," she told CNN.

Similarly, when Serena Williams wore a full-length black catsuit — custom designed by Nike to prevent blood clots like the one that nearly killed her after the birth of her daughter — at the 2018 French Open, officials called her "disrespectful." The tennis star said the suit made her feel like a superhero, but those in charge weren't amused. "One must respect the game and the place," complained Bernard Giudicelli, president of the French Tennis Federation. "I think that sometimes we’ve gone too far." In direct response to Williams' catsuit, the French Open changed its dress code to prohibit similar attire in the future.

The rules and regulations around athlete attire are nonsensical and hypocritical. They should be allowed to wear whatever supports their performance in their chosen sport. Like, draw the line at a high-jumper putting springs on their shoes, as one random and unlikely example. In seriousness, it's long past time to own up to what regulating women's attire is really about: control.

More like this
Turns out "one size fits most" is the least bad thing about Brandy Melville
By Kara Weisenstein
How many times must victims relive their trauma in the Larry Nassar case?
By Chloe Stillwell
Colin Kaepernick's new Netflix documentary highlights the man behind the icon
By Keith Nelson Jr.
Stay up to date