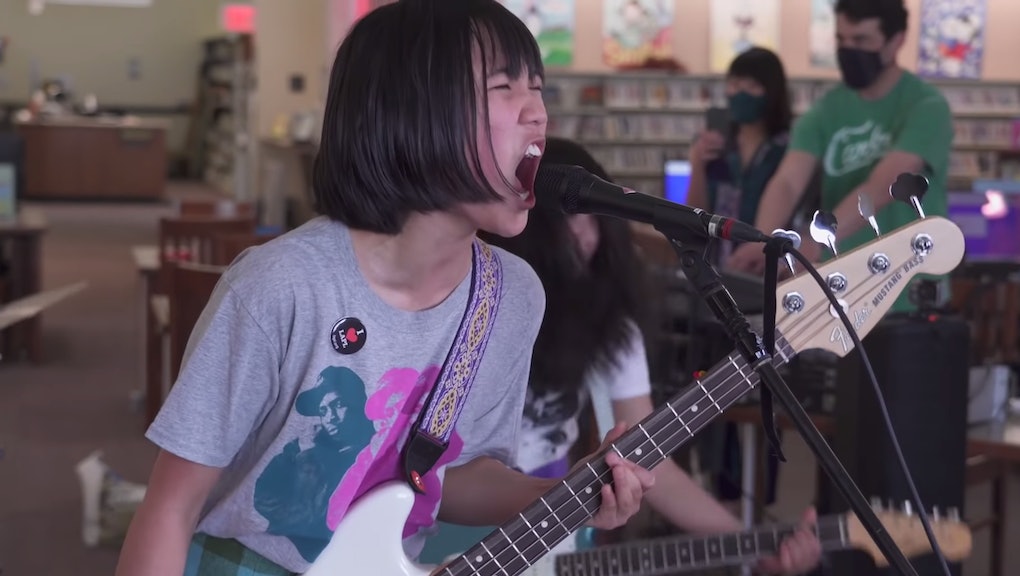 You shouldn't mess with the Linda Lindas. The all-female punk band, whose members range in age from 10 to 16, isn't afraid to put mean people on blast with their music. That's the story behind their viral hit, "Racist, Sexist Boy," a riot grrrl-inspired stand against anti-Asian racism that enchanted the internet last week.

On Thursday, the Los Angeles Public Library shared a clip of the Linda Lindas performing as part of its American Asian and Pacific Islander Heritage Month programming, and "Racist, Sexist Boy" became an overnight hit. Ten-year-old drummer Mila detailed the encounter with a classmate that inspired the song: "A little while before we went into lockdown, a boy in my class came up to me and said that his dad told him to stay away from Chinese people," she said during the library set. "After I told him that I was Chinese, he backed away from me."

"It was my first experience of racism, and I didn’t really know how to respond," Mila told The Guardian. She and 13-year-old bassist Eloise collaborated on channeling their sadness and rage into song. "I hope the song empowers people who have been oppressed," Eloise told The Guardian. "The song lets people know that they are not alone," Mila added, and Eloise said: "It’s good because I get to scream a lot in it — all of the anger that builds up, it’s good to let it out. It’s really fun to perform."

The Linda Lindas don't know if the boy they wrote "Racist, Sexist Boy" about has heard the song, but they certainly got the last word. "Of all the songs that we’ve written, it’s the most hard hitting,” 14-year-old guitarist Lucia told the Los Angeles Times. "It’s very tough compared to what we usually write, and it had to be that way. If it wasn’t that way, it probably wouldn’t have had much of an impact."

The world will be seeing a lot more of these young punks. According to Variety, the band just signed with Epitaph Records, the legendary label founded in 1980 by Bad Religion guitarist Brett Gurewitz. And don't you dare call The Linda Lindas "cute" or assume they're one-hit wonders: the band has been quietly impressing music legends for years.

Kathleen Hanna was so blown away by them, she invited The Linda Lindas to open for Bikini Kill during the band's 2019 reunion tour. "Kathleen took a chance on us. She didn’t have to do that," Lucia said. "She just emailed us and invited us to open for her at the Hollywood Palladium. People like to talk down to us. But Bikini Kill treated us like adults." Hollywood came calling, too. The Linda Lindas played the house band on Amy Poehler's Netflix movie Moxie and wrote an original song for the The Claudia Kishi Club, a documentary about Netflix's series The Baby-Sitters Club.

Only the eldest members of the band are on social media, so the impact of their virality hasn't totally sunk in yet. "It’s kind of weird because we’re still at home in our pajamas. Nothing really has changed yet; it’s not like we’re going out and it’s like, 'Oh my God, it’s the Linda Lindas,'" Lucia said. "But, like, yesterday my whole feed was just about us, and I was like, 'Whoa, this is crazy.' I keep getting phone calls and texts from people that I haven’t talked to in years that I would never think would know about the band."

The band's most senior member, 16-year-old guitarist Bela, got a taste of what fame feels like: "When I walked into school to pick up my yearbook, people were cheering," she told The Guardian. But being a rockstar and a junior in high school presents challenges, too: "I still have one project that I have not finished, and I’m like, do I do it? Do I not? I’m really grateful this is happening, but I kinda wished it happened next week," Bela said.

More like this
Billie Eilish doesn't have to answer to us about who she loves
By Kara Weisenstein
Willow Smith's latest interview proves "white people's music" doesn't exist, but racism does
By Keith Nelson Jr.
What Carl Nassib's announcement that he's gay means for pro sports
By Kara Weisenstein
Stay up to date