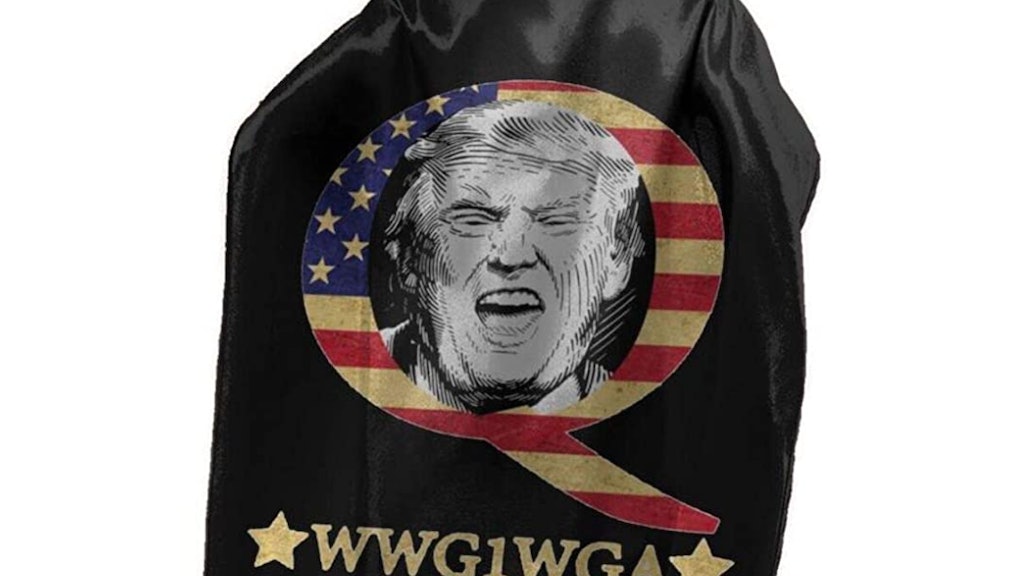 Please don't dress your kid as a Qanon follower this Halloween

Halloween costumes are supposed to be scary, but nothing is more frightening than the collection of kid's Qanon getups that are currently being sold on Amazon. Items emblazoned with symbols from the far-right conspiracy-theory group like a cape with a large “Q” on fire and a cloak with Trump’s face and it’s motto WWG1WGA (which stand for “Where We Go One, We Go All”) across the back. There’s also a strange assortment of Qanon witch hats, one printed with an American flag and a large “Qanon Eagle.”

"Halloween ideas? How about wrapping your child in a cloak of paranoia, fear, and dissociative disorders?" one Twitter user wrote about the bizarre kid's costumes.

Retailers like Etsy have recently banned Qanon merchandise, and major sites like Facebook, YouTube and Tiktok have crackdown on content related to the collective. Even though the group, which believes President Donald Trump is secretly fighting a "deep state" cabal of pedophiles has been linked to violent crimes and is considered a domestic terrorism threat by the FBI, it’s unlikely Amazon will follow in ridding it’s platform of Qanon merch. Business Insider found earlier this month that Amazon was selling over 1,000 items linked to the movement that included everything from T-shirts to books.

Qanon's wild theories have been gaining popularity amongst Trump supporters, who have helped make the fringe group mainstream. But during last week's town hall, Donald Trump denied knowing anything about Qanon despite recently retweeting one of its theories that Joe Biden plotted the murder of Seal Team Six members.

Fortunately some Amazon users are leaving helpful feedback about the costumes like this one for the "Big Q Witchset:" "Use your child as a prop to project your cray to the world this Halloween 2020 season! Your kid's future psychotherapist will thank you."

More like this
Live from New York: Revisiting the totally bonkers era of post-9/11 'SNL'
By Rafi Schwartz
The 8 best reality shows you're not watching, but should be
By Brandon Yu
Steve from 'Blue's Clues' gave us the closure we didn't know we needed
By Kara Weisenstein
Stay up to date