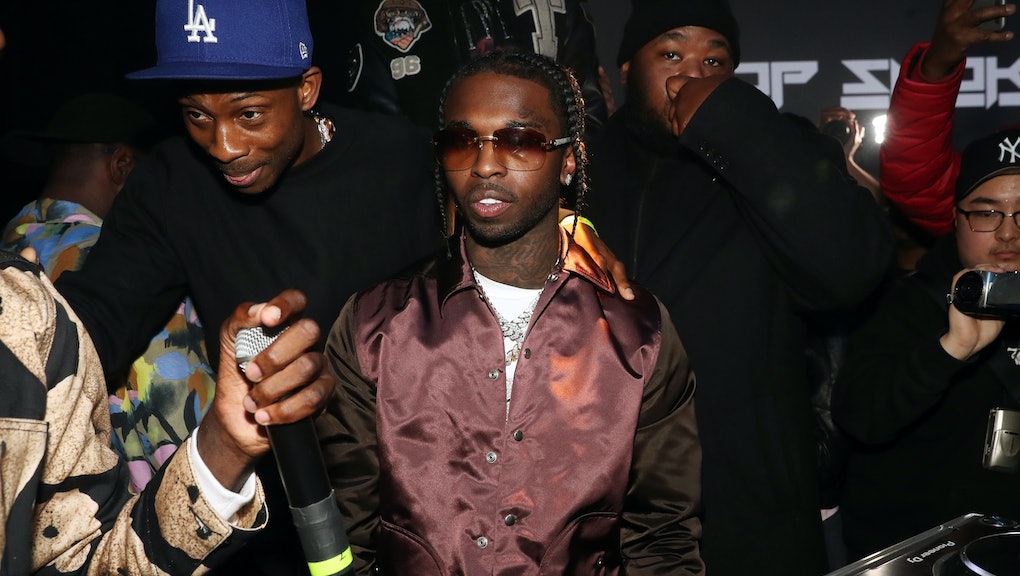 Death can be a prison for the dead trapped in the vision of the living. Posthumous albums are inherently, at best, interpretations of the fallen artist's intentions molded by how those who are still alive feel the music would fit today. The news of a new posthumous Pop Smoke album arriving a year after his debut album was a major surprise: a mix of elation over new songs from the Brooklyn drill emperor and skeptical trepidation over how an entirely new album could be made in such a short period of time.

The 56 minutes of Faith unsuccessfully try to stretch a career cut too short into a future he didn't plan for. Following Pop's death, his manager Steven Victor told Complex that 80% of the songs Pop had in the archives were finished how Pop wanted them, and executive producer 50 Cent estimated there were between 50 and 60 songs they had to choose from when putting together his debut album Shoot For The Stars, Aim For The Moon. That would mean between 40-50 songs were finished products — and 34 were released just on the Shoot For The Moon deluxe version. That would leave no more than 16 songs remaining, and I highly doubt they would use every last Pop Smoke session for only two records. That leads to the most glaring problem with Faith and posthumous albums, in general: it sounds like a collection of polished demos.

While Faith's predecessor Shoot For The Moon, Aim For The Stars, is also a posthumous album released less than five months after its creator's February 2020 murder, it sounded more like a Pop Smoke album. For starters, there are only four solo songs and an interlude on Faith, compared to eight on his debut. On top of that, when Pop does have the song to himself, he rarely raps for more than 90 seconds, a trend that permeates nearly every song of the 20-track album which clocks in at under 60 minutes of music. It's clear there was not much Pop music to make a full-length album anchored largely by the Canarsie icon, resulting in Pop sounding like a guest on his own album.

For Shoot For The Moon, Aim For The Stars, Swae Lee admitted to Complex he and Pop had intentions on working together but never formally collaborated in the studio. Their underwhelming "Creatures" collaboration from the project was created after merging two separate solo songs from Swae and Pop into one. Their latest song "Genius" suffers from the same disjointed feel of "Creatures," with Swae's soft, high-pitched vocals sounding as if he's trying to sound intimidating after stumbling down the wrong dark alley. Unlike songs such as last year's "West Coast Shit," where Tyga says Pop personally FaceTime'd him to get him on the record, or "Aim For The Moon" which he worked on together with Quavo, Faith is full of songs that feel more like Pop tributes than collaborations; celebrating the spirit of his music rather than his own talent.

Outsiders looking in on the making of Faith with a critical eye have to accept the fact that people who worked on the posthumous album knew Pop better than they do. Before his death, Victor was grooming Pop for longevity and remembers Pop telling him, “I got all types of records. I want to make global music. I don’t want to just be a local artist." That would explain how the Dua Lipa-featured "Demeanor" made it on the album. The song is a clear attempt at expanding Pop's star beyond the streets and into the pop realm, but his dungeon dark vocals over drums soft enough to make Maroon 5 sound like Metallica garner mixed results. Just because Pop wanted to branch out into different genres doesn't mean he would've did it in that way. Death robbed Pop the chance of showing us the growth he had in store and it's incredibly hard to manifest intentions without the source's involvement.

That brings us to one of the biggest gripes with the album: the narrative. Pop was a prototypical gangster rapper with a proclivity for leveraging the weight of his gruff voice to turn already threatening depictions of gun violence into nightmares listeners wanted to repeat. So, it's nearly impossible to avoid having gun talk on an album from a victim of such violence. But, the song "Coupe" was a jarring error of judgement that hurt the creditability of the album as a true manifestation of Pop's intentions. On the Rico Beats-produced bop, Pop raps, "Don't run in my crib, I'll put guns to your head" before a slight silence in the music to signify the profundity of the line. For an album which included a eulogizing intro from his mother and reflections on the tragedy of his death from New York City radio legend Angie Martinez, a lyric describing a scene similar to how he was murdered appears to have been included as poignant irony but came off tasteless.

On the day the album was released, Pop Smoke's best friend Mike Dee, whom was with Pop in L.A. hours before Pop's death, aired his grievances with the album on his Instagram page. He claims to have known nothing about the album until the internet knew and implies Pop wouldn't want his album to come out how it did. It's impossible to know which parts of Faith the late rapper would've approved, but it's clear this album was made more from the thoughts of the living trying to keep the dead alive.

More like this
Lil Nas X's 'baby registry' proves trolling can be done with heart
By Brandon Yu
The 2021 VMAs honored its past because it doesn't really have much of a future
By Brandon Yu
Lil Nas X delivered his baby, 'Montero,' along with an ill-fated love story
By Kara Weisenstein
Stay up to date