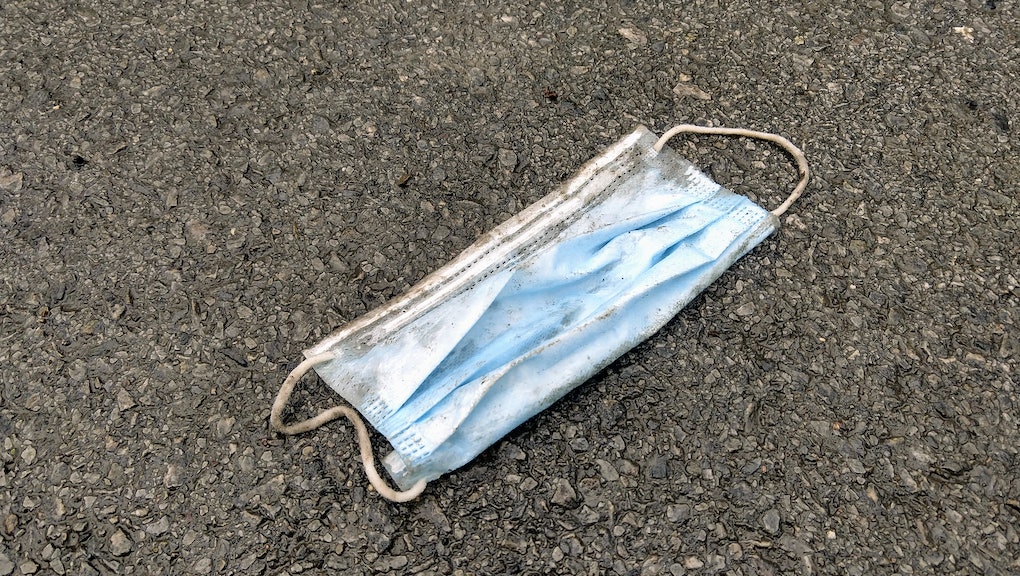 Personal protective equipment like masks, gloves, and face shields have kept humans safe through the coronavirus pandemic. However, the items are having the opposite effect on the planet. A new study published Tuesday by Ocean Conservancy, a nonprofit environmental advocacy group, found more than 100,000 pieces of PPE littered across land and water over the last six months — and the organization warns that this is "just the tip of the iceberg."

Ocean Conservancy operates a massive network of coastal clean-up efforts, driven by partners and volunteers who are on the front lines picking up discarded trash to minimize its damage to ecosystems. Over the second half of 2020, those clean-up crews reported collecting 107,219 pieces of PPE. Those eyes on the front line have also reported a significant increase in the amount of discarded PPE they see, with 51% reporting that they see PPE items like masks and gloves every single day, and 94% reporting that they have picked up at least some PPE during clean-up efforts.

By far, the most commonly found piece of trashed PPE were masks, which accounted for 81% of all PPE waste. Ocean Conservancy observers reported that 10% of the waste was discarded gloves, and 6% was sanitizing wipes. The vast majority of this PPE refuge was designed to be single-use.

While more than 100,000 individual pieces of PPE left on beaches, in green space, and even in waterways seems like a lot, the report is almost certainly underselling the problem. Nicholas Mallos, senior director of Ocean Conservancy’s Trash Free Seas program, tells Mic that the true amount of PPE pollution could be more than 10 times as much. "Because of the pandemic, this year’s International Coastal Cleanup turnout was significantly lower than usual, with about a third or less of typical participation numbers. With fewer people cleaning up fewer beaches and waterways, of course the overall item count will be lower across the board.” Mallos estimates that if the clean-up efforts saw the same turnout that they attract in an average year, "we’d expect to have seen PPE numbering in the low millions and reaching the top five or 10 items list." Not great.

The majority of this waste was found on land, but 37% of Ocean Conservancy's clean-up crews reported finding trashed PPE in waterways. This has the potential to be extremely damaging to lakes, oceans, and other watery ecosystems. "The threat that PPE pollution poses on land multiplies when it reaches the ocean," Mallos says, noting that masks and gloves are flexible plastics, which are among the deadliest types of plastic pollution. A scientific review of nearly 80 studies published last year in the journal Conservation Letters found that flexible plastics have been a cause of death for whales, dolphins, turtles, seabirds, and other wildlife. Because of their malleable shape, they can snag on underwater structures and get stuck at all depths, making it possible for many different types of sea creatures to come into contact with them.

Mallos reports that volunteers and clean-up crews have seen animals struggling with discarded PPE firsthand. "We have seen reports of seabirds and other wildlife choking on PPE or entangled in the ear loops of face masks," he tells Mic. He also warns that if not discarded properly, PPE presents a long-term threat to wildlife: "Because disposable PPE are made of plastics, they will persist indefinitely in the marine environment, never breaking down, but rather breaking up into smaller and smaller microplastics or microfibers." A study published earlier this year in the journal Environmental Advances found that a single disposable face mask can release up to 170,000 microfibers per day in a marine environment. These microfibers, tiny particles of plastic that break off but take centuries to fully break down, have been found to endanger all forms of sea life and are incredibly difficult — though not impossible — to remove.

Unfortunately, there is a degree of inevitability when it comes to PPE waste. From the very start of the pandemic, single-use plastic was clearly going to cause a problem for the environment. Hospitals reliant on PPE were discarding it quickly for fear of contamination and surface spread, creating massive amounts of medical waste. This trickled down to individuals, as concerns about how the virus spread led to temporary bans on reusable bags and kept people from buying goods that were uncovered or not packaged. The plastics industry saw a huge boost over the course of the pandemic, and much of that was driven by demand for PPE.

The problem is that little thought was put into how to manage the disposal of those goods. We were already pretty bad at managing plastic waste, and the huge influx of single-use PPE only exacerbated the problem. "PPE has been absolutely critical in keeping people safe and healthy during this pandemic, and it’s going to be with us for the foreseeable future," Mallos says. That means we're going to need to be more conscious about how we discard it if we want to prevent the waste from piling up. Mallos recommends that individuals dispose of PPE in covered trash bins. For masks in particular, people should cut the ear loops to make sure they do not pose as much of a risk to wildlife if they do make their way into the ocean. "In practice, this might mean waiting until you’re home to dispose of any PPE, or choosing reusable masks when local health guidelines say it is safe to do so."

Of course, while individuals can minimize their own damage, making real progress will require a large-scale effort from government bodies. "Better collective management of PPE waste means better collective management of all plastic waste, at every level," Mallos says, noting that it will start with banning all of the single-use plastics that we've gotten too familiar with: plastic bags, foam food containers, and straws. "State and local governments need to make sure municipal recycling and waste collection programs are properly funded," Mallos says. "At the federal level, we need mandated recycled content minimums in the plastic items we do produce, and to make sure that plastic products are actually recyclable right here in the U.S."

Additionally, Mallos notes that it's time to start holding the companies that manufacture all of these plastic goods accountable for making sure they are properly discarded. There is a cost to the planet associated with our reliance on this waste — even if it’s essential — and the Earth can no longer afford to foot the bill for all of it.

This article was originally published on March 30, 2021