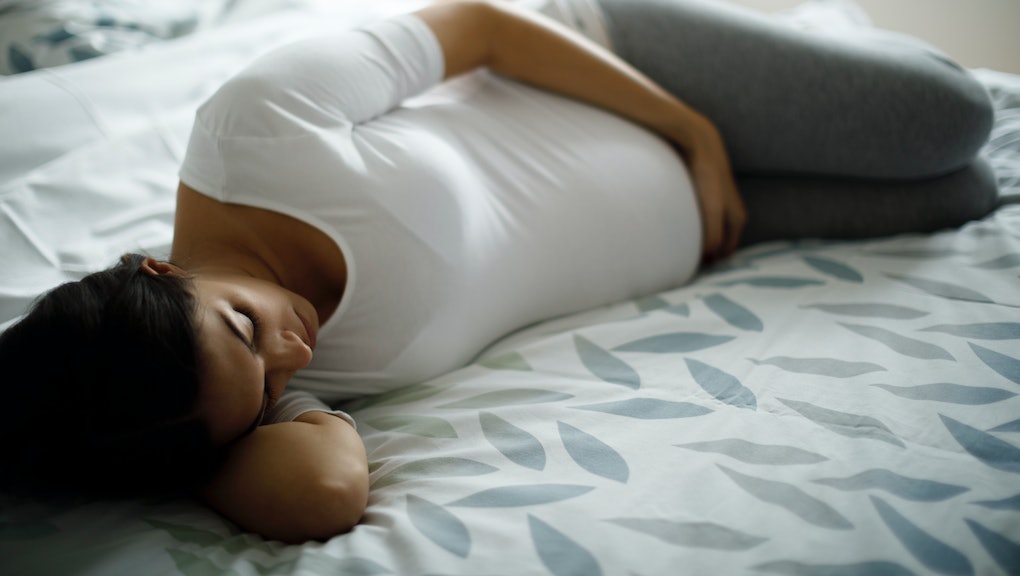 Pregnant Latinx women are contracting COVID-19 at an alarming rate

Although the pandemic has touched all of our lives in one way or another, Black and Latinx communities in particular have borne the brunt of it, possibly even more so than previously thought. Pregnant Latinx women make up an alarming number of COVID-19 cases, the Washington Post reports, which at least one expert believes might indicate that we’ve underestimated the disease’s toll on the Latinx community as a whole.

Out of 14,111 pregnant women diagnosed with COVID-19, 6,447 — almost half — were Latinx, per data gathered by the CDC from January 22 to August 11, according the Post. And pregnant Black and Latinx women in Philadelphia have a fivefold higher likelihood of exposure to the novel coronavirus than their Asian and white counterparts, based on data from a University of Pennsylvania study.

Exactly how COVID-19 affects pregnant women remains unclear, though, due to limited research on the disease in this population, the Post notes. A CDC report associated pregnancy with a higher risk of landing in the ICU or getting hooked up to a ventilator, but not of dying. Again, the Black and Latinx women seemed to contract COVID-19 at disproportionate rates.

Statistics on pregnant Latinx women with COVID-19 could reflect the true disease burden within their communities, Tollie Elliot, chief medical officer at Mary’s Center, a community health clinic nonprofit in the Washington, DC region, told the Post. Basically, they may be a canary in the coal mine for the Latinx community more broadly, which has had poor access to testing. Since pregnant women on average visit the doctor more often than the general population, any COVID-19 symptoms they might have are less likely to go unnoticed by a clinician, Elliot explained.

In Montgomery County, a suburb of DC, Latinx residents comprised 20% of the population yet made up 73% of new COVID-19 cases in June, according to the Post. Disproportionate rates of infection among Latinxs have been reported elsewhere in the country, too.

These sobering numbers make sense, given that Latinx people comprise an outsized number of those working in occupations deemed essential during pandemic, such as caregiving and construction, the Post reports. And they’re more likely to share their households with several occupants, often spanning generations, creating an ideal environment for COVID-19 transmission. Oftentimes, multiple generations in a single family have contracted the disease, not only endangering pregnant family members but preventing their loved ones from providing them with needed support.

Even if pregnant women with COVID-19 survive, they could experience terrible side effects, including postpartum depression. “When you have COVID-19, it’s sustained high-intensity trauma, especially if you’re pregnant,” Elliot told the Post. “The stress, the anxiety — it’s significant.”

The Post highlighted the story of Ana, a Salvadoran woman with chronic hypertension and pre-eclampsia who experienced complications from COVID-19. After the doctors induced labor, she entered respiratory distress and needed a ventilator, while her premature twin daughters went into the neonatal intensive care unit. Eventually, doctors had to put Ana on an extracorporeal membrane oxygenation machine (ECMO), which routed her blood into an artificial lung and returned it, oxygenated, to her body.

She was discharged within a week, but she and her partner, Alfredo, faced looming financial troubles. They were already barely making enough money to cover their apartment rent and send money to Ana’s mother, who’s struggling with health issues in El Salvador. Now, COVID-19 has left Ana too weak to take care for her twins and older children. The café where Alfredo worked is closed. Neither he nor Ana qualify for the Special Supplemental Nutritional Program for Women, Infants and Children. Ana’s sister and a local church are keeping them afloat, and her health insurance may not cover the steep hospital bills from her COVID-19 care.

Worse still, Ana’s twins were struggling to breathe and had to be given oxygen at a local hospital earlier this month. Thankfully, they tested negative for COVID-19. Doctors said they had the common cold, exacerbated by their fragile lungs, a result of their pre-term birth — but they advised isolating the twins indoors for 20 days, since they could still contract the disease.

Indeed, the pandemic has made the situation of immigrant families under the Trump administration, like Ana’s, even more tenuous, Victoria White, a prenatal care provider at La Clínica del Pueblo, a community clinic network in the DC region, told the Post. On August 5, a federal court sided with the administration’s “public charge” rule, which would make it harder for immigrants to obtain permanent residency if they’ve received used food stamps, Medicaid, or other public benefits. A long history of systemic racism has already caused the pandemic to hit Latinx communities especially hard — it’s not unreasonable to expect an administration that has been openly hostile to immigrants and BIPOC to only worsen its impact.