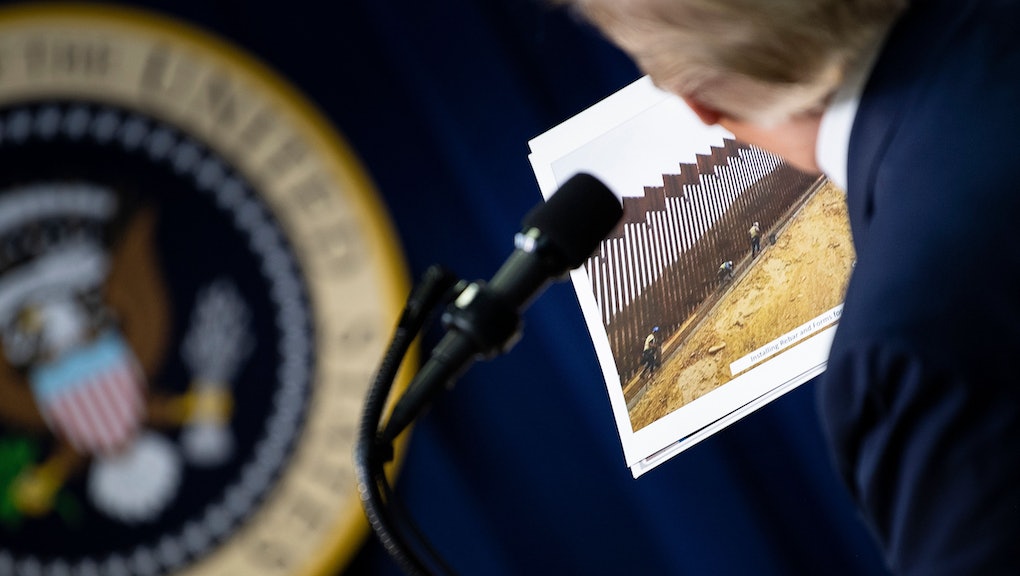 For months now, President Trump has demanded that his morally abhorrent, astronomically expensive, dubiously effective border wall between the United States and Mexico be painted black — a color, he insists, that will not only make his barrier scarier, but also hotter to the touch in order to discourage climbers from scaling the structure.

Now it appears the president is poised to get his wish. The cost: an astonishing $1.3 billion for just 42 miles of wall.

According to the Arizona Daily Star, the Army Corps of Engineers has awarded the North Dakota-based Fisher Sand and Gravel construction company a $1.28 billion contract to build just over 40 miles of black-painted fence through some of southern Arizona's roughest terrain. The contract, officially closed on May 6, is the largest wall construction agreement to date.

This is not, in fact, the first border wall contract with the Army Corps of Engineers for Tommy Fisher, head of the company. His first, a $400 million contract, is currently under audit by the Department of Defense's inspector general, after Democratic Rep. Bennie Thompson (Miss.), who chairs the House Homeland Security Committee, raised concerns that it had been awarded as a result of "inappropriate influence."

Fisher has waged an intense battle for the president's attention of late, with multiple appearances on cable news, thousands spent in lobbying and GOP donations, and efforts to ingratiate himself with many in Trump's inner circle, per The Washington Post. In a statement to the Post, Thompson condemned Fisher's latest contract — news of which wasn't public before it was revealed by the Arizona Daily Star.

"It speaks volumes to the administration’s lack of transparency that they didn’t announce this award — the largest ever — and we continue to learn about contracts to companies without a proven track record from the media," Thompson said. "Given the coronavirus pandemic and the ongoing investigation into Fisher, the administration should pause construction and contracting decisions until the investigation has concluded favorably and it is safe to resume nonessential construction projects."

That "nonessential construction" includes an estimated $1.2 million price increase per mile in order to fulfill the president's demand that the wall be painted black — a process that will reportedly boost long term upkeep costs, but will retain less than just 10% more heat than if it were left unpainted.

According to the Customs and Border Protection website, just 187 miles of Trump's barrier wall have been constructed to date.

More like this
Oops, the Arizona recount the MAGA crew demanded actually took votes away from Trump
By Rafi Schwartz
Tucker Carlson is now spouting the talking points of racist mass murderers
By Rafi Schwartz
It appears once again that the Democrats are willing to tank their whole agenda because of "rules"
By Rafi Schwartz
Stay up to date