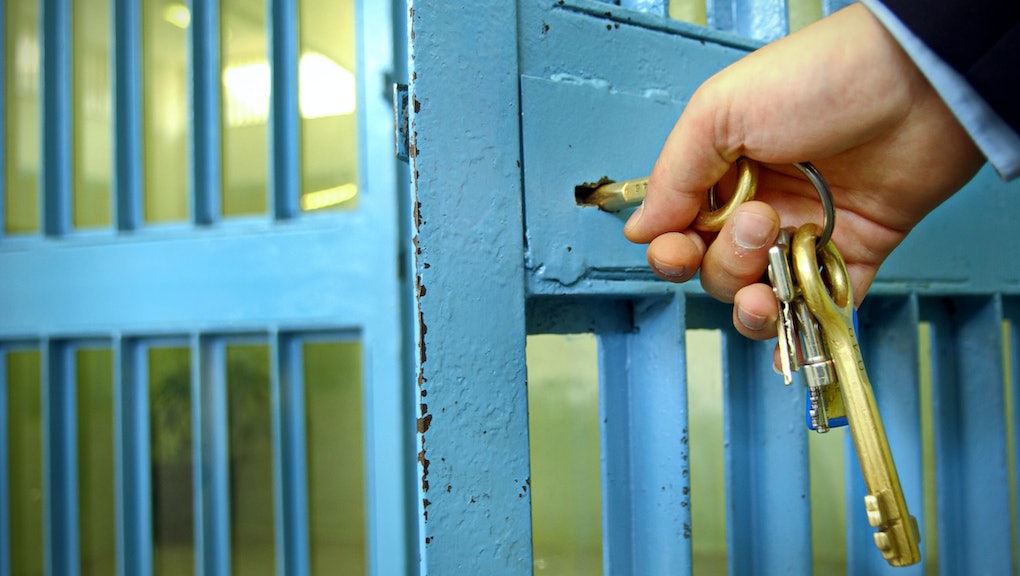 Targeting immigrants through federal agencies like Immigration and Customs Enforcement (ICE) has become a defining factor of the Trump administration. The news of children dying, sexual assault, and other forms of abuse have driven advocates to organize against detention facilities, including partnerships with private companies. Now, a private prison firm is suing California over a bill that banned private, for-profit prisons in the state.

In October, California Gov. Gavin Newsom (D) signed Assembly Bill 32. Set to go into effect on Jan. 1, the law bans entering into or renewing contracts with private, for-profit prison companies. This not only includes general prisons, but detention facilities in the state, too.

As a result of AB 32's passing, the state is being sued by the GEO Group, Inc. The lawsuit, which names both Newsom and California Attorney General Xavier Becerra, claims that the law is unconstitutional because it encroaches on the federal government.

"There is a longstanding and clear-cut constitutional principle that individual states cannot regulate the actions and activities of the federal government," the company said, according to The Associated Press.

In response to the GEO Group's lawsuit, California Immigrant Youth Justice Alliance (CIYJA) tweeted a photoset stating that ICE "should not intervene in California's democratic process."

The GEO Group, a Florida-based company, is obviously motivated to sue because it does have money at stake when California's law goes into effect. Right now, California has four ICE detention centers and all of them are run by private firms.

Recently, the GEO Group itself received multibillion-dollar contracts to continue operating two of those detention facilities. The facilities, in Adelanto and Bakersfield, have the capacity for 2,690 and 1,800 beds respectively.

Reports of horrid conditions in ICE's detention facilities are plentiful and predate the Trump administration. In 2018, The Intercept reported there were 1,224 incidents of sexual abuse against detainees from 2010 to Sept. 2017, with only 43 cases ever investigated.

However, the current administration is responsible for a lot of harm. In June, the American Civil Liberties Union said at least seven children have died in custody or after being detained by federal agencies at the border. Then, in October, reports leaked regarding abuse at privately-run detention centers in Louisiana.

"Given the alarming rise of deaths and mistreatment migrants face across the nation at the hands of companies such as GEO Group of CoreCivic, immigrant rights advocates in the state of California worked tirelessly to pass a policy that would reflect California's commitment to protect all who call it home," CIYJA wrote.

Private companies, where people blatantly profit off the incarceration of marginalized populations, are one part of the issue with prisons and detention facilities. Laws like those in California clearly won't go unchallenged, but they are important to show that not only will abuse no longer be tolerated, but private companies will also no longer be allowed to profit from it.

More like this
Biden has hit his 100th day in office. So what's next?
By Rafi Schwartz
The CDC's eviction freeze has been unfrozen by a federal judge
By Rafi Schwartz
This very bad Florida voting bill furthers the GOP push to disenfranchise voters
By Vanessa Taylor
Stay up to date