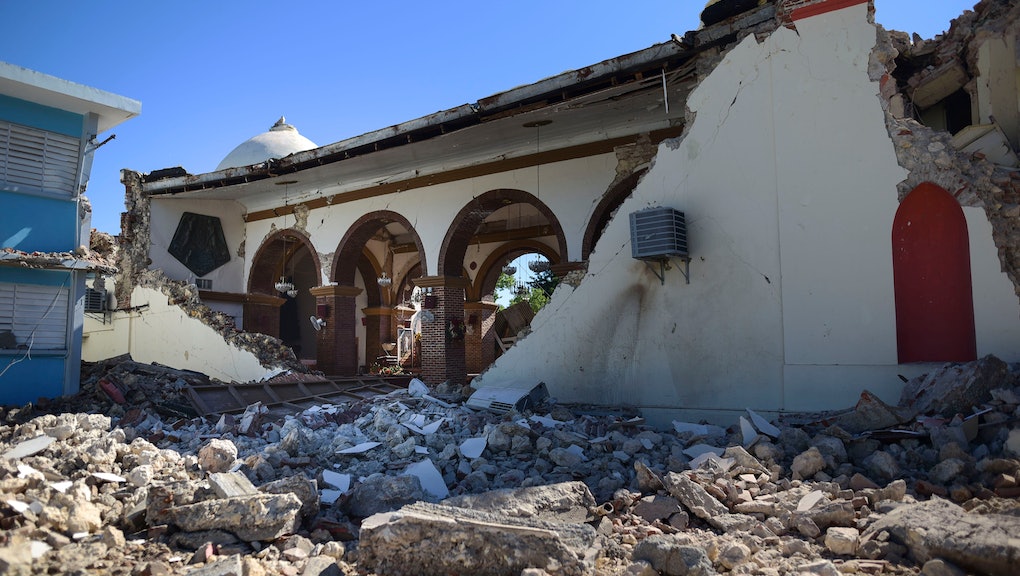 Since late December, a series of earthquakes have struck the Caribbean. As a part of the ongoing tremors, a massive earthquake hit Puerto Rico early Tuesday morning, leaving the small island in a state of emergency. With many parts of Puerto Rico still recovering from Hurricane Maria, the earthquake's impacts are undoubtedly magnified.

Registering at a 6.4 magnitude, this earthquake is the most powerful to strike Puerto Rico in over a hundred years. According to tweets by the U.S. Geological Survey, the quake struck around 4:24 am, and was followed by a 6.0 aftershock hours later.

The ongoing series of tremors had already caused damage to the island before the massive earthquake struck. On Monday morning, a 5.8-magnitude quake damaged homes and caused power cuts, according to the BBC.

After Tuesday's earthquake, Puerto Rico's governor Wanda Vazquez told a news conference that power outages had spread across the entire island. In addition, the earthquakes cut off drinking water to 300,000 people.

Because of the earthquake's power and damage, Vazquez declared a state of emergency and activated the National Guard. This declaration means the U.S. is supposed to issue financial aid to Puerto Rico.

Pete Gaynor, acting administrator of the Federal Emergency Management Agency (FEMA), tweeted that there were teams in Puerto Rico, New York, and D.C. "working hard to aid the ongoing response to the recent earthquakes on the island.

"I spoke with Governor Wanda Vazquez earlier and assured her we will continue to work in partnership to support the Commonwealth during this time," Gaynor wrote.

However, many people are not putting a lot of faith into FEMA. After Hurricane Maria, a category 5 storm, devastated the island and killed thousands in September 2017, the agency drew sharp criticism.

Researchers found distinct differences between the U.S. government's response in Puerto Rico compared to Florida and Texas, where Hurricanes Irma and Harvey hit in 2017. Scott Greer of the University of Michigan in Ann Arbor told Reuters the "“remarkable disparity in the speed and generosity of federal response . . . is probably large enough to help explain the vastly larger number of deaths."

For example, researchers found that Maria survivor funds didn't reach $1 billion until after 4 months, compared to two months for those on the mainland. This is disturbing because both Irma and Harvey were weaker hurricanes than Maria and were linked with less than 150 deaths each.

Gaynor rose to the position of acting administrator after Brock Long left the agency in Feb. 2019. While it's possible FEMA may issue a better response than it did after Hurricane Maria due to new leadership, a lot of criticism went past Long to President Trump.

In June 2019, FEMA representatives were called before the House Homeland Security Committee over inflated Hurricane Maria payments. There, Chairman Bennie Thompson (D-MS) referred to the federal response after Hurricane Maria as an "abject failure."

"Unfortunately, Puerto Rico continues to pay the price. People there are also still suffering from disparate treatment by the president who continues to tweet his disdain for Puerto Ricans working to help their communities recover," Thompson said.

It's clear that the federal government's lack of action in 2017 resulted in Puerto Rico not fully recovering and being more vulnerable today. Although the earthquakes have not left as many harmed, one person from the southern city of Ponce was confirmed dead and eight others were injured. Officials told Reuters that at least 346 people were left homeless. The tremors are ongoing today.