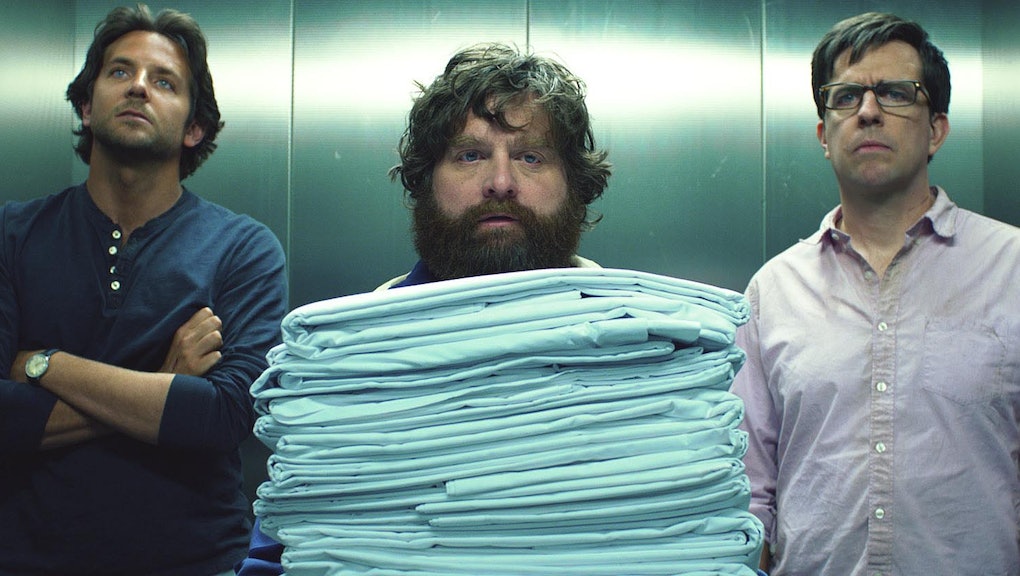 You know it when you see it: Horrible Bosses, Horrible Bosses 2, Game Night, Date Night, Rough Night, Bad Moms, Stuber, Blockers, Tag, We’re the Millers, Neighbors, Booksmart, Project X, 21 and Over. Let's call it the "One Crazy Night" genre of buddy comedy. Not all of these take place at night (and few are watchable) but they come from a place of similar ambitions. Where conventional buddy comedies have a defined and often linear structure, the One Crazy Night movie thrives on chaos.

One of the worst trends in cultural consumption over the past decade has been the de-emphasis of character in favor of plot, and the One Crazy Night comedy thrives in these terms. They are often about avoiding an ever-spiraling crisis that may be caused by the protagonist’s inaction, libido, or incompetence. In the most extreme cases, bodies start to pile up, though none of the protagonists are usually entirely at fault.

The films function like action movies without really being action comedies, since the murders are accidental and the origins of their violence are often repressed. These characters are typically jerked around by the film’s escalating developments, firing guns and drag racing for the first time along with the audience. Jason Bateman is usually involved in some way.

Much of the 2000s were gesturing toward this sort of unruly comedy, with Will Ferrell and Adam McKay's collaborations breeding the decidedly chaotic environment for these newer films to inhabit. The Ferrell efforts were a twisted cousin to Judd Apatow’s padded dramedies of the same era, which brought polo shirt vulgarity and newfound prestige to slacker films. There’s no doubting the agency of Brennan touching Dale’s drum set in Step Brothers, then really touching his drum set, which devolves into them beating each other up with golf clubs and bicycles in the front yard.

Like most seismic cinematic shifts, we have Todd Phillips to thank for what came next. For better or much more likely worse, Phillips has a habit of irreversibly changing mainstream movies as one decade turns into the next. Most recently this happened with Joker, which will likely position serious superhero character studies as a default genre of the ‘20s. But before that it was the breakout success of The Hangover in 2009. It’s ironic in hindsight that a movie that chose to omit its One Crazy Night would become the most influential template for the burgeoning genre.

The Hangover was one of those movies I didn’t see in theaters, but learned about secondhand from everyone in my high school liking Facebook pages named for quotes from the movie. As it became the best-selling comedy ever on DVD and Blu-ray, it thrived on a reputation of being a wild ride of a film. The hungover men in question find Mike Tyson and a tiger in their hotel room, get t-boned by gangsters, and fend off a naked Masked Singer judge who leaps out of the trunk and beats up the heroes.

Besides the enduring templates of franchise escapism, I don’t know if the common tropes of the 2010s can survive in an unrecognizable era.

The next decade would find audiences inundated with Hangover style antics. Horrible Bosses featured a trio of slackers who set out to murder their employer. In Rough Night, the characters accidentally kill a stripper. In Game Night, Rachel McAdams’ character fumbles around a gun, uncertain it’s real, and accidentally shoots Jason Bateman (there he is!) in the arm. The poster for Kumail Nanjiani and Issa Rae’s upcoming film The Lovebirds features the tagline: “All they wanted was a quiet night out." The film follows two young lovers who become unwilling accessories to murder.

The movie was set for an early April release, perhaps as counter-programming to Mulan. It might even have turned into a modest hit. Instead, it will be released straight to Netflix at an unspecified date in the future, as the film industry scrambles for escape hatches during the coronavirus pandemic.

It’s hard to imagine what the other side of this looks like, with staggering loss and financial crisis likely to change the fabric of America long beyond this year. There’s something quaint about wondering when we’ll be able to return to a movie theater again, or what those theaters will be showing. Besides the enduring templates of franchise escapism, I don’t know if the common tropes of the 2010s can survive in an unrecognizable era.

None of these films are especially inventive with their mania, and trade the novelty of misadventures for actual jokes and performance. The sustained trope of taking something conventional but making it crazy probably won’t endure, when we’ve suddenly grown accustomed to the most banal tasks feeling incredibly risky on their own. The One Crazy Night comedy can die in peace, so long as the quarantined slacker comedies filmed over Zoom don’t become the default mode we’re left with.