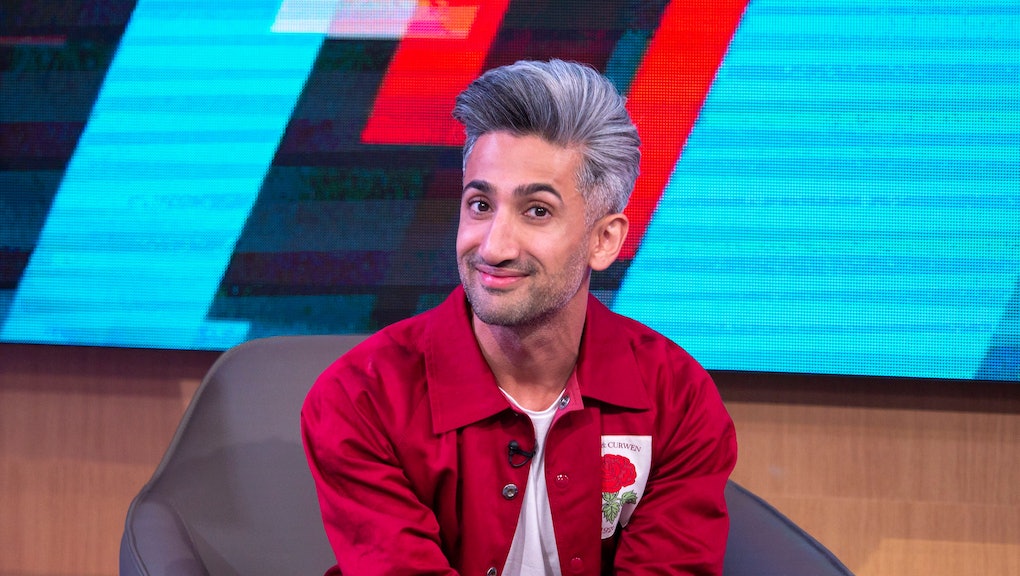 Fans may still be celebrating Netflix's recent renewal of Queer Eye for two more seasons, but followers of stylist Tan France now have another reason to rejoice. Buzzfeed reports that the Utah-based fashionista will star in his own makeover series, Dressing Funny with Tan France, in which the French tuck-loving France will offer solicited (and unsolicited) style advice to famous comedians ranging from Tina Fey to Pete Davidson.

Throughout the summer, episodes of the new show will be released at 12 p.m. EST, though the first episode with comedian John Mulaney dropped on Friday, June 21. A subsequent episode chronicling the style woes of Nick Kroll is slated to premiere on Saturday, June 22. Viewers need not be Netflix subscribers to watch the episodes, as the series will stream on Netflix's YouTube channel and its comedy-centric Instagram channel, Netflix Is A Joke.

In the trailer for the show released on June 21, it was revealed that stars including Ali Wong, Rachel Dratch, and Miranda Sings will all get the France makeover treatment.

Dressing Funny isn't the first time France has made over a comedian on-screen. In the first season of Queer Eye, the Fab Five helped aspiring stand-up comic Joe Gallois develop both his look and confidence. During the episode, called "Below Average Joe," France assisted Gallois with creating a signature look and building a brand, to much success.

Yet while most of Queer Eye's subjects, like Gallois, are not formerly established in the public eye, Dressing Funny showcases already well-known celebrities, all of whom already have arguably good style and confidence. So it will be quite entertaining to see how France critiques and alters his subjects' looks, if at all.

Fame differences aside, though, the new show seems like it'll share Queer Eye's sense of humor. "Will we laugh a lot? Yes," France promises in the trailer. However, the clip also features a few F-bombs, which hints that Dressing Funny may be a little less wholesome than the family-friendly Queer Eye.

As announced in mid-June, Season 4 of Queer Eye, which was filmed in Kansas City like the previous year, drops on Netflix on July 19. Season 5, which will be set in Philadelphia, will premiere in 2020. Like in other years of the Emmy-winning show, the new episodes will star the Fab Five — France, chef/food specialist Antoni Porowski, interior designer Bobby Berk, hair stylist and personal care guru Jonathan Van Ness, and life coach and culture expert Karamo Brown — as they help people of all genders and identities build confidence through self-care.

While Queer Eye follows a similar format in every episode, projects like France's Dressing Funny present the potential for more spinoffs and creative projects from the Fab Five in the future. Already, in the years since the Netflix show premiered, Brown has authored a book, Porowski has opened a restaurant, Berk and Van Ness have appeared in a Taylor Swift music video, and France himself has worked as a stylist on several high-profile projects, among other things. Clearly, the men keep busy when they're not filming Queer Eye, which is all the better for the show's devoted fans.

More like this
With this new bill, North Carolina is again at the forefront of the GOP's anti-trans push
By Rafi Schwartz
The GOP's anti-trans crusade is ramping up — and explicitly targeting kids
By Vanessa Taylor
The debut of 'Gutfeld!', Fox News's new comedy show, went about as well as you'd expect
By AJ Dellinger
Stay up to date