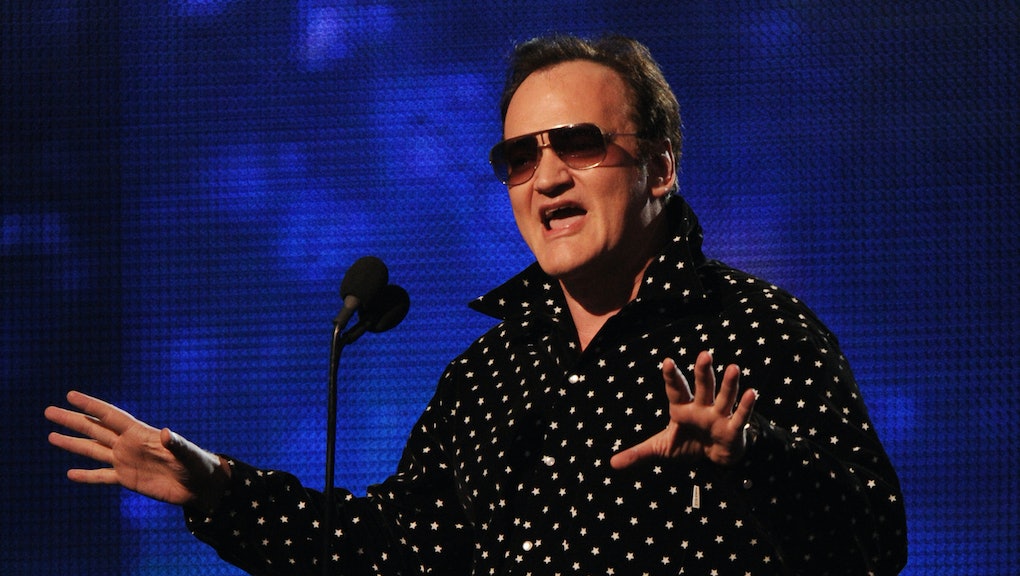 Quentin Tarantino has always been a brilliant idiot

Quentin Tarantino is the sort of visionary who only sees what he wants. In a recent interview on The Joe Rogan Experience, Tarantino doubled down on his portrayal of Bruce Lee in his 2019 film Once Upon A Time In Hollywood, telling critics to "Go suck a dick."

In the film, Bruce Lee, portrayed by Mike Moh, is an arrogant prick who claims he could cripple Cassius Clay in a fight before scuffling with stuntman Cliff Booth (portrayed by Brad Pitt) on the set of a film and being thrown by Booth into the side of a car. Lee's widow Linda Lee Cadwell described the portrayal was inaccurate and "insultingly Chinese-y," referring to stereotypical depictions of Chinese people. Tarantino says his portrayal of Lee was more accurate than he's been given credit.

"Bruce had nothing but disrespect for stuntmen and was always hitting them. He was always tagging them with his feet and his fists, and it got to the point where (they said), "I refuse to work with him,'” Tarantino told Rogan.

The source of his knowledge on Lee came from Matthew Polly's 2018 biography of Lee, Bruce Lee: A Life. He says the only person in the world who rightfully can criticize him over Lee's depiction in the film is his daughter Shannon Lee, since he's her father. In the span of a few sentences he admits his portrayal of Lee was based on the book by someone not related to Lee, and also understands why it would bother his daughter. Given Tarantino's penchant for choosing to offend in the name of art, he likely already knew it would anger Lee's daughter and decided to write it in anyway just like the dick he's asking all his critics to choke on.

What he probably didn't expect was that one scene messing with his money. A week before the film was set to be released in China, Chinese regulators snatched it from theaters and indefinitely put its release on hold. No explanation for the decision was provided by the regulators, however it has been speculated the film's removal was due to its portrayal of Lee, and was made after Lee's daughter made a formal plea to China’s National Film Administration for the film to change her father's portrayal. In 2019, China's film industry was responsible for more 21% of all the money made at theaters and all that was in between Tarantino's film getting a huge cash injection from the second largest film market in the world was removing a scene that wouldn't affect the film that much. What happened next is the most predictable Tarantino ending ever as the defiant filmmaker refused to recut the film.

You don't get a woman being revived from a drug overdose with a needle to the chest (Pulp Fiction) or a Western about a slave working with a bounty hunter to free his wife (Django Unchained) without bucking all conventions and putting no limits on creativity. Tarantino knows the lines you shouldn't cross, and sees it as a starting point instead of an impediment. Artistic license supersedes morality to a man who once defended his excessive inclusion of the N-word in his scripts using a reverse racism logic that, to this day, is one of the dumbest explanations that one of the greatest scriptwriters has ever produced.

"As a writer, I demand the right to write any character in the world that I want to write. And to say that I can’t do that because I’m white … that is racist," Tarantino said in a 1997 interview.

Decades later, after Django Unchained received criticism from people like Spike Lee who described the film as "disrespectful to my ancestors," Tarantino responded in a New York Times interview by saying "when the black critics came out with savage think pieces about Django, I couldn’t have cared less," because it doesn't matter to him if people don't "get" his movies. To add a cherry on top of a shit sundae, he also says the color of a writer's skin shouldn't matter.

He made Pulp Fiction...and said the N-word in it. He made Jackie Brown...and filled it with N-words. He made Once Upon A Time in Hollywood...and depicted a Chinese legend based on the words of a white male American. With Tarantino, idiocy and brilliance co-direct everything he ever does.

More like this
Films based on real life tragedy often lead to exploitation of real life people
By Chloe Stillwell
A crisis PR firm dragged the Golden Globes for its discrimination. Will it listen?
By Brandon Yu
Simone Biles is still a hero, and Piers Morgan is still garbage
By Chloe Stillwell
Stay up to date