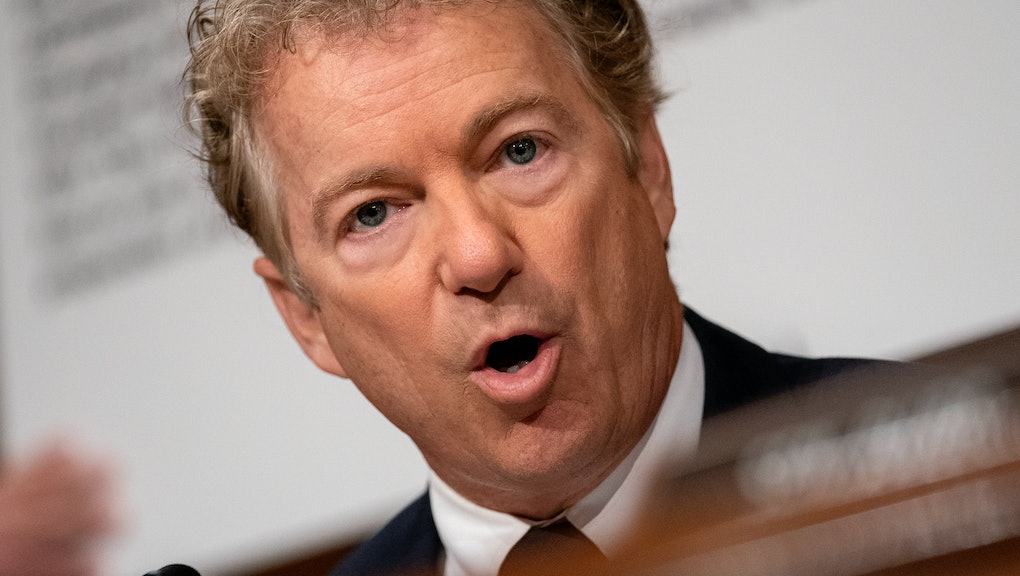 Kentucky Sen. Rand Paul has proudly broadcasted his disdain for a host of very simple measures — vaccinations! putting a thin piece of fabric over your mouth! — shown to help mitigate the spread and severity of coronavirus, including its currently surging Delta variant. Only, as Paul disclosed Wednesday, his family seems to have been playing both sides of our current public health crisis, with his efforts to seemingly prolong the disease's impact across the country counteracted by his wife's sizeable investment in a company that makes medication used to treat serious COVID-19 infections.

According to a Senate disclosure form filed a whopping 16 months past the 45-day deadline for these sorts of investments, Paul revealed that his wife Kelly had purchased anywhere from $1,000 to $15,000 worth of stock in Gilead, the pharmaceutical makers of remdesivir, a broad-spectrum antiviral treatment that was considered an effective COVID-19 treatment method during the early days of the pandemic.

Crucially, as The Washington Post notes, the Pauls' stock purchase came just days after World Health Organization officials touted remdesivir as the "one drug right now that we think may have real efficacy," which in turn prompted the U.S. Department of Health and Human Services to launch a clinical trial of the treatment.

Ultimately, as Paul's spokesperson pointed out to the Post, the family ended up losing money on the stock purchase at $74.70, rising to over $80 at its peak, before dropping to just over $69 this week. Nevertheless, the fact that it took Paul over a year to disclose the purchase (the spokeswoman claimed Paul had filled out the requisite forms on time, and only recently discovered they'd never been filed correctly — whoopsie!) coupled with multiple instances of his fellow Republicans getting dinged for their own shady pandemic-era stock purchases is enough of a red flag that it's prompted renewed calls to ban all lawmakers from playing the stock market entirely while they're in office.

Just one week before his belated stock disclosure, Paul went on TV to accuse Democrats of "plucking" unvaccinated migrants and embedding them in various communities "as if they're wishing to seed the country with a new variant."

Given that we now know his family bet on making big bucks off the pandemic, it seems reasonable to ask whether Paul's apparent obsession with keeping the virus as widespread as possible might be less an exercise in "liberty" and more an excuse for something much more American: exploitative capitalism.