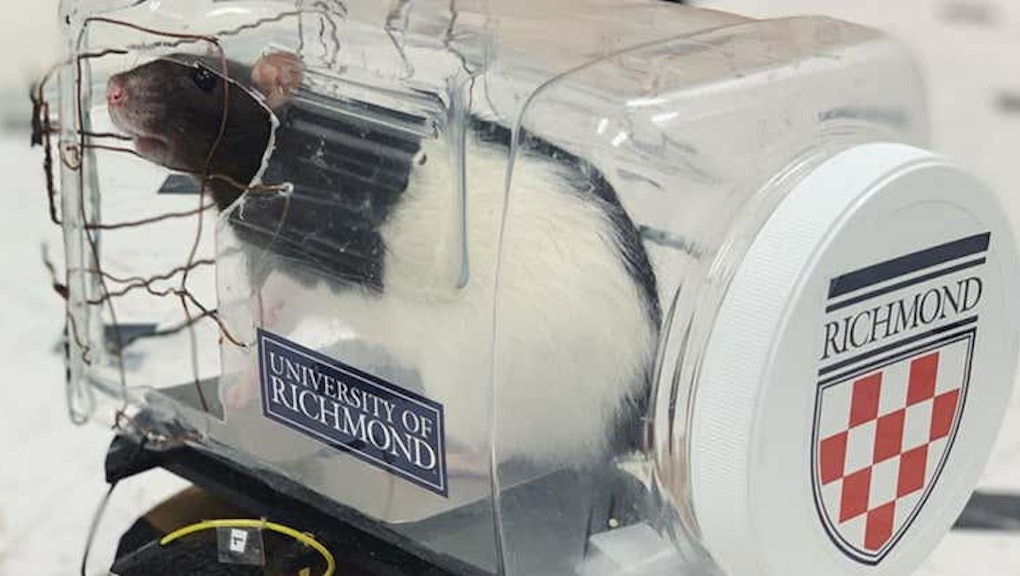 In a delightful study that sounds like a story you might've read as a child, researchers at the University of Richmond in Virginia have reportedly trained a group of rats to drive homemade cars. The findings in this study provides evidence that an animal's cognitive ability may be greater than what some people expect. It may also offer a step towards a better understanding of our own, human, mental health.

In the experiment, as reported by New Scientist, the rats were given a custom-made vehicle to drive. The car was built from a "clear plastic food container on wheels, with an aluminum floor and three copper bars functioning as a steering wheel." The rats had to learn how to hold the copper bars with their little paws to move the car. Depending on which bar they held, they could go forward, left, or right.

The reward for driving was, of course, delicious food. (I can completely relate.) The rats had to successfully navigate a small driving arena to find Froot Loops cereal placed in distant areas. It was a new experience for them that attested to the rats' ability to tackle challenges.

"They learned to navigate the car in unique ways and engaged in steering patterns they had never used to eventually arrive at the reward," said Kelly Lambert, the author of the study. "I do believe that rats are smarter than most people perceive them to be, and that most animals are smarter in unique ways than we think."

At least 17 rats were involved in the study. The rats were split into two groups, noted CNN; Group A was raised with toys and other mentally stimulating items in their environment. Group B had nothing but a regular, boring, laboratory cage. Lambert and her team found that Group A was better at driving, presumably because their brains were already strengthened through learning and playing with the toys in their environment. On the other hand, Group B struggled to successfully learn how to drive.

The researchers also found that both groups had more 'anti-stress' hormones as they mastered the art of driving. This reflected similar findings in humans who feel satisfaction after learning a new skill. In contrast, rats that were passengers in remote-controlled cars were noticeably more stressed out.

"It is likely that driving gives the rats a sense of control over their environment," Lambert explained to CNN. "In humans, we would say that it enhances a sense of agency or self-efficacy."

This is a cool connection to make because it presents humans with a possible way to protect our mental health. Just like with rats, these anti-stress hormones give us emotional resilience against other sources of stress that can negatively break down our health. The findings could imply that building up our sense of control through our successes, such as learning new skills, and keeping our minds active with a stimulating environment can help fight against mental illnesses.

So whether the mental image of a rodent driving a car makes you think about Stuart Little or The Mouse and the Motorcycle, try to keep in mind that it's also a reminder to keep learning new things. It'll build up the strength of your brain and make it flexible enough to help you pick up new skills. Plus, you know, we probably don't want the rats to get ahead of us. That's way too Secret of NIMH.