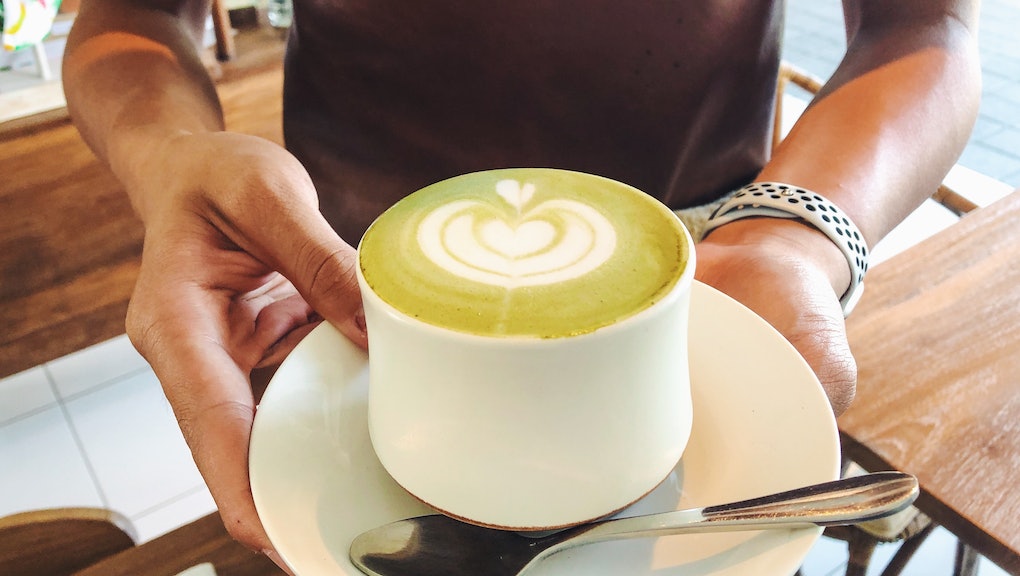 Lately, I’ve taken to making myself a cup of matcha to lift my post-lunch mental haze. Drinking matcha this late in the day doesn’t leave me lying awake at two in the morning the way coffee does (a lesson I’ve learned the hard way). Its unmistakable flavor and IG-worthy hue don’t hurt, either. Real matcha has pretty much everything you could want in a caffeinated drink, which might explain why we’re seeing it everywhere. While it’s easy to get swept up in the hype, it’s important to be intentional, too, since some types of matcha are more ethically sourced and produced than others. How can you drink matcha at least kind of responsibly?

First, some background on the earthy brew: Matcha is made from green tea leaves specially grown in Japan that have been ground into a fine powder — a centuries-old, labor-intensive process that Lauren Purvis, CEO of Mizuba Tea Co., recently described to me. Preparing a cup of matcha involves whisking it in hot water until it turns frothy. (Here’s a video showing this process.)

The highest quality matcha comes from Uji, a city outside Kyoto, Purvis says. “Uji is the historical home of matcha,” she explains. “Uji to Japan is like Bordeaux to France, so it’s very revered for being the birthplace of tea in Japan.” The first batch of matcha is thought to have been produced in Uji in the 16th century, according to the Uji-cha Tea Cultural Landscape page.

“The good news is that Japan does things really well,” Purvis says. That is, it doesn’t face the same labor and sustainability challenges that many other tea-growing regions do. For the most part, tea operations in Japan — some of them centuries-old — pay employees a living wage and treat them well. And even non-certified organic matcha is often grown using sustainable practices, such as fertilizing with fish, or planting other species around the tea field to promote biodiversity.

While insisting that only powdered green tea that meets certain qualifications can be sold as “matcha,” might seem purist or pretentious, it’s actually a matter of preserving a centuries-old tradition that doesn’t necessarily square with modern-day demands for more product, made faster and cheaper. “By being picky about the matcha that you buy, you can continue to help preserve some of these traditional heritage agricultural practices and slowly help them scale,” Purvis says. “When there’s this huge demand, people scramble to meet it really quickly, and that’s when corners are cut,” leading to a proliferation of powdered green tea that isn't matcha.

Doing the research to confirm that any powdered green tea you buy is actually matcha can ensure that your hard-earned coin benefits businesses that are keeping traditional matcha production alive. According to Purvis, matcha can only be considered matcha if:

Because of its deep roots in Japan, Uji in particular, matcha receives specialized care and attention here that isn't found elsewhere, Purvis says. Japan also imparts matcha with its terroir, a term you might’ve heard in reference to wine or coffee, which Purvis defines as “the characterization of taste,” shaped by variables like climate, soil, elevation, weather fluctuations in a given year, and cultivars used. (Very simply put, cultivars are plants that farmers produce through selective breeding to preserve certain flavor and growing characteristics.)

All of this is to say that “if you have a green tea that’s been powdered in a different country, it won’t have the revered flavor of, say, a stone milled tea that’s grown in Japan,” Purvis says.

Matcha is one of the only shade-grown tea plants, which means that after they grow in the sun most of the year, farmers cover them with tarp, usually about three to four weeks before harvesting them, Purvis says. “That inhibits photosynthesis, and the plants strain to complete that cycle,” she explains. “As they strain to do so, they concentrate all their nutrients in the leaf.”

In the shade, the plants concentrate chlorophyll, a pigment that gives matcha its vibrant color, as well as the amino acid L-theanine — which tastes sweet — in the leaf. In the sun, they concentrate the antioxidant epigallocatechin gallate, which tastes bitter.

“So the true art of matcha is when the producers have to mitigate the shade growing versus the sun,” Purvis says. The farmers need to tap into their deep knowledge of the plant and the climate to gauge when to add the tarps in order achieve the perfect blend of sweet and bitter. If you come across a powdered green tea that hasn’t been shade-grown, or has only been shade-grown a few days, it’s not matcha.

It’s made from tencha

“Tencha” refers to tea leaves that have been properly shade-grown and harvested for that distinct, vibrant green color, before they get ground into matcha, Purvis says. “When you see matcha in the market, if people advertise that this is from shade-grown tencha, then you know that they’re serious.” Not made from tencha? Not matcha.

Tencha can be considered matcha only if it’s been ground in a stone mill, or ishi-usu, Purvis tells me. Historically, these manual mills would take an hour to grind a mere 40 grams of tea (some still do), about the same amount in one of Mizuba Tea Co.’s tins. They revolve slowly, so as not to generate too much heat, which can oxidize the tea, yielding bitter, brown, not-so-tasty matcha. A good ishi-usu grinds matcha to an uber-fine one micron in size.

That said, a conversation is unfolding across Japan about how to meet the huge demand in matcha while maintaining traditional practices that prioritize flavor, Purvis says. The rise in demand has allowed producers to innovate with much faster ceramic mills, for example. But in Uji and Kyoto, “there’s a little more special attention to… ‘Let’s do it the traditional way, and this is what we’re going to strive to do to just make sure it survives.’”

Now that you know what producing matcha entails, its price point should come as less of a surprise. Many people balk at the $20 starting price Mizuba Tea Co. charges for its matcha tins, Purvis says. As with so many commodities, “there’s a higher demand to have volume at a cheaper price. How does that do justice to the people who make it in the country where it’s coming from?” These prices support their livelihood, as well as the time and money they invest into their craft.

Matcha is a buzzy beverage at the moment, but it’s also so much more. Part of what draws me and so many others to it is the ritual of preparing and enjoying a cup, which requires a mindfulness, a slowing-down. Those of us who can afford to should apply the same approach to help sustain the traditional art of matcha production and the people behind it.

More like this
An ode to quarantine meals that got us through the pandemic
By Melissa Pandika
The benefits of rose tea, explained
By Tracey Anne Duncan
Legal weed packaging is wrecking the planet. What are we going to do about it?
By Mark Hay
Stay up to date