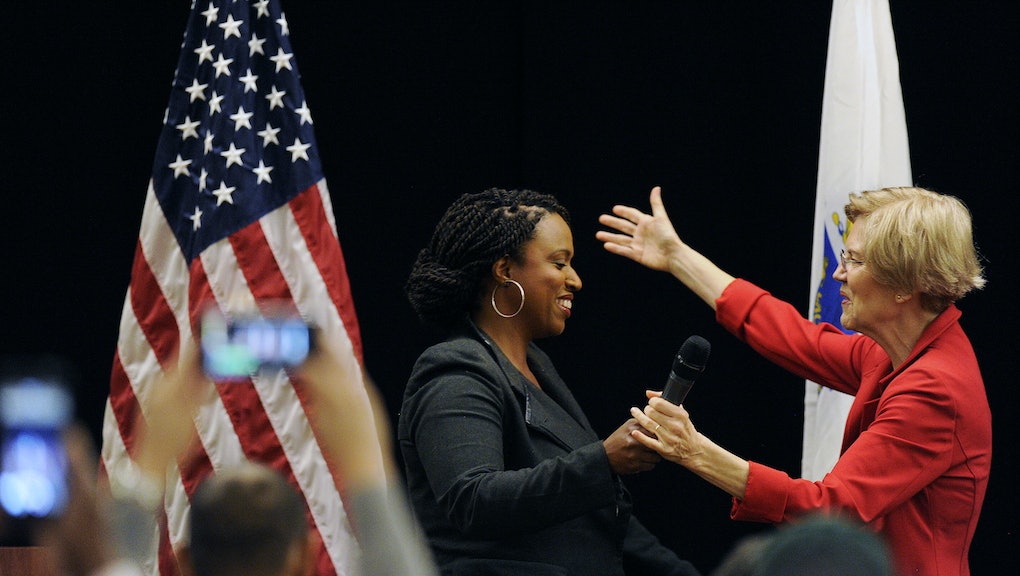 Rep. Ayanna Pressley endorses Elizabeth Warren, breaking with the rest of The Squad

Massachusetts Rep. Ayanna Pressley broke with the rest of “The Squad” on Wednesday when she endorsed Sen. Elizabeth Warren, a fellow Bay Stater, for president. The other members of the high-profile clique of progressive first-term lawmakers — New York Rep. Alexandria Ocasio-Cortez, Minnesota Rep. Ilhan Omar, and Michigan Rep. Rashida Tlaib — all endorsed Vermont Sen. Bernie Sanders last month. In 2018, Warren did not weigh in on Pressley’s race against incumbent Democratic Rep. Mike Capuano, who had been in the House for 20 years, but after Pressley won the primary for her seat last fall, she traveled with Warren to Georgia to stump for Stacey Abrams in her gubernatorial race.

“I have seen Elizabeth in small church basements and in packed gymnasiums, and she is consistent. She never loses sight of the people,” Pressley said in her endorsement video. “You’ve all heard about the senator’s plans — but here’s the thing. Her plans are about power: who has it, who refuses to let it go, and who deserves more of it.” Pressley said that she and Warren share the view that "power belongs in the hands of the people."

Ocasio-Cortez almost immediately commented with a heart on Pressley’s endorsement video, signaling that even supporters within Democratic Party's progressive bloc may echo the mostly collegial race that Sanders and Warren have been leading themselves.

Pressley, 45, has already had a groundbreaking political career. In 2009, she was the first woman of color to be elected to the Boston City Council. In 2018, she became the first Black woman to be elected to Congress from Massachusetts. These bonafides could help Warren, who has surged to second place in the RealClearPolitics polling average but lags behind the Democratic frontrunner, Vice President Joe Biden, in support among Black voters — one of the most influential constituencies of the Democratic Party in this primary.

In her congressional primary campaign, Pressley became known for her campaign message that “Change can’t wait,” a line that was often worked into her speeches. In this presidential primary, Warren has called for “big structural change.” At the end of her endorsement video. Pressley merged their two messages.