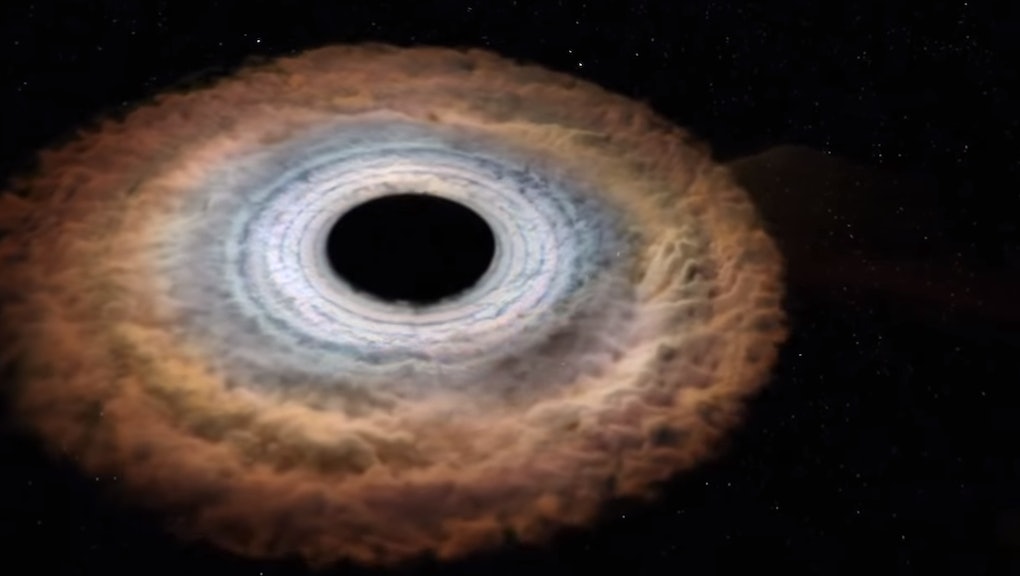 Thanks to sci-fi films and general pop-culture fascination we're all familiar with the supermassive black holes floating out there in space. Die-hard black hole fans might also know there are smaller, stellar-mass black holes that exist as well. But what about medium-sized black holes? Astronomers have looked for them for years, but until recently didn't have much hard evidence that they exist.

Called 'intermediate-mass' black holes (IMBH), these space phenomena have been difficult for astronomers to find due to their middling size. So difficult, in fact, that IMBHs have been mostly theoretical. There were a few black holes that were considered possible IMBH candidates in years past, but hard-hitting proof of this mid-sized white whale has been scant.

But now, thanks to the collaborative efforts of astronomers and the Hubble Space Telescope, the greatest evidence for the existence of IMBHs has been discovered. And it's all because of the black hole's appetite.

In a report published in The Astrophysical Journal Letters on March 31, a team of researchers followed previous findings made in 2006 to pinpoint a possible IMBH. They used the Hubble Telescope to find it, noting that it wasn't in the center of a galaxy but on the outskirts, where one would expect to find an IMBH. They could estimate its size based on its shape, but the true IMBH test came when a stray star wandered too close to the black hole. The team watched as the black hole tore apart the star and consumed it within itself.

The ability to eat a star provided the best evidence of its middling size. Small, stellar stars are too small and weak to tear up another star. And supermassive black holes are generally in the center of large galaxies. A black hole that is on the edge of a galaxy, yet strong enough to break apart a star, suggests it's an IMBH.

This is why it's been hard to locate IMBHs, explained NASA in a statement: "IMBHs have been particularly difficult to find because they are smaller and less active than supermassive black holes; they do not have readily available sources of fuel, nor as strong a gravitational pull to draw stars and other cosmic material which would produce telltale X-ray glows. Astronomers essentially have to catch an IMBH red-handed in the act of gobbling up a star."

And that's exactly what happened when the team saw the black hole. "The main difference is that our object is tearing a star apart," research team lead Dacheng Lin said in the NASA statement, "providing strong evidence that it is a massive black hole, instead of a stellar-mass black hole as people often worry about for previous candidates[.]"

Lin and his team are hopeful that the methods they used to discover this strong, IMBH candidate can also be used to discover more unknown elements in space. As for this IMBH, it can continue being observed to learn new things such as whether IMBHs can grow to become supermassive black holes and how they form.

More like this
Space debris from a rocket launch is currently hurtling toward Earth
By AJ Dellinger
Climate change has literally knocked the Earth off its axis
By AJ Dellinger
Perseverance, the Mars rover, just made oxygen out of carbon dioxide
By AJ Dellinger
Stay up to date